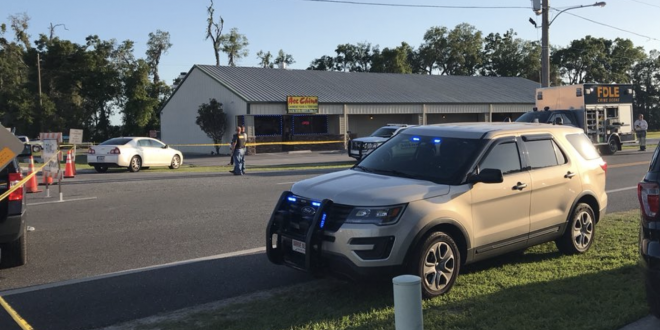 Updated, April 20 at 3:40 p.m.: Gilchrist County woke up today, not to a happy end of the week, but to a Friday filled with sorrow, mourning and questions.

Questions about why a man, identified as 59-year-old John Hubert Highnote, of Bell, walked inside the Ace China Restaurant in Trenton and gunned down Sgt. Noel Ramirez and Deputy Taylor Lindsey while they ate. After killing the two lawmen, officials say Highnote got into his vehicle, where he then shot and killed himself.

Gilchrist County Sheriff Bobby Schultz found himself talking to the community Thursday night about what happened.

Sheriff Mark Read was the last Gilchrist County law enforcement officer to be killed in the line of duty; in 1956, he was killed when responding to a drunk with a shotgun.

What led Highnote to do what the sheriff’s office says he did is unknown. The Florida Department of Law Enforcement is looking into his background.

His home in Bell sits off the main road and ten minutes down a dirt path. Three cars from Gilchrist County Fire and Rescue were parked in the driveway Friday morning as firefighters boarded up windows and doors.

Highnote’s home is older and flanked by his neighbor’s crops and several hundred yards of trees. The garage appeared to have been pried open. A dirty black Ford pick-up truck was parked inside. Glass from the windows and doors lay scattered across the ground.

Sgt. Ramirez had a wife and two children. He had been in law enforcement seven years, joining the Gilchrist department in 2016. Lindsey had been with the agency three years.

Police set up for a couple of blocks along 6th Street. @WUFTNews @TheAlligator @GainesvilleSun pic.twitter.com/roWg6eRtI0

The cars were set up for a procession for the officers killed in Gilchrist County on Thursday. They were going to the coroner’s office on the corner of sixth street and third avenue. @TheAlligator @WUFTNews @GainesvilleSun

A multitude of officers seen standing at attention outside the coroner’s office. @TheAlligator pic.twitter.com/fRxgGOpaiv

Updated, April 19 at 8:58 p.m. Two members of the Gilchrist County Sheriff’s Office were shot and killed in the Ace China restaurant in Trenton today.

Sgt. Noel Ramirez and deputy Taylor Lindsey died from gunshot wounds after the suspect shot them while eating lunch at approximately 3 p.m., according to law enforcement.

Ramirez was a seven year veteran who previously had worked for the Levy County Sheriff’s Office and Williston Police Department before joining GCSO two years ago. He was promoted to sergeant a year ago. He was married with children, according to Gilchrist County Sheriff Bobby Shultz.

Deputy Lindsey recently returned to GCSO after a previous stint. He was not married, but did have a girlfriend, according to Shultz.

GCSO posted on March 31 this photo of Ramirez, far left, and Lindsey, second from left, on their Facebook page:

Shultz said he is not releasing the name of the shooter at this time.

Florida governor Rick Scott said in a release, “My wife, Ann, and I are heartbroken by the loss of two law enforcement officers in Trenton. I have spoken with the Gilchrist County Sheriff’s Office and committed all available state resources they may need.”

“My heart breaks with the tragic news of two Gilchrist County deputies that were senselessly killed today while in the line of duty. The daily risk that law enforcement officers take to protect our communities is overwhelming. My deepest condolences and prayers are with their families as they mourn the devastating loss of their loved ones. May their families, friends and fellow officers find peace and comfort during this very difficult time.”

President Donald Trump tweeted about the shooting offering his condolences to the sheriff’s office and families of the slain officers.

My thoughts, prayers and condolences are with the families, friends and colleagues of the two @GCSOFlorida deputies (HEROES) who lost their lives in the line of duty today.

Shultz said the shooting remains an active criminal investigation with no apparent motive.

Shultz spent the afternoon notifying the families before speaking to media this evening.

Original post, April 19 at 5:25 p.m.: The Florida Department of Law Enforcement has confirmed there was an officer-involved shooting in Trenton this afternoon.

There are not yet confirmed fatalities, but the Gilchrist County Sheriff’s Office tweeted out the following at 5:10 p.m.:

GILCHRIST COUNTY SHERIFF'S OFFICE has suffered a terrible tragedy. Please avoid the area of SR 26 from the red light to the area of subway. No suspects are at large. Further updates will be posted later.

FDLE spokeswoman Gretl Plessinger told us at 5:15 p.m., “Our agents have responded to the scene of an officer-involved shooting in Gilchrist County.”

Columbia County was the first law enforcement agency to post a report of the shooting on Twitter. It later deleted this message: 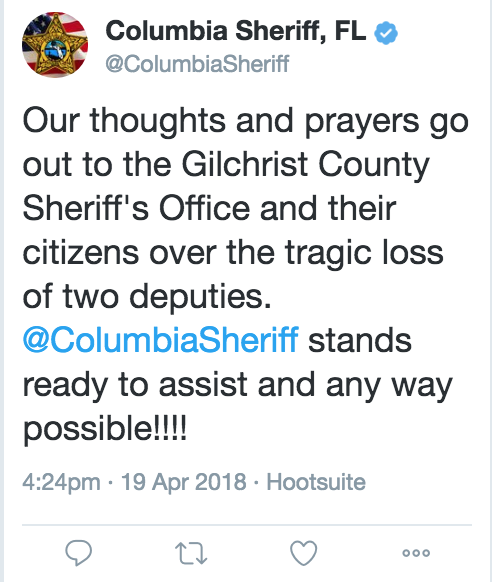 Clarification appended: Law enforcement previously said the suspect shot and killed the two deputies from outside the window, but on Friday afternoon said the shooting took place within the restaurant.