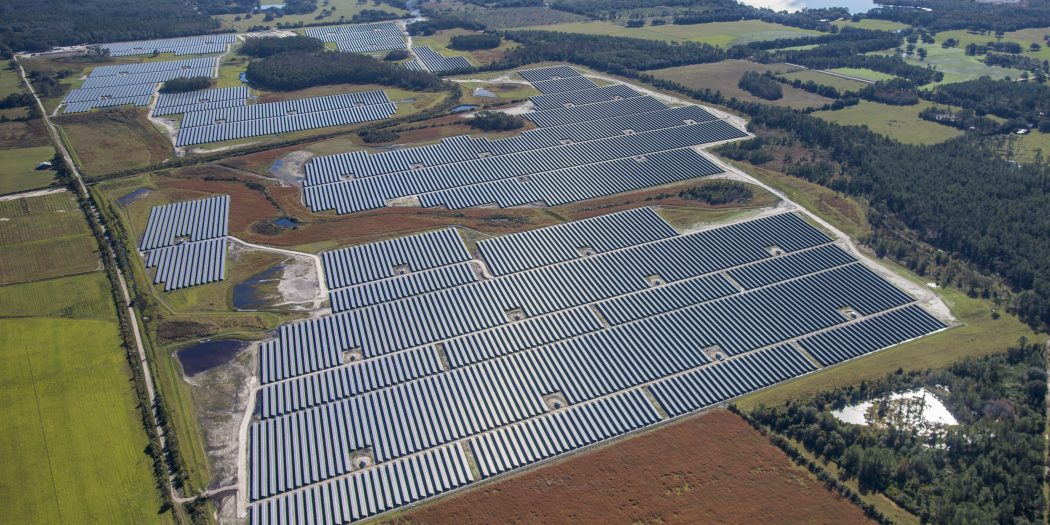 The complete map of the solar plant straddling Alachua and Putnam counties. (Courtesy of FP&L)

Florida Power and Light’s new solar plant in Melrose is fully operational, lowering the bill for customers across Florida.

Located just south of State Road 222 and west of State Road 21 off Price Road between Hawthorne and Melrose, the plant, about the size of 130 football fields, has been up and running since Jan. 1.

The solar plant, along with three other plants that also opened in the start of 2018, offered savings for customers of $1.74 per 1,000 kWh, according to FPL spokesman Stephen Heiman. This will directly affect the 27,000 customers in North Central Florida.

“The solar plant is a benefit to all FPL customers throughout Florida and it has no emissions,” he added.

The drop in the bill comes from the decrease in the overall fuel cost for the company.

The plant is situated in a field on the border of Alachua and Putnam counties. It contains 330,000 solar panels, generating a total of 74.5 megawatts to power 15,000 homes across the state, according to Heiman. The total cost for the project was around $107 million, he said.

The project started in late 2016 as part of FPL’s solar energy expansion. FPL chose the plot of land based on a few factors: cost, land attributes and proximity to FPL infrastructure, Heiman said.

Surrounding residents were not happy. Amy Zachkowski, who lives half a mile from the solar plant, complained to FPL directly.

“We did not want it here. We wanted the land to remain agricultural and to protect our wildlife in the area,” she said. “We tried to convince our county board members that it wasn’t a good idea, but that was unsuccessful.”

Zachowski was most frustrated by the fact that the solar plant doesn’t serve the area, she said.

However, once the energy goes into the power grid, it can go anywhere in the state, Heiman said. In fact, customers closer to that plant will probably receive more of that solar energy.

Construction on the plant began in March of 2017 and finished on time for the start of 2018. Throughout the building process, FPL negotiated with residents and worked with several environmental organizations, such as Audubon Florida, to make sure needs were met.

“We build out the sites to minimize environmental impacts,” Heiman said. “We are planting native species that will attract honeybees and hummingbirds to the area and create a safe haven for them.”

Laura Berkelman, president of Santa Fe Audubon, said the company agreed to plant a meadowlark habitat in the area that’s not covered with panels.

Heiman said most of the plantings have been completed, and the ones that haven’t will take place during the year as part of their “Solar Sanctuary” program.

Berkelman said the company left all the ponds and wetlands intact, and that FPL said it would leave turkey oaks for fox squirrels to feed on.

As for the residents in the area, the construction period caused many issues, Zachkowski said.

“Our wildlife movement has definitely decreased,” she said. “We were trying to have a wildlife corridor pass through. FPL did move the fence back, but there aren’t any openings in the fence so we haven’t seen the turkey movement we normally do.”

Berkleman said the fencing might affect the deer but not the turkeys.

“Turkeys can fly, so there is no issue with the fence. In fact, the area was fenced before,” she said. “You don’t want the deer running into a dangerous area with the panels, and the fence stops that.”

For Patsy Frenchman, a resident who lives only a quarter-mile from the plant, the impact on animals like fox squirrels was the biggest concern.

“It primarily has to do with all of the fencing,” she said.

To satisfy their concerns, Heiman said FPL did add crossing areas near the surrounding ditches that allow wildlife to safely travel through. He said birds also like to perch on the solar panels and take shelter under them.

But Zachkowski said the issues weren’t strictly environmental. She was also upset about the location of the entrance and the construction lights. She said the company would promise one thing, then do another.

“We’ve had to fight to get them to stick to their word. I’m not sure if it’s blatant dishonesty on their part or just failed communication as the folks making promises are rarely the folks actually doing the work,” she said. “It seems once assignments left their hands, their promises were harder to see put into action.”

With time, FPL negotiated and followed through on many of the issues, but some issues remained the same, she said.

“We woke up to construction noise every day,” she said.

Since the plant construction has been completed, most complaints were put to rest.

“They have negotiated with us the best they can. In a perfect world it wouldn’t be here, but it is, and there’s nothing we can do about it,” she said. “I just hope that they continue to respect our wishes and make it as invisible as possible.”

Now that the solar plant is complete, FPL will continue to expand its solar energy in other areas of Florida, possibly North Florida, Heiman said.

Correction appended: A previous version of this story said the farm can power 150,000 homes statewide, though it’s actually 15,000.

Cat is a reporter for WUFT News and Fresh Take Florida who can be reached by calling 954-657-3385 or emailing cgloria@ufl.edu.
Previous FWC To Conduct Aerial Spray Of Herbicide On Orange Lake
Next Florida Farmers Say Year-Round Daylight Saving Time Should Be Nationwide