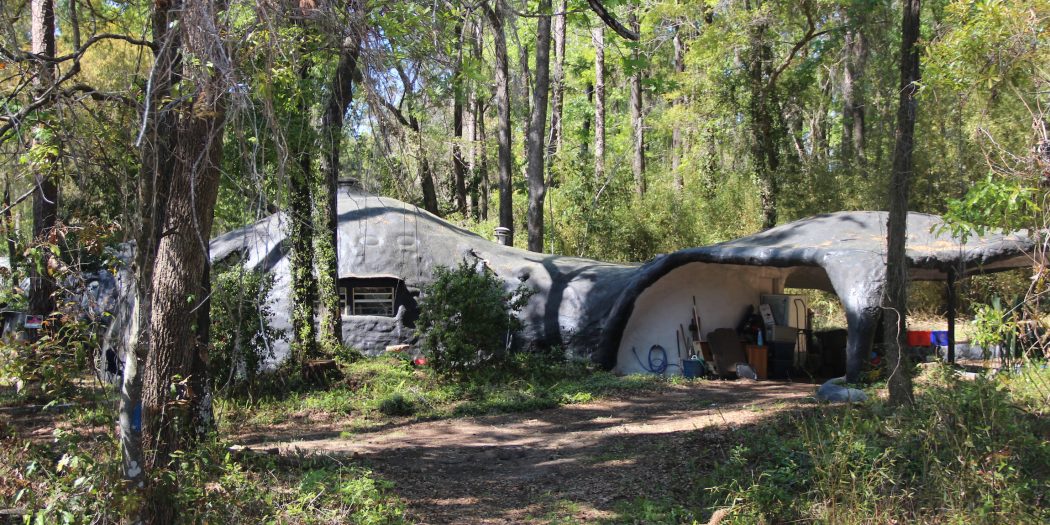 Although the Foam Home lies right off of 39th Avenue, the odd design and dark color can go completely unnoticed by drivers passing by.
Home / Untold Florida: Your Neighborhood, Your Story / Gainesville’s Forgotten Foam Dome Lives On And Attracts Roadside Attraction Enthusiasts

Just steps off of 39th Avenue lies a blob of a building.

Composed of polyurethane foam painted a dull black, the two connected igloo-like domes and cavernous awning stretch up from a densely wooded yard. The four-bedroom, two-bathroom structure, which toes the line somewhere between alien and prehistoric, sticks out like a sore thumb from the relatively modern houses around it.

This is the Foam Dome, once a house of the future that’s now a trinket of the past.

Although a unique building to Gainesville, this eye-catching structure is actually not the first of its kind.

A project outlined in Roy Mason’s 1983 book “Xanadu: The Computerized Home of Tomorrow and How It Can Be Yours Today!” detailed the most well-known Xanadu home in Kissimmee, Florida. The first Xanadu house was created by Bob Masters in the late 1970s in Wisconsin.

As time passed, the Kissimmee home and once-popular tourist attraction slipped into decline, finally meeting its end in 2005 when it was torn down.

In a 1994 Orlando Sentinel article Xanadu creators were quoted as saying about 1,000 homes of this type were built by that time.

Gainesville’s Foam Dome could be one of these homes, although it’s been mostly forgotten by time. While some forums online claim that the home was created by the University of Florida as a prototype to the Kissimmee home, there is no documented evidence about it.

“A lot of these [homes] can fly under the radar for a long time until it’s kind of almost too late,” Christine Madrid French, an architectural historian and University of Florida adjunct professor, said about the Foam Dome. “The building definitely has historical significance, but it is relatively unknown and undocumented.”

Despite this, curious roadside attraction enthusiasts and locals alike occasionally take notice, with some putting in the work to keep the house alive.

Xanadu homes came from Masters’ idea to create “homes of the future.” Using polyurethane foam, the houses could be made quickly and efficiently. The homes also served as distant predecessors to the smart homes of today, as they featured some of the first-ever home automation systems. As technology quickly caught up and the odd home design failed to catch on, Xanadu homes became tourist attractions before meeting their eventual demise.

Brian Esser, a roadside attraction lover and musician from Orlando, has been interested in Xanadu homes ever since he learned about them around 2007, just two years after the Kissimmee home destruction.

“I was just upset that my parents had never taken me there before,” Esser said. “It’s just so quirky – it’s just an interesting place.”

Esser discovered Gainesville’s Foam Dome eight months ago through an online forum from 2005.  After moving to Tampa, Esser made the trek to the Foam Dome’s address while in Gainesville for a concert in early March.

“I was like, ‘If I don’t see this house and it gets bulldozed, you know, just like the other one, I’ll be so frustrated at myself,’” he said.

To his pleasant surprise, Esser saw that the home remained and had even received some updates.

In fact, after years of abandonment, the Foam Dome is officially inhabited as of this month.

Around this time last year, the home caught the eye of British publication Daily Mail. Although the address was left out, a video from a roadside traveler clearly shows the Foam Dome in a state of disrepair. The overgrown building did seem to be wasting away with vegetation crawling up the sides and graffiti painted on the awning.

Come July, the house and property were purchased by a new owner. Alachua County property records mention Daniel Bui as the owner, with Realtor.com tracking the purchase to July 2017 for $50,000.

Instead of tearing the Foam Dome down to build a more modern home, the new owner renovated and made the house inhabitable once again.

Cari Iademarco, the Gainesville local who currently rents the Foam Dome with her husband, four sons and their dog, Mimi, has also been a longtime fan of Xanadu homes. Now in her 40s, she’s affectionately kept an eye on the Foam Dome for decades.

When passing the house in early March, Iademarco and her husband noticed a ‘For Rent’ sign posted on the property. She and her family moved in right away.

From the concrete floors to the circular shape, the home is certainly unconventional. Even so, Iademarco looks forward to adding her personal touch to it.

“The space is a little different,” she said. “I’m going to have to get creative with the walls.”

Despite all the challenges a structure like the Foam Dome may represent, from the inability to hang pictures to the complex electrical wiring, Iademarco said she’s happy to finally live in the place she’s admired for so long.

Natalie is a reporter for WUFT News who can be reached by calling 352-392-6397 or emailing news@wuft.org.
Previous Vineyard Pastor Takes Pulpit To The Pub
Next March 26, 2018: Afternoon News in 90