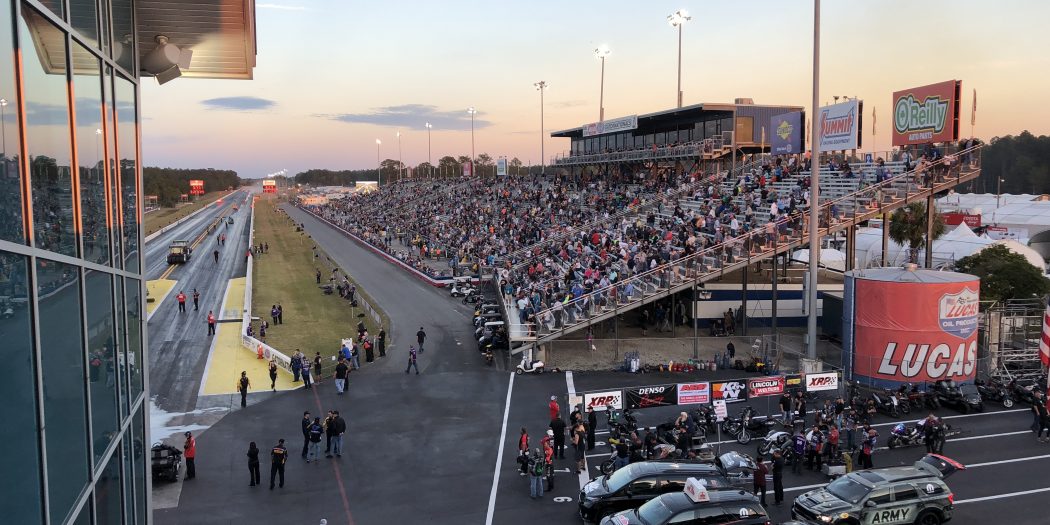 Fans from all over the nation come to Gainesville Raceway to watch Gatornationals. As the sun sets Friday night after a long day of racing, the stands and crowds are still beating previous raceway attendance records.

While the racing world has seen declines in popularity, Gainesville Raceway has still seen an increase in ticket sales and participation.

One of the fastest tracks on the National Hot Rod Association circuit, the raceway opened in 1969 and has been a large part of the drag racing community ever since. Home of the first ever 260-, 270-, and 300-mph runs, the raceway hosts one of the NHRA’s biggest events: Gatornationals.

“We’ve seen double-digit increases in the last year, and the 2017 Gatornationals was the biggest since 2008 as far as attendance and income,” said Mike Yurick, track manager at Gainesville Raceway. “Pre-sale tickets for the 2018 event ran about 10 percent higher than 2017.”

Gainesville Raceway also holds eight out of 10 national records for professional racing classes. However, the raceway isn’t only for record-breaking events and huge crowds.

Smaller events and regional races are what make NHRA so popular, Yurick says. Races and events take place at Gainesville Raceway almost every weekend, year-round. And drag-racing fans like the community environment and say its a place that is welcoming to families.

“NASCAR feels more closed-door and fanatical. You’re talking crowds up to 100,000 people, so there has to be separation to get things done,” Yurick said, “But here at the raceway and doing drag racing, our saying is that every ticket is pit access. You buy a general admission seat but you’re welcome to walk around and watch even the big names work on their cars.”

Gainesville Raceway has a separate road course in the back used for vehicle testing and for driving schools. The road course is also where you can find hundreds of motorhomes and trailers owned by members of the NHRA community who travel for these races.

“Especially drivers in the same division of the NHRA, they travel together and know each other and see each other every week. The kids play together, run Jr. Dragsters, and then grow up to drive the big cars. They grow up together as a community,” Yurick said.

Angela Recchia, a long-time part of the racing community, grew up with NASCAR but has grown to prefer NHRA. Recchia is from Holiday, Florida, but makes the three-hour drive to the Gainesville Raceway monthly to participate in races and put on her car shows.

“I love that track so much, I don’t mind the drive,” Recchia said. “I love participating in drag racing because you feel more recognized. I am so passionate about that feeling, that’s why I don’t mind going out of my way, and that’s why drag racing will always be a part of my family.”

Recchia said one of her favorite drag racing memories is racing at Gainesville Raceway and having her fiancé there to watch her.

“When my fiancé is in the stands supporting me, that is priceless for me,” Recchia said. “There is a video of him that I love. He is watching me and his reaction when I won, he couldn’t believe it.”

Recchia has a pet tiger, and there’s a painting of the two of them on the back of her car that she designed herself. She also hosts car shows and often donates all proceeds to wildlife causes. Recchia has become known within the drag racing community as “Tiger Lady”.

“Racing is my passion and I use it to give back,” she said. “A lot of people don’t realize that drag racers actually do a lot for their communities. You have to give back.”

According to Joseph Anderson, media relations manager for the NHRA, many racers sponsor different platforms and donate money to their community.

“We go out there and we do things to raise funds, that’s what our race team has done,” said Jack Beckman, an NHRA Funny Car racer. “The money goes to a grand committee and we pick the programs that we think make the most impact.”

Caroline is a reporter for WUFT News and can be contacted by calling 352-392-6397 or emailing news@wuft.org.
Previous Morning News in 90: March 22, 2018
Next From Parkland to Gainesville to D.C., Follow WUFT’s Coverage of ‘March For Our Lives’ 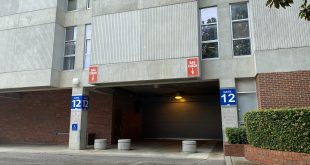 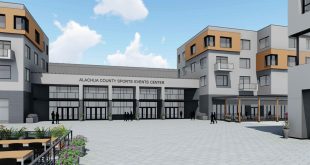 Construction of the new sports complex is expected to begin in September with an estimated completion date of early 2023.