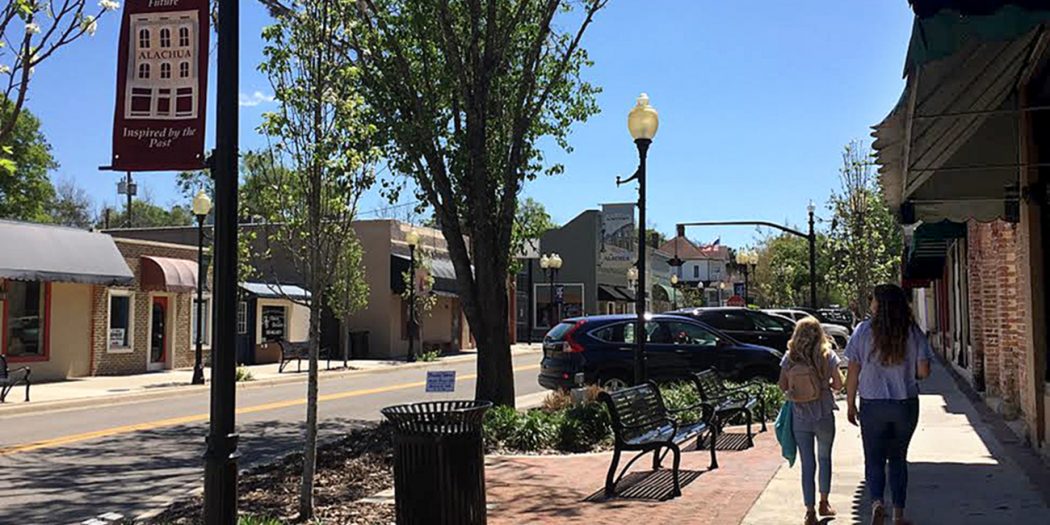 Alachua’s Main Street reflects a small-town character that attracts pedestrian visitors. The lampposts represent the historic aspect of the area.

Main Street Alachua To Be Rebranded As Community Hub

Main Street Alachua is rebranding and the city’s Community Redevelopment Agency Coordinator, Chelsea Bakaitis, said that in five years she wants to see the historic street become a social and community hub.

Part of the rebranding effort has involved her agency’s work on marketing and planning events to bring in people and increase business.

Unlike downtown Micanopy, which is known for its antiques, Alachua has a variety of different shops in its downtown area, such as a music shop, a quilting shop and a flower shop.

After the recession in 2007, Main Street Alachua had to redefine itself as a destination location, Bakaitis said.

In January, Alachua held an Art Walk as one of the first initiatives to get more people to come out. Local businesses found artists from the area that they liked and featured their artwork in the business.

Now, the agency is attempting an event called Third Thursday that has adapted the Art Walk.

Third Thursdays are on Main Street in Alachua and take place the third Thursday of every month. The first Third Thursday was on March 15. The event featured two local bands, art from local artists and businesses teamed up with Swamp Head and First Magnitude breweries for craft beer tastings.

The event, which attracted more than 300 people, Bakaitis estimated, was pedestrian friendly as the city closed Main Street to vehicular traffic.

Advertising for the event was done through WCJB, WUFT-FM, Facebook, fliers and email newsletters, Bakaitis said.

While there was a positive response from the businesses on Main Street, there was also some concern about how effective Third Thursdays will be, she said.

At upcoming events in the Alachua, there will be evaluation forms, so that the city can learn how to make events the best they can be.

“It’s great to spread word of events but there’s also something to learn from the first [Third Thursday] and how to make this work,” said Adam Boukari, assistant city manager. “If there’s something that we can do better we want input.”

City residents and people from the area came out to the first Third Thursday. Christy and Michael Finnell live about 15 minutes north of Alachua and came to listen to music and enjoy the “vibes.”

“They’re trying really hard to make Alachua an approachable, Southern town,” said Christy Finnell. “By the event being on a Thursday, it definitely has a younger feeling.”

Other upcoming events that the agency is planning are the Spring Festival and movies in the park, Bakaitis said.

She said there had been some distrust between many business owners and the city government, but now because of the events business has improved on those particular nights, she said.

Kelly Harris, owner of Kelly’s Kreations Flowers & Gift Baskets and president of Alachua Business League, said that she sees a huge increase in business during the events.

“The events give people the chance to see what a gem Alachua really is,” Harris said.

Along with the events that they are now putting on, the CRA also released a new slew of branding for the city, which includes a logo, an elevator pitch as a part of messaging, and a tagline.

The logo depicts a freeform tree with a lamppost and bending road with Main Street Alachua and the tagline written next to it.

Mayor Gib Coerper said the taglines and the messages that they will be sending out will highlight the historic small town feeling of Main Street Alachua, which was established as a town in 1905, some buildings in the town date back to the 1880s. The tagline states: “Discover the good life.” And messaging will include phrases like “timeless heart of the city” and “small specialty shops.”

Bakaitis said her agency is also working on a Main Street Beautification project, which will include new landscaping and fixing the sidewalks on Main Street.

She said she hopes that one day Main Street will be the first thing that pops into people’s minds when they mention the city of Alachua.

Jessica is a reporter for WUFT News who can be reached by calling 352-392-6397 or emailing news@wuft.org.
Previous March 21, 2018: Afternoon News in 90
Next Denim Designer Empowers Sexual Assault Survivors