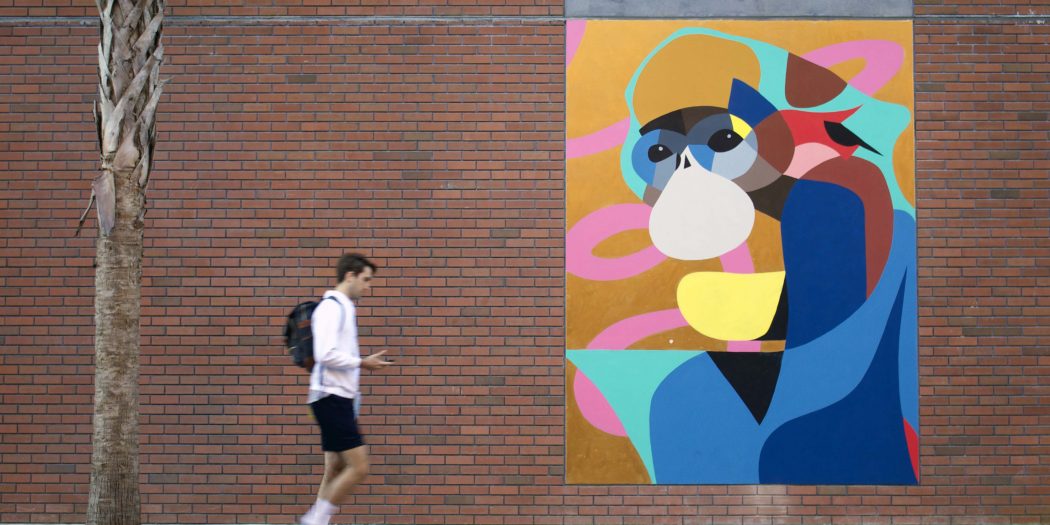 A pedestrian walks past Yonhiki No Saru’s “Four Monkeys” murals on Thursday, March 15, 2018 outside of The Standard apartment complex on Northwest Third Avenue. The murals were added after the Standard encroached public property and a compromise was made with the city. (Max Chesnes/WUFT News).

How Much Does it Cost to Encroach a Public Sidewalk? $75,000 and Some Murals

Almost a year has passed since it was first discovered that The Standard’s parking garage construction exceeded its boundaries, encroaching a public sidewalk.

Now, after deliberation with members of LM Gainesville, LLC, the company responsible for the complex’s construction, city officials say the issue can be put to rest.

City commissioners approved an agreement Thursday that accepts $75,000 from LM Gainesville, LLC and acknowledges the completion of four murals in place of the Standard’s plans for a “living wall” of vines and plant material.

“Rather than have them remove that portion of the building and reconstruct, the city entered into a negotiation with the developer and came to the conclusion that we could work together,” said city spokesman Chip Skinner.

Along with the $75,000 compensation, the murals were a nice compromise between the two parties, Skinner said. The planned living walls would have violated the Americans with Disabilities Act, as they would have extended into the sidewalk and could potentially block pedestrians in wheelchairs.

According to the city’s documentation, artist Yonhiki No Saru, who was inspired by Chinese sculptures, recently completed the murals, titled “Four Monkeys.” The colorful and abstract murals on Northwest 3rd Avenue are to be maintained by the city, according to the agreement.

“There wasn’t enough space for the living wall without encroaching the sidewalk, so a mural is more appropriate than limiting the width of a sidewalk,” Skinner said. “Especially in that area of campus that’s very heavily used pedestrian and cyclist corridor.”

Allison Vizzi, a 20-year-old graphic designer and student at the University of Florida, currently lives at The Standard and said she passes by No Saru’s murals from time to time. The artwork is important because it can engage different people and start a conversation within society, she said.

“As someone who also works with paint, I really can appreciate the scale of the murals and the time it must have taken to complete them,” Vizzi said. “I really like the design of the murals. The imagery is intriguing and the craft is well done.”

While the design is powerful, the murals are in an awkward spot on a small street that is not frequently travelled, Vizzi said.

“They seem hidden to a select few who walk or drive down that small street,” Vizzi said. “If there was no possibility through the city to design the living wall, then I am happy they chose to fill the space with a mural.”

Max is a reporter for WUFT News who can be reached by calling 352-392-6397 or emailing news@wuft.org.
Previous With Threat of Closure Looming, Hawthorne Middle/High Holds Meeting To Discuss Rezoning
Next Faculty Senate Introduces Resolution to Benefit UF’s OPS Workers

At home, Stephanie Karolus doesn’t have Wi-Fi.  Instead, Karolus, 31, would rely on her mobile …