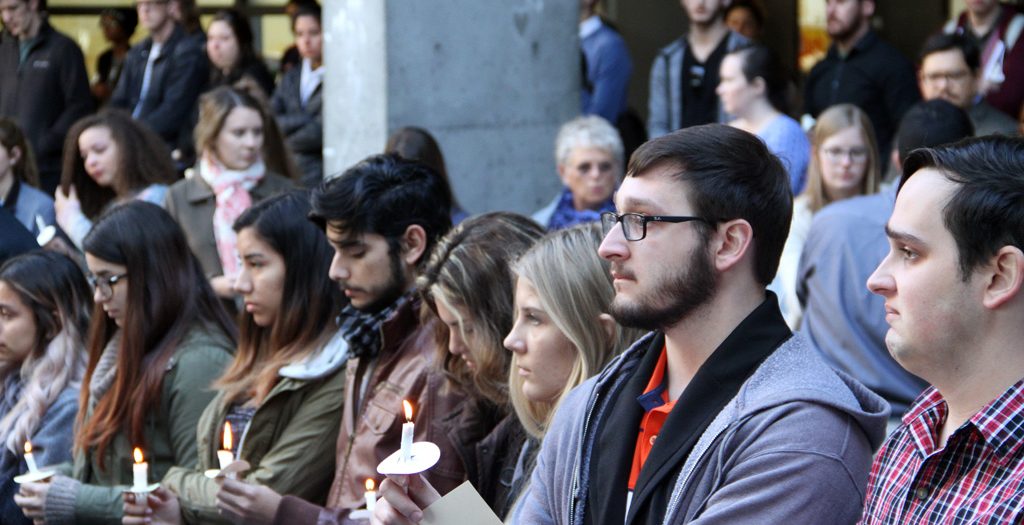 When David Rojas first heard there was an active shooter at his alma mater, he thought it was a joke.

“How could someone make a joke that sick?” he thought, after hearing the news from his friend and former classmate at Marjory Stoneman Douglas High School.

It wasn’t until he turned on the news and saw the freshman building – a building where his favorite teacher still works – that the reality began to sink in, Rojas said.

“I started panicking,” the 21-year-old UF biomedical engineering student said. “I had to leave the room I was in and broke down crying outside.”

A call for change has emerged after 17 students were killed in the Parkland shooting on Feb. 14. And while gun control is at the forefront of the discussion, a second topic has surfaced both nationally and within Alachua County: the need to address mental health resources for high school students.

Rojas, who himself has struggled with mental health issues like anger management, said there needs to be a stronger emphasis on mental health in high school. There is no better time than the present to start giving students direct involvement with counselors, he said.

“It can’t just be the student reaching out to the counselor anymore, it has to be vice versa,” he said. “They are the ones who should seek us out.”

April Griffin, president of the Florida School Boards Association (FSBA) and member of the Alachua County School Board, said her association is asking the state for increased mental health resources for all Florida schools.

“Funding has always been an issue for the past few years,” Griffin said. “Mental health is one of those issues that is very important.”

Executive officers are asking for the legislative committees to take up mental health issues going forward, despite the FSBA only meeting four times a year, Griffin said. The FSBA has not met since the shooting on Feb. 14.

While there is no direct mention of mental health specifically in the FSBA’s 2018 Legislative Platform, Griffin hopes the annual budget will change following the shooting to seek more psychiatrist and guidance counselor positions, she said.

“I think that anything we can do to support our students is what we need to do,” Griffin said. “I hope that the funding comes through, and I’m glad that people are having a conversation about it.”

Rojas hosted a vigil for Douglas alumni at the University of Florida’s Turlington Plaza two days after the shooting to remember the 17 lives that were lost. Mixed in with the crowd were a handful of guidance counselors, he said.

“Nobody asked them to be out there, but they were out there anyway,” Rojas said. “If they can understand that some students might not have the courage to come up to them, then that is definitely a step in the right direction.”

Max is a reporter for WUFT News who can be reached by calling 352-392-6397 or emailing news@wuft.org.
Previous Rock Creek Homeowners Voice Concerns Over Traffic Safety
Next Feb. 22, 2018: Afternoon News In 90

Gainesville and eight other U.S. cities have joined a national initiative called One Nation/One Project that uses the arts to improve community well-being. Each city selects an issue for the focus of the project. The Gainesville City Commission recognized youth gun violence as its local issue. The commission said it has allocated 2% – or $648,172 – of American Rescue Plan Act money to fund the project, which will address youth violence through arts and culture interventions.