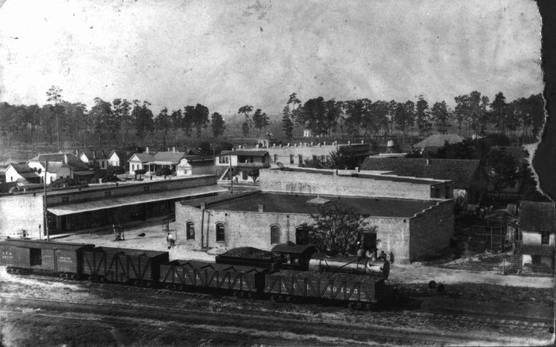 Newberry Lynchings: Should They Be Memorialized?

Alachua County has a dark past.

The county is considering whether to memorialize these atrocities and how to go about it.

Newberry, a town where residents say “everybody knows everybody,” is where the infamous Newberry Six lynchings took place. Newberry neighbors have mixed feelings about the memorials.

Some Newberry residents believe the past should stay in the past and do not want geographic markers of the lynchings in their town.

Robert Smith, who has lived in Newberry for 22 years, said the memorials would “signify hate.”

“Y’all try to put up shrines everywhere for everybody,” Smith said. “Why don’t we just move on?”

Smith feels the Confederate monuments should be left alone or put back if they were removed.

“Everybody tries to make race things an issue and I don’t understand why,” Smith said. “We all come from the same God. We all got the same blood.”

Smith likes Newberry because it’s a small town, and doesn’t think there is racial tension.

“But I feel that there can be racial tension if y’all keep on digging and trying to find stuff from the past,” he said.

Freddie Warmack, now 85, became the first black mayor of Newberry in 1984. He said that while he would support a memorial for the whole county – he thinks that markers at each location might bring up negative memories.

Warmack has lived in Newberry his whole life and won 60 percent of the white vote when he ran for office.

“I think if you’re going to educate somebody on the history then, it’s some bad stuff that went on that don’t need to be revised,” Warmack said. “Because right now we’re trying to get beyond that.”

According to Warmack, the hanging tree used to be at the intersection of Newberry Lane and 235, but it was taken out to pave the road.

Over his lifetime, Warmack said that race relations in Newberry have improved.

“Back during the Jim Crow time it was worse,” Warmack said. “Since those times, things just fell into place, so to speak.”

Judy Hasan Lewis, Warmack’s 64-year-old daughter, sees things differently. She was born and raised in Newberry and heard about what happened in the community from older people.

“One of the young men lived across the street from me, where I live, and he told the story of how he survived by hiding behind one of the stilts that held the house up, and he was a little boy at the time when he saw the lynchings and stuff,” Hasan Lewis said.

She supports memorializing the lynchings and thinks it might be best to have several different memorials for the different communities throughout Alachua County.

“It’s clear to me that there’s a division in the color line,” Hasan Lewis said. “For instance, our city commission; we don’t have any representation on the commission from the black side of the community, nor any other ethnic group.”

Hasan Lewis said integrating the schools was a struggle, but things have improved.

“The kids, they don’t participate in all that racial stuff because they have come up together, and it’s not such a barrier like it was when I was coming through,” Hasan Lewis said.

The Alachua County Historical Commission, which created the current list of confirmed lynchings, is currently preparing a more thorough list of the lynchings and its recommendations for a way to memorialize them. However, the county commission hasn’t yet decided how that will happen, either through one central memorial or markers near every known location. Some communities, like Newberry, may have a more complicated relationship to the lynching memorials.

Alachua County Commissioner Robert Hutchinson suggested something to memorialize “the geography of the lynchings,” such as a marker on the closest right of way with an iconic historic marker shape to denote that a lynching happened there.

He also suggested a memorial for all of the lynching victims in Alachua County in Gainesville, on the Public Defender’s building because the extrajudicial killings denied people due process.

Newberry Mayor Jordan Marlowe said that he is open to having a conversation about a memorial or memorials with his constituents and with the county. Marlowe said that only one commissioner expressed support for having markers at or near each lynching site.

“The county has to make the decision for what it feels is right for its citizens,” Marlowe said. “I certainly wouldn’t object if the county felt that was what it’s reflection from its constituency wanted.”

Marlowe said that he spoke with county commissioners, who told him they would not force the cities to do anything.

Patricia Hilliard-Nunn has studied what’s widely known as the Newberry Six lynching since 2000. She calls it the “1916 lynching in Newberry” because as many as nine people may have been lynched or shot to death.

The Newberry Six lynching refers to the killing of at least six people (four African American men and two African American women) that, as was thought at the time, helped Boisy Long, accused of hog stealing and shooting two people, escape.

Even in 2017, there’s still more information that is being uncovered about African American history in Alachua County.

“There’s this issue of trauma,” Hilliard-Nunn said. “You had the people who were lynched, and certainly there’s trauma faced by the survivors of the lynching, who for years had to live among those individuals who participated in the lynching and their family members.”

Hilliard-Nunn is working on a documentary about the history of African Americans in Alachua County, and many people would mention the Newberry lynching in her interviews.

She spoke at a recent Alachua County Historical Commission meeting, where she supported the creation of a memorial, but also raised concerns about the security because of how the Rosewood and Emmett Till markers, which memorialized racial violence, have been vandalized.

While she agrees that people shouldn’t live in the past, she said that it’s important to not forget it.

“There’s been silence, but there hasn’t been healing,” Hilliard-Nunn said.

Nicole is a reporter for WUFT News and can be contacted by calling 561-543-8861 or emailing ndan@ufl.edu.
@nicolekdan
Previous Commissioner Hopes Decades-Long Plan Will Take Gainesville To Zero Waste
Next Alachua County Jail Making Strides On Mental Health But Still Encountering Struggles