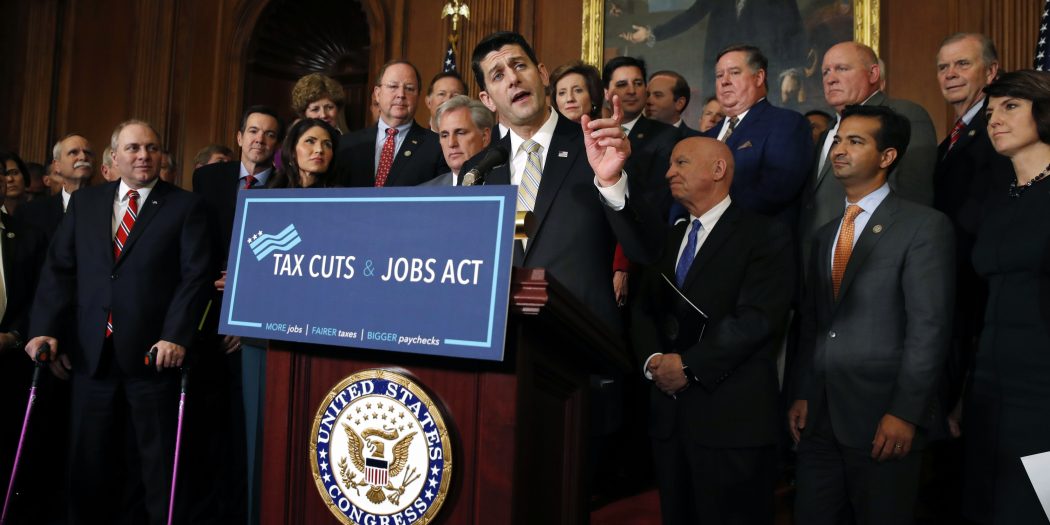 When Galen Cobb got accepted to the University of Florida Graduate School last year,  she knew living on a graduate student budget wouldn’t be easy, but she saw it as a small price to pay to pursue her dreams.

The 25-year-old is in her first year of her biology doctoral program.  She said she’s worked the hardest she’s ever worked in her life — spending at least 60 hours a week teaching an undergraduate genetics course, taking her own graduate courses and working on genetics and ecology research — in exchange for a tuition waiver and stipend to cover most of her living expenses.

But plans proposed by the Tax Cuts and Jobs Act, a bill passed by Republicans in the U.S. House of Representatives on Thursday could change all of that for Cobb, who hopes to use her degree to teach and conduct research in evolutionary genetics.

The House Tax Cuts and Jobs Act proposes a more than $1 trillion tax cut that would mainly benefit corporations and Americans in the highest tax brackets. According to a breakdown from NPR , the initial House tax proposal would lower the corporate tax rate from 35 to 20 percent. Americans in the middle-to-higher tax brackets would see the most tax cuts for the tax year 2019, but low-income households would have little change in their tax bills. By 2027, 1 in 5 Americans in the $40K to $50K income bracket would see a tax increase.

In order to cover the costs of the tax cuts under the GOP proposal, U.S. graduate students would take a hit by having the cost of their tuition waiver treated as taxable income — without any change in their actual income.

This poses a major threat for grad students who are able to pursue higher education thanks to assistantships and fellowships that cover tuition costs.

“This is an investment in my future, and that’s how I see graduate school. And part of investing might be taking a little bit of a risk — but it shouldn’t be made impossible, and I think that’s the fear a lot of us have when we see this new bill,” Cobb said.

“If you talk to any of the students here, we’re not looking to make it rich in grad school, but we want to be able to pay our rent and buy dinner every night,” she said. “My stipend pretty much covers my cost of living, and maybe gives me more opportunity to save for things like emergencies, but to cut down on that would just be unliveable. If it were implemented as it’s been perceived, I think for the majority of graduate students, it would be unattainable.”

A loss for the academic community

Graduate students are instrumental in teaching undergraduate classes and lab sections, especially for large academic departments like psychology and sciences, which have too many undergraduate sections for professors to handle, said Paul Duncan, the Senior Associate Dean of the UF Graduate School.

If UF were to see a loss of graduate students, the entire landscape of the university would change, Duncan said, describing the House Tax Cuts and Jobs Act as a “disaster for graduate assistants.”

The average graduate assistant at UF typically takes nine credit hours of classes in the fall and nine in the spring. According to calculations by the UF Office for Student Financial Affairs, the in-state tuition value for a graduate student, if waived, is about $12,740. Grad assistants also typically receive a stipend of around $12,000. If the House bill is signed into law in its current form, grad students would be taxed on yearly income of $24,740 ($12,740 from the tuition waiver + $12,000 from the stipend).

If the GOP House legislation were implemented:

“It sounds to me like the intent is to create revenue to offset some of the cuts, but why it’s being focused on a particularly low-paid group of graduate students is beyond me,” Duncan said. “I have not yet heard or seen anyone or any group making the case for why this would be a good idea.”

As Republicans scramble to agree upon tax reform before the turn of the year, the U.S. Senate has also proposed a tax reform bill, and according to a report released Thursday by the Joint Committee on Taxation, Americans in higher income brackets would still see the biggest tax cuts compared with those in lower income brackets.

Unlike the House’s proposed tax bill, though, the Senate plan would not impose taxes on tuition waivers. But the Senate still has to pass this legislation and is set to reconvene the week of Nov. 27, after the Thanksgiving recess, to vote on their version of the tax bill.

University of Florida President Kent Fuchs also expressed his concerns during a UF Faculty Senate meeting on Friday following the passage of the House legislation and wrote in a statement that the Senate bill provides more hope for grad students.

“While I certainly understand the need for tax reform, we are very concerned about the negative side effects of the House Tax Cuts and Jobs Act on our graduate students, who would suffer an undue burden,” Fuchs wrote in an email. “We are more hopeful for the Senate plan, which would retain important higher education student tuition remission, the student loan interest deduction, and employer-provided educational assistance.”

Students fear for the future

Galen Cobb said she is not only worried about what the House bill could do to her career path; she worries that it will decrease diversity in the academic community.

“I think most people at the Ph.D. level will tell you that what draws us to a school is the work we will be doing and the people we will be working with,” she said. “Part of the benefit of coming to grad school is being part of a really challenging and diverse environment, and if I were to see a loss of diversity because of people not being able to afford pursuing their degrees here, it would be a real shame.”

Like Cobb, Megan Opincarne is a UF graduate assistant who fears the House tax legislation could hurt her academic career. Opincarne is in her second year of her master’s program in the School of Natural Resources and Environment, where she’s researching ecotoxicology and is on track to obtain an interdisciplinary ecology degree.

The 29-year-old has her tuition waived in exchange for teaching three sections of an undergraduate biology lab and also maintains a part-time job as a contractor for Microsoft, a job she started in March before beginning her master’s.

“I wanted to see if I could maintain both and not be completely broke for two years,” she said. “I have bills to pay, and my graduate assistant stipend wouldn’t be enough.”

But she said having her tuition waived as a teaching assistant and maintaining her position with Microsoft means that her gross income is between tax brackets, and if the House bill were to be implemented, her taxes would nearly double — while her actual income would stay the same.

“Should the bill pass, and my tuition expenses become part of my taxable income, this increase will cause me jump into the next tax bracket, doubling my tax burden, as well as adding $10,000 to my income, without changing my take-home,” the 29-year-old said.

“Working full time as a full-time grad student is hard enough,” she said. “And I can’t see how the GOP plans to solve our budgetary problems by taxing my education.”

Darcy Schild is a University of Florida journalism student and reporter for WUFT News. She can be reached at darcyschild@gmail.com or at 419-239-9411.
@darcyschild
Previous Once Bustling Seat Of Alachua County, Ghost Town Of Newnansville Attracts 19th-Century History Lovers
Next In Photos: The Ocala Jockey Club Hosts Three-Day Equestrian Triathlon