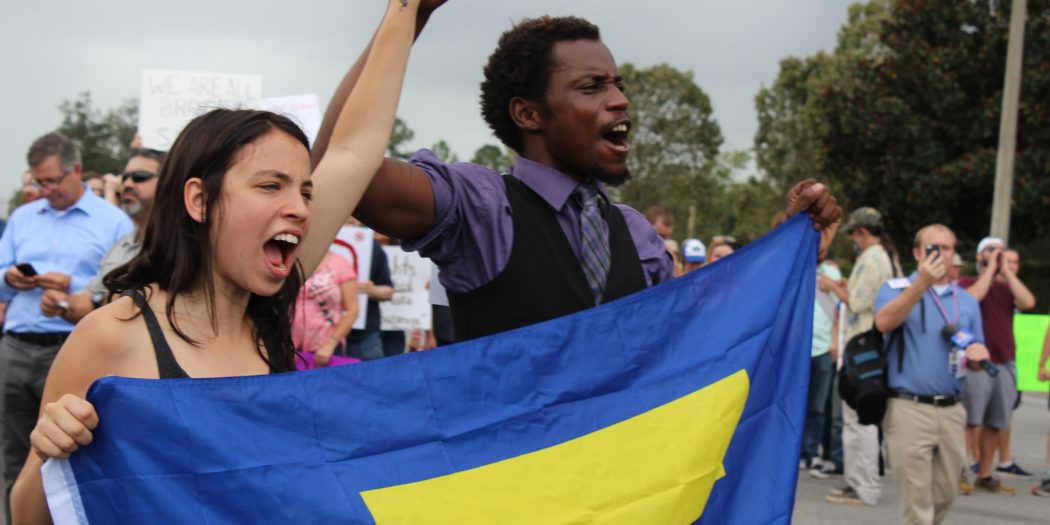 The sense of unity and togetherness was unparalleled as the protesters circled around the intersection of SW 34th St. and Hull Road, just outside the venue Richard Spencer spoke in. (Christy Piña/WUFT News)

White nationalist Richard Spencer’s speech Thursday at the University of Florida prompted a state of emergency, carried a $600,000 tab and drew more than 2,500 demonstrators.

But law enforcement summarized the contentious event, which devolved into an antagonistic affair, as “a mostly peaceful day.”

“Despite our worst fears of violence, the University of Florida and the Gainesville community showed the world that love wins,” Fuchs said in a release.

In an op-ed penned for the school newspaper, The Alligator, shortly before midnight, Fuchs wrote that “racist” Spencer “failed miserably” to disrupt the campus, inundated by journalists on Thursday.

The university, which initially rejected Spencer’s request to speak, spent an estimated $600,000 to enhance security that resulted in five “minor” injuries — each treated on the scene — and two arrests.

Sean Brijmohan, 28, of Orlando, was charged with possession of a firearm on school property. According to a tweet from the sheriff’s office, Brijmohan was working as a security guard for a media outlet.

David Notte, 34, of Gainesville, was charged with resisting an officer without violence.

A total of 44 federal, state and local agencies from one end of the state to the other — including the Miami-Dade Police Department, the Jacksonville Sheriff’s Office, and the Okaloosa Sheriff’s Office — participated in the joint effort.

The law enforcement troops kept those who didn’t get inside the venue where Spencer spoke corralled on a barricaded street where uniformed officers stood watch on the road, on roofs, in nearby woods, in helicopters and through drones.

The Florida Department of Law Enforcement, Florida Fish & Wildlife Conservation Commission and the Federal Bureau of Investigation also participated in the effort.

“The greatest #BREAKING news is that ZERO Law Enforcement were injured during this event,” the Alachua County Sheriff’s Office tweeted Thursday night.

Scott late Thursday tweeted a thanks to “our law enforcement from across the state who worked hard in Gainesville today.”

Inside the Phillips Center, Spencer and his supporters tried to belittle several hundred members of a diverse and raucous audience that repeatedly drowned out his message by shouting and through chants that included “Nazis are not welcome here,” “go home Spencer” and “black lives matter.”

The crowd also blamed Spencer for a death at a “Unite the Right” rally in Charlottesville in August, when Heather Heyer was killed after a car plowed into a crowd of counter-protestors. Dozens of others were injured.

David Parrott, UF vice president of student affairs, tweeted he was “Very proud of our students for using their voices and rallying together in support of one.”

But Spencer mocked his critics, many of them students, accusing them of acting like “childlike Antifa” — anti-fascists — and calling them “a bunch of screeching and grunting morons.”

One of Spencer’s supporters painted the overwhelmingly negative response as a boon for the white nationalist movement.

Mike “Enoch” Peinovich, host of The Right Stuff podcast, told the crowd that their chants and actions “is the best recruiting tool you can ever give us.”

The News Service of Florida is a wire service to which WUFT News subscribes.
Previous Oct. 19, 2017: Afternoon News In 90
Next Gainesville Police Arrest Three In Shooting Following Alt-right Speech 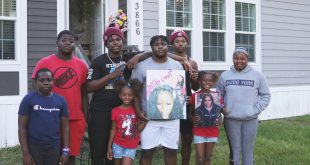 The Family Backbone: Friends And Family Reflect One Year Later On The Life Of Natisha Covert