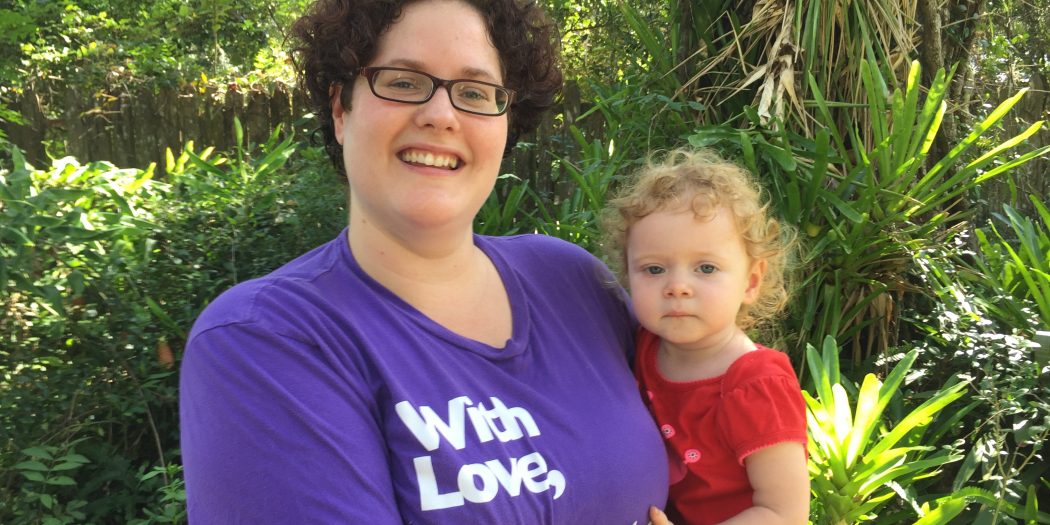 Baby Gator Daycare Price Out Of Reach For Some Student-Parents

Editor’s note:This story has been updated to provide more context and correct an earlier version that misattributed information from Baby Gator’s request for financial support to UF’s Student Government to Stacy Ellis, the director for Baby Gator.  It also corrects the spelling of Ethel Rocha’s name and Baby Gator’s National Association for the Education of Young Children accreditation status, which is current.

Akiya Parks started her freshman year at the University of Florida in 2015, and one week
later she discovered she was pregnant.

Parks continued through college during and after her pregnancy. When her son, Caleb, turned 1, she wanted to enroll him in UF’s Baby Gator Child Development and Research Center, which has three on-campus locations and offers care to children as young as 6 weeks old.

But the tuition price was too expensive for her, the long waiting list would delay enrollment by more than a year, and she would have to pay to be on the list.

“It was a disappointment,” Parks said of not being able to enroll him in Baby Gator. “It
just makes sense to live on campus and go to a daycare on campus, so I wouldn’t have to
drive and I could save gas.”

Parks has scholarships, money from her job at Student Maid and financial aid from a Pell Grant, which she uses for her son Caleb’s daycare at Cuddly Kids Academy.

“It was frustrating because you want to put your child in a good daycare, but to get him in [Baby Gator], it’s like rocket science,” said Parks, now a 21-year- old junior at the university studying family, youth and community sciences.

Parks’ struggles with Baby Gator’s pricing and waiting list are echoed by other UF student-parents.

“I did not [choose Baby Gator] for a few reasons,” said Brittany Hensley, 32, who graduated from UF with a Ph.D. in audiology in 2013 and who cares for her 4-year- old daughter, Ellie, with her husband.

“One [was] that, at the time, there were only full-time options, and they were outside of our budget,” she said. “We needed something part-time and fitting a two-student family.”

As parents are pointing out such obstacles, Baby Gator is seeing a decline in enrollment of children of student-parents, dropping to 52 in 2016 from 75 in 2012 for the Lake Alice location, which has capacity for 156 children.

Baby Gator was started in 1969 by a group of student-parents. Baby Gator has since become an auxiliary of the university, meaning it does not receive funding directly from UF. Eighty percent of Baby Gator is paid for by payments from parents and about 7 percent is paid for by the Capital Improvement Trust Fund fees paid by university students.

That fee, which goes toward upkeep and maintenance of buildings around campus, is $6.76 per credit, regardless if a student is taking undergraduate or graduate courses, according to the UF Finance and Accounting website.

However, Baby Gator only receives 22.5 cents per student per credit hour taken each semester, according to the Educational Research Centers for Child Development regulations.

According to Stacy Ellis, the Baby Gator director, these funds are not sufficient and UF student fees would have to be increased to further discount the cost of Baby Gator tuition for student-parents.

One is for students and some others: undergraduates, graduate students, interns, post-docs, residents and fellows. The second is for faculty and Gainesville residents. The first group is given preference for enrollment over the latter.

At Baby Gator’s Lake Alice location, the student price for child care for children ages 6 weeks to 11 months is $208 a week; tuition for 1-year to 23-months-old children is $192 per week; and parents of 2-years-old children pay $170 a week.

The Newell Drive location charges a weekly rate of $220 for children ages 6 weeks to 11 months; $210 a week for 1-year to 23-months- old children; and $190 a week for 2-year-olds. The cost at the Newell center differs from the Lake Alice location because it is a smaller location and costs more to operate, Ellis said.

Children 3 to 5 years old attend Baby Gator at either the Diamond Village or Lake Alice location. Tuition for that age group at those locations costs $145 per week, or more than $5,000 for nine months.

For comparison, student-parents pay the University of Central Florida’s Creative School for Children a maximum of $184 a week for their infants, according to its website. UCF does not receive any subsidies from the university and runs its operations from the same fees from university tuition dollars and parent-paid tuition to the center, according to the Director, Kim Nassoiy.

But when compared to Baby Gator, UCF’s center only has 140 children and four paid teachers.

At Florida State University’s Childcare and Early Learning Program, student-parents pay $200 a week for infants, according to its website.

According to Director Tiffany Karnisky, FSU receives some funding from its student government, but the amount received varies depending on the student government budget. Additionally, FSU’s two centers can care for up to 96 children and has about 34 paid employees.

University of Florida, University of Central Florida and Florida State University are all accredited by National Association for the Education of Young Children.

Meanwhile, at Cuddly Kids Academy in Gainesville, where Parks sends her son, parents pay weekly rates of: $168 for children 6 weeks to 12 months; $150 for 12 months to 24 months; $127 for 2-year- olds; and $115 for 3- to 5-year- olds. The daycare is a member of the Florida Coalition of Christian Private Schools Association, “an accreditation agency for faith-based child care facilities,” according to its website.

Cuddly Kids’ annual enrollment fee is $35, and the annual materials fee is $50 — or $85
in total fees a year. Three meals a day are also provided, just like at Baby Gator.

Another Gainesville daycare, Small World Daycare and Learning Center, which is accredited by Florida Association for Child Care Management, costs $175 a week for infants, $160 for toddlers, and $140 for 2-year- olds. Included in the price is three meals a day.

The difference in the student price, which is discounted, and faculty price at Baby Gator
vary by the child’s age, but it can be as much as $80 a week.

The two-tier tuition system also creates an income gap for Baby Gator, Ellis said. Because 50 percent of the population pays less than what child care costs, which includes paying for staff and providing breakfast, snacks and lunch for all children, tuition alone does not cover the whole gap.

Baby Gator works to pay this gap through in-house funding, special programming and
money earned from large fundraisers, she said.

The annual salary budget for administrators, teachers and substitutes for Baby Gator is $3,042,832, according to Ethel Rocha, the Baby Gator admissions registration coordinator.
The food budget is an additional $170, 000.

The overall budget for Baby Gator, including rent, supplies and salaries, is a little more than $4 million, Ellis said.

The three Baby Gator centers combined have space for 332 children. But the organization has a long waiting list because it stays fully-enrolled all year, and “the need for child care on campus is greater than what [Baby Gator] can accommodate,” Ellis wrote in an email.

Baby Gator has 79 full-time paid employees and between 150 and 200 part-time employees.

In addition to the waiting-list fee, the organization charges a one-time $250 registration fee for “the processing of a child’s enrollment, annual transitions, and withdrawal,” Ellis wrote in an email.

Ellis said that Baby Gator hopes to make more connections with different departments so those departments can provide subsidies for spots for children of student-parents.

For example, the College of Public Health and Health Professions reserves six spaces for its students and faculty between the Diamond Village and Newell locations.

“We would love to see more of those kinds of partnerships,” Ellis said. “We recognize it’s the only way [student-parents] can afford to come to us.”

According to a 2016 report by Child Care Aware of America, infant care for a married family in Florida consumes 10.4 to 11.9 percent of a family’s income. If that family has two children, those percentages nearly double.

Another problem faced by student-parents, especially graduate students, is the limited subsidies provided by the Early Learning Coalition, said Geraldine Klarenberg, a Ph.D. student in agricultural and biological engineering at UF.

Klarenberg, a single mother, said that even after her ELC subsidy, she had to pay about half of her income to Baby Gator, which cared for her daughter when she was 4.
And then came other expenses.

“Rent was 50 to 60 percent of my paycheck,” she wrote in a Facebook message. “Can you imagine supporting a family on that?”

Still, Klarenberg, who served on Baby Gator’s board as a student-parent representative during the 2014-15 school year, said she could offer “nothing but good things” about the teachers and quality of Baby Gator.

“They’re great people, they do great lesson plans, and they have a great teacher-child ratio,” she said.

While on the board, Klarenberg said she and the other board members discussed how to lessen the burden for student-parents — especially on how to solve the problem of keeping teachers without raising prices for parents.

“For people on the outside, there’s a lot of complaining going on, but from the inside, [Baby Gator] struggles with it,” she said.

Thirty-five- year-old mother and student Rebecca Pethes called the cost of Baby Gator “astronomical” and said the availability of childcare on campus was a “rude awakening.”

Pethes, who is in the second year of the counselor education master’s program, tries to take out the smallest amount of student loans possible and stretches every dollar she gets from her two jobs.

She said she has considered dropping out several times and this is the most stressful time of her life.

But she hasn’t given up. All she wants is to have a better job and a better life for her daughter.

“Sometimes I just feel trapped,” Pethes said. “Should I continue and face all these challenges and rack up student loan debt? Is it going to be worth it? It’s insanely hard.”

Jayna is a fourth year journalism student at the University of Florida and can be reached at jayna.ts@ufl.edu with any questions.
Previous Oct. 2, 2017: Afternoon News in 90
Next Oct. 3, 2017: Morning News In 90