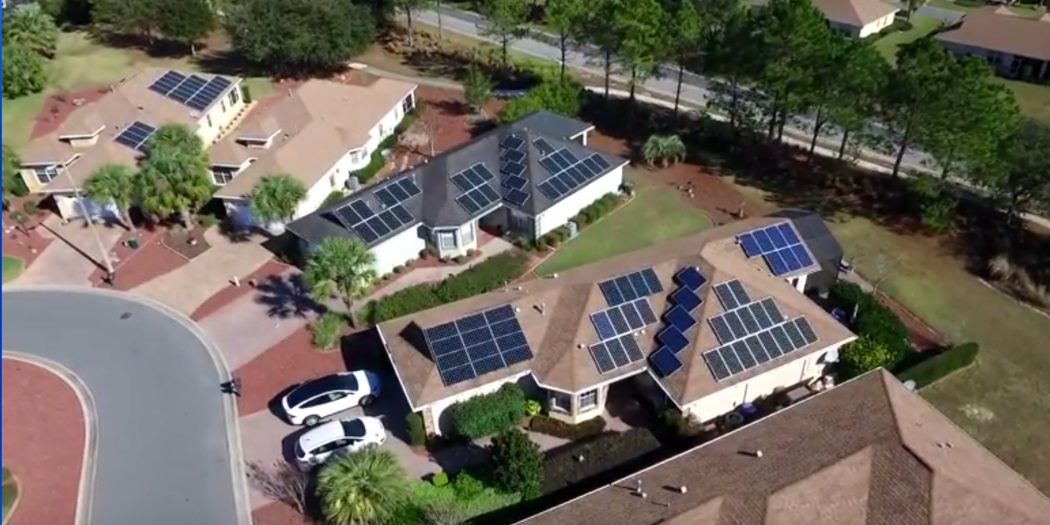 David Shira and two of his neighbors in Ocala invested in rooftop solar systems. (Courtesy of David Shira)

What Incentives Are Available To Families Who Want To Install Solar Panels?

By Anthony Vella and Alexis Pastore

This story is part of Untold Florida, a WUFT News series built from your questions. Fran Siegfried, an audience member, asked us, “If a family wants to get rooftop solar, what are the financial incentives from Florida, the federal government, or the power company?”

With the rise of alternate energy sources, those looking to go solar may have a number of incentives to make the switch.

David Shira, founder of the Sunshine Solar Group, explains his perspective on the choice to add panels on a home’s rooftop.

“You can let God make your power for you every day, or you can let the utility make it and charge you for it,” he said.

For homeowners looking to buy into solar, a number of different factors will determine the price, such as the company, size of the system, the amount of energy used and what appliances the system will power.

“If I sit down with someone with what I call a full proposal, which is anywhere from 15 to 20 pages depending on a client’s situation, and when I go through it, when I’m done, they will understand solar,” said Shira. “They will understand that they can generate most of or all of their electricity from their own roof…. and most times if it’s within their budget, they will go solar.”

Initial prices of solar panels are determined by how many kilowatts they can produce, with systems ranging between $15,000 and $35,000. There are several incentives in place, including solar co-operatives that can provide up to 50 percent discounts on systems.

According to information provided by Liberty Tax Service, a homeowner can use the Residential Energy Credit to deduct up to 30 percent of the installation cost from your federal taxes. This credit, however, is expected to decrease in the next few years, and will eventually end by the year 2021.

According to Alex Khokhlov, co-founder of Power Production Management solar firm, finance companies are willing to offer no interest or payments on that 30 percent when choosing to finance a solar system: “So essentially you have a reduction in the cost of entry.”

When asked about the discontinuation of the Residential Energy Credit, Khokhlov believes that tax incentives have performed their purpose.

“When they were first implemented and then amplified under the 2008 Reinvestment and Recovery Act, what we saw was that solar panel prices came down four times — I mean it has reduced by 75 percent,” said Khokhlov. “With that much of a price reduction, that 30 percent incentive will not be required for the industry to move forward.”

Khokhlov also said there are other incentives beyond bill offsets and tax credits. “Oftentimes it’s the sunniest roof, so it shades the house, reduces the heat gain. It adds property value without raising property tax, so you could have equity in your home or add equity to your home without having to pay for it.”

The demand for solar has risen to the point where even cities have enacted bills and ordinances to make solar energy a requirement. The city of South Miami recently passed an ordinance requiring new homes or renovations beyond 75 percent of the home to include solar panels on the roof of the building.

Mayor of South Miami Philip Stoddard said he and several other mayors were disheartened when President Donald Trump announced the United States was pulling out of the Paris Agreement, and they have been looking at ways to keep their cities carbon neutral.

“When a new house is constructed, the developer typically cuts down or removes all the existing trees, and our codes requires them to plant new trees back. However, it takes a number of years before the carbon capture from those new trees catches up to what was there beforehand,” he said. “Solar is a good way of jumpstarting the carbon capture process.”

In Gainesville, Mayor Lauren Poe said that there has been no discussion of requiring similar solar investment from home builders because existing incentive programs such as the Alachua County Solar Coop as well as the Property Assessed Clean Energy Program.

“We have asked our staff to bring back some information for us on whether we are in compliance with the Paris Agreement and if not, what would be the necessary steps to achieve that,” he said.

Stoddard still believes that solar energy is a worthy investment: “If you have a sunny roof, and you don’t have solar, you’re leaving money on the table. The installers are paying more for workman’s comp than they are for the solar panels.”

Are you curious about something in your community? Let us know, and we’ll report the answer as part of our Untold Florida series.

Anthony is a reporter for WUFT News and can be contacted by calling 352-392-6397 or emailing news@wuft.org.
Previous Beyond Licenses For Underage Couples, A Look At Other Marriage Questions in Florida
Next Live Map — Total Solar Eclipse Crosses The U.S.