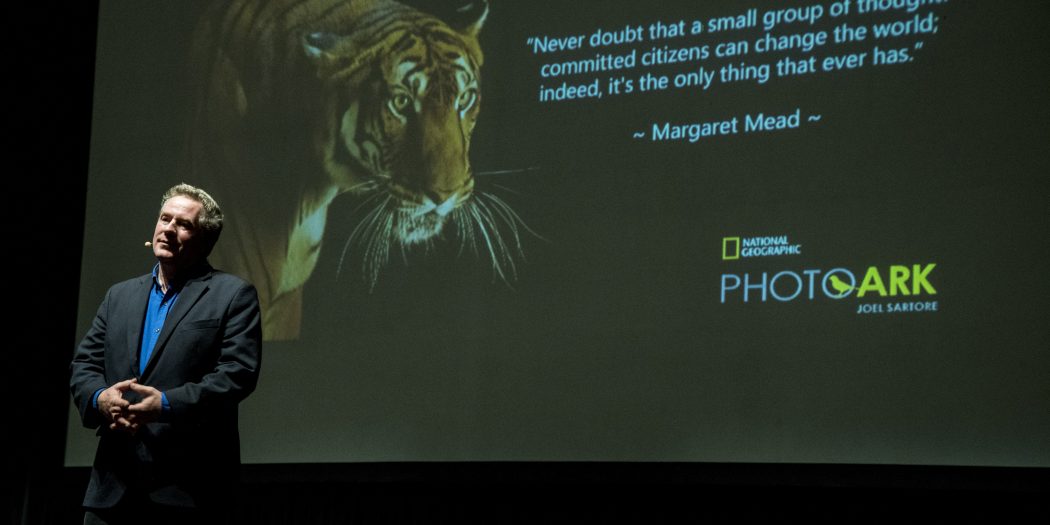 National Geographic photographer Joel Sartore is the founder of Photo Ark, an effort to take portraits of every species on Earth living in the world’s zoos and other protected areas, to inspire people to save these animals before they are extinct. On a visit to UF’s Florida Museum of Natural History to photograph insects and celebrate the museum’s 100th anniversary, Sartore sat down with UF environmental journalist in residence Cynthia Barnett and conservation photographers Jennifer Adler and Ryan Jones. Here’s an edited version of their talk about how to inspire people to care about imperiled species.

Q: What have you learned about what audiences like to see in animal photos, based on your Instagram posts that are seen by some 70 million people?

Well we know that the site is a party for some because when you post to say that the very last Rabb’s Tree Frog has died and the species is extinct, some of them say hey, how many of those would it have taken to make a meal? But most people really care and they want to learn more about the world around them. Most people care deeply, and that’s very encouraging.

What works best on Instagram are pictures of animals that look like us. Funny expressions are good – lemurs, or a turtle that looks like it’s smiling, or something with giant eyes or an animal that can stand on two legs like a Meerkat or a bear.

If it’s a picture of a pelican, better its beak open because it’s surprising. People want surprise. They’re experiencing the world through the web now more and more because they’re on a computer all day in an office; we’re an information society. So yeah, they want things that they can share with others, that are surprising and worth their time.

Q: What do people not want to see?

Insects in general don’t do very well. Aquatic invertebrates don’t do that well unless you have some really cool story with it.

Q: So how can we help people see the value in those smaller creatures, in the mollusks and the mice?

I think we have to educate people as to why, say, a mussel, is so valuable, and help them fall in love with a mussel. I had great teachers like Steve Austin, a malacologist out of Tennessee. He taught me why freshwater mussels are so important. That’s his life’s work, and I can share that. I’ve got another guy who’s into grouse who taught me about those. And so I’m a huge fan. I met a guy who is crazy about crawfish – one of the nation’s leading crawfish experts, and so I’m into crawfish. There’s a lady in Florida who’s really into endangered beach mice – every endangered beach mouse subspecies you can get.

If you are taught how wondrous each of these animals is, you won’t be able to say no. You can’t help it. Most people have never thought of a mouse other than something that scares them when they turn on the kitchen light.

Q: You’ve said it’s important to give people specific ways to help these species. How do you do that?

Well for example, with monarchs, we tell people about the need to plant milkweed and we send them to saveourmonarchs.org. Everywhere I go, I ask the scientists we work with to say: Here’s what’s needed. I used to think it was enough to get people to fall in love with something. But it’s too easy to hit “like” and move on. Now, I want to give people specific actions. I’ve been doing this for a long time and people want to help, but they don’t know what to do.

Q: How do you deal with the tension between the need for conservation, and the need for people in some parts of the world to eat or sell these animals for their livelihood?

Things have to have value. If it pays, it stays. You have to establish a value, like something that tourists would come see, or a wildlife preserve that could be established. And that’s really difficult when pangolins are seen as something you can use in traditional medicine or as food, to tell people not to consume them because somebody on the other side of the world says so. So if you can figure out a way to get people coming to visit and pay to see them or pay to stay in your village to see them, that’s a way. I just don’t know how anything is going to make it if it’s not worth money, going forward. We’re on our way to 10 or 11 billion people, and when it pays, it stays.

I called it the “Biodiversity Project” during the first four or five years. Then one day, I couldn’t remember the name during an interview. So I changed it. I hesitated with ark because I didn’t want it to be a religious thing. But then I thought, “hell, I want everybody on board.” People know what ark means. And I would think that this is inclusive – that everybody likes animals. That everybody likes seeing birds singing in trees and butterflies flitting around. You’d have to be a pretty dark person if you didn’t appreciate a monarch butterfly landing on a flower or seeing geese fly high in the sky talking to each other as they try to race out ahead of time. I’d like to think that everybody, no matter what they think politically, cares about what happens to nature.

Q: When you began the Photo Ark, what was behind the decision to photograph these animals in captivity, rather than in the wild?

I’m not saying that this is going to make the planet infinitely better. But at least we have a record of what we’re squandering. And some species, we will save.