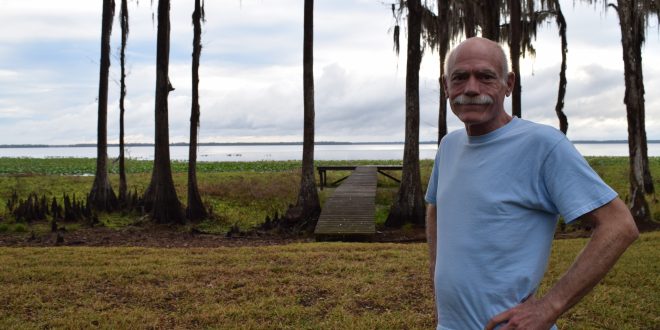 Marc Wilson stands on his Lochaloosa Lake property, which has had vegetation crowding the shoreline that he believes the Florida Fish and Wildlife Conservation Commission should remove. (Kelly Hatton/WUFT News)

Updated: April 25, 2017, 5:14 p.m.When Marc Wilson bought his home in 2000, he believed his lakefront property would continue to look pristine as long as he took care of it.

The lake he looks at now, though, is covered in algae blooms and other vegetation.

Following a drought in 2012, Lochloosa Lake in southeast Alachua County between Hawthorne and Micanopy hit abnormally low water levels. Wilson noticed vegetation sprouting up behind his home on the eastern shoreline.

Plants, however, wasn’t all he saw.

One evening, Wilson caught an alligator lingering under his neighbor’s dock in the vegetation. The alligator wasn’t afraid of humans, he said, and it wasn’t until his neighbor stomped loudly on the dock that the reptile swam away.

“I don’t even go out to the dock anymore,” Wilson said. “You can’t outrun a gator.”

When he retired in March 2016, Wilson began contacting agencies to find out who was responsible for the vegetation.

The Florida Fish and Wildlife Conservation Commission’s response was that Wilson would need to pay for the vegetation removal himself. He said he was told to file for a permit available to property owners to allow them to control part of the shoreline.

“Working with stakeholders is our top priority here at the FWC,” said Susan Smith, director of the commission’s Community Relations Office.

But for Wilson, that wasn’t enough. As the owner of two Chihuahuas, he feared for their safety. Additionally, he said his property value dropped by $40,000.

The commission “should have arranged for someone to come in and mow the vegetation down,” Wilson said.

The Florida Aquatic Weed Control Act states, “The Fish and Wildlife Conservation Commission shall direct the control, eradication, and regulation of noxious aquatic weeds … so as to protect human health, safety, and recreation and … prevent injury to plant and animal life and property.”

Based on that statute, Wilson believes the commission isn’t fulfilling its duties.

But Smith said the commission is trying to do its best with the situation.

“We are here to work with the public to help ensure public safety and conservation of our fish, wildlife and their habitats,” she said.

The vegetation, if non-native, could cause problems with fish and recreation, said Lyn Gettys, an assistant professor of aquatic and wetland plant science at the University of Florida’s Fort Lauderdale Research and Education Center.

“There may be less fish,” she said. “If the water is used for swimming, people could drown.”

The commission maintains that the vegetation in the part of the lake in question is mainly native. But Wilson said he has never been informed about what species of plants naturally lie along his shoreline.

Wilson has contacted other officials in Florida to help resolve the problem. He said he reached out to state Sen. Keith Perry and Rep. Clovis Watson, but at this point only their spokespeople have responded.

He said he is now considering taking legal action. He brought up the problem during a routine visit with his attorney, who said he may need to refer Wilson to a group of litigators in Miami that specializes in dealing with government on issues like this one.

The decision to take a legal route isn’t about money, Wilson said.

“I just want this problem to be solved — for myself and all the other human, feline and canine habitants that are out here,” he said. “I don’t want anyone to get hurt.”

As for the alligator, it — and two others — have been removed from the lake.

The commission uses the Statewide Nuisance Alligator Program, which contracts with trappers to remove alligators 4 feet in length or longer that pose a threat to people, pets or property.

Wilson contacted SNAP after first seeing the alligator underneath his neighbor’s dock. But the responding trapper ended up catching three alligators along the shoreline near Wilson’s home, ranging from 6 to 8 feet in length, Wilson said.

Meanwhile, as Wilson continues to pursue the vegetation issue, Smith said the commission will keep striving to achieve a resolution.

“We will continue to work with Mr. Wilson and this community regarding Lake Lochloosa,” she said.

Kelly is a reporter who can be contacted by calling 352-392-6397 or emailing news@wuft.org.
Previous Florida Senate Passes Bill To Allow Therapy Animals In Court
Next Internet In Alachua County: The Options, Prices And Opinions