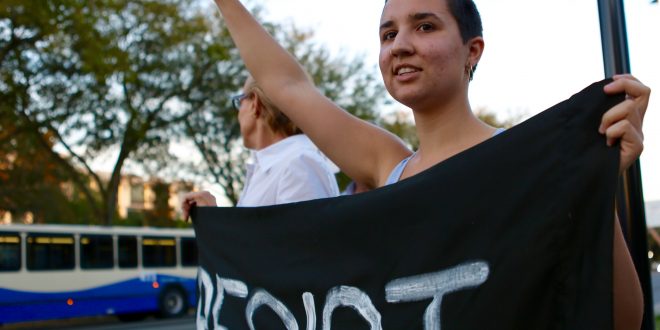 Marcela Mulholland, a University of Florida sustainability studies and political science student, raises her fist during an anti-Trump march in Gainesville in February. Another Gainesville march, the "March for Science," is scheduled for April 22. (File/ WUFT News)

A 2018 preliminary budget proposal released by the Trump administration in March proposes cuts to the Environmental Protection Agency’s funding by 31 percent, the Department of Agriculture’s by 21 percent and the Department of Health and Human Services’ by 18 percent.

For Danielle Ivey, who works as an ecotoxicologist in the University of Florida’s Center for Environmental and Human Toxicology, that is not good news.

Ivey — who’s set to start a graduate program in the fall at UF’s College of Public Health and Health Professions — said she’s worried that future budget cuts might impede her education and lessen her chances of finding work after graduation.

“It’s scary,” the 46-year-old said. “I don’t even know if my degree will be funded all the way through.”

Many people don’t think the work of scientists and researchers have an impact on daily life, which isn’t true, Ivey said.

“It’s important that people who are in science show the public that what we do affects them,” she said. “It isn’t some magical, mysterious, scary thing. It’s the planet, and it’s things that affect them on a day-to-day basis.”

To convey her message, Ivey decided to help organize the upcoming “March for Science” in Gainesville. The march is one of more than 400 across the globe expected to take place on April 22, Earth Day.

“The important thing is to relate to regular folks whose vote counts,” she said. “Relating to all of the regular citizens of Gainesville, having them come out and learn about what we actually do — I think that’s the most important thing.”

The less-than-2-mile march will go from the lawn north of UF’s football stadium to downtown Gainesville. At the end point, Bo Diddley Plaza, leaders in the local scientific community, including UF’s Vice President for Research David Norton, will speak to an expected crowd of about 500.

Ivey said that although the march is a nonpartisan event, politics have inevitably become a part of the conversation.

“It’s been made very clear that corporate interests are way more important than the environment or public health, and that’s my personal opinion,” she said. “It shouldn’t be political, but it is.”

Marchers will have the opportunity to send pre-made postcards that explain the importance of science-based policy to politicians, said the march’s lead organizer, Juan Zapata.

The UF electrical engineering student said the march is nonpartisan and isn’t meant to be divisive.

Corey Noble said that although he thinks the idea of a science march is wonderful, he supports Trump’s proposed budget cuts to the EPA.

“Most of what’s happening inside research and development is not from the government. It’s from private research,” the 21-year-old said.

Nevertheless, Noble said he is glad members of his community are using their First Amendment rights to voice their opinions.

“I don’t think anyone is saying the work that scientists and researchers do is unimportant and no one is discrediting those things,” he said. “I think it’s wonderful that we have a society that puts value on scientific reason.”