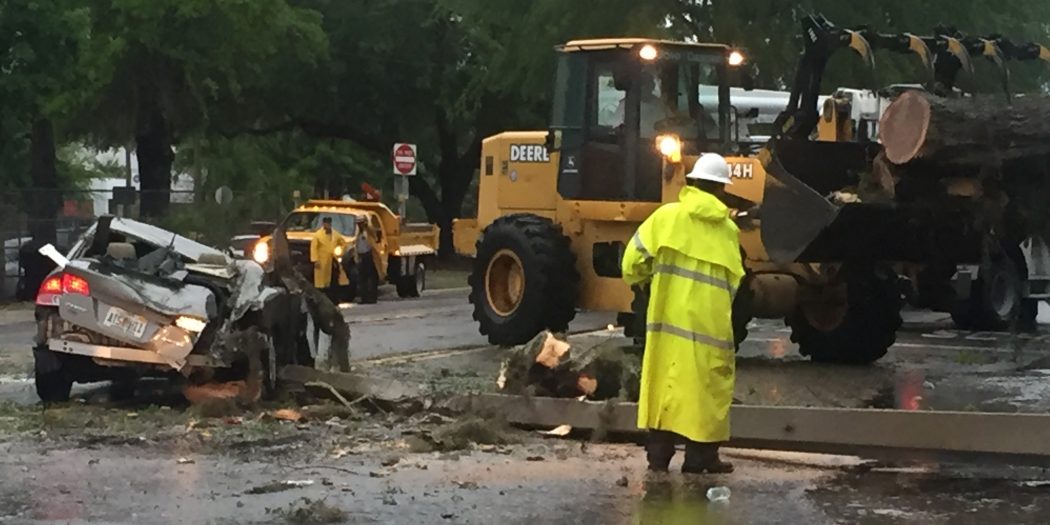 A downed tree that brought down a light pole led to Gainesville Police Department closing off part of street north of the intersection of 13 Street and 16 Avenue Tuesday morning. (Gaby Nunez/WUFT News)

A flooded street and debris were left behind among other damages as an uprooted tree landed on a vehicle near Gainesville High School Tuesday as storms blew through Tuesday morning.

Gainesville Police Department closed off the street north of the intersection of 13 Street and 16 Avenue for safety as an uprooted tree fell into traffic, bringing a nearby light pole down with it.

Disrupting two lanes of traffic, 19-year-old Aliyah Jones was not expecting the loud crunch on her passenger side.

A fallen tree by the intersection of 13th and NW 16th brought down a light post, the only known casualty is the vehicle. @WUFTNews pic.twitter.com/7DSjDYbDkh

A portion of the sidewalk remains closed until the uprooted tree is completely cleared, said a police service technician. @WUFTNews pic.twitter.com/PmzOSGlxEN

“I didn’t see it, I heard it,” the Santa Fe nursing student said. The tree fell onto her car, crushing the vehicle and leaving her in shock, said Jones.

She was stuck in traffic on her way to pick up her brother and sister from school when the accident happened. A woman from the car in front of her rushed to help Jones out of her four-door sedan.

“I’m thankful to be alive, a car is replaceable,” Jones said.

The road was blocked for approximately three hours, according to a police service technician. A portion of the sidewalk will remain blocked off in caution tape and closed to the public until the light post and uprooted tree are completely cleared.

The tree and the vehicle have been cleared, but the roads are still blocked by @GainesvillePD until deemed absolutely safe. @WUFTNews pic.twitter.com/LVPqaef7y5

Other streets in Gainesville were blocked as well as the storm downed power lines.

Approximately 15,000 people were without power due to the storm, a majority of the power restored by 11:00 a.m., according to GRU spokeswoman Tiffany Small. By noon, only around 35 people were left without power.

According to GRU’s Power Outage Map, less than 10 percent of customers were affected by the storm.

A neighborhood on 16th Avenue was also affected by the storm as fallen trees were hanging tangled among power lines leaving six houses without power.

More down power lines in a neighborhood down 16th avenue. Multiple GRU officials are attempting to restore power for residents. @WUFTNews pic.twitter.com/GvXRMuXEpP

Fallen trees and debris are tangled in the power lines keeping them just above the streets. @WUFTNews pic.twitter.com/tNjvkYSeN9

“I woke up around 9 am and heard lightning strike,” said Thomas Herlevich from his doorway. “I have a paper I really need to write and I don’t have wi-fi and still don’t have power,” the student said around noon.

GRU officials had to cut off interfering branches and restore power lines.

Though the storm brought damages and inconvenience, the rain helped resolve a rainfall deficit — Florida was in the middle of a severe drought.

The totals are just mind staggering! More rain fell in #Gainesville past four hours than past four months. #flwx pic.twitter.com/UIRlchsPY5

This drought is the most notable since the drought of 2012, according to University of Florida chief meteorologist Jeff Huffman. The National Drought Mitigation Center classified it as “severe” in nine counties Thursday, with more than 90 percent of the state of Florida considered to be in a drought.

Gabriella is a reporter at WUFT news and can be reached at 21gabnun@gmail.com or 305-299-1075.
Previous GPD Announces New Award In Honor Of Corey Dahlem
Next UF Health Shands Springhill To Expand With $36 Million Addition