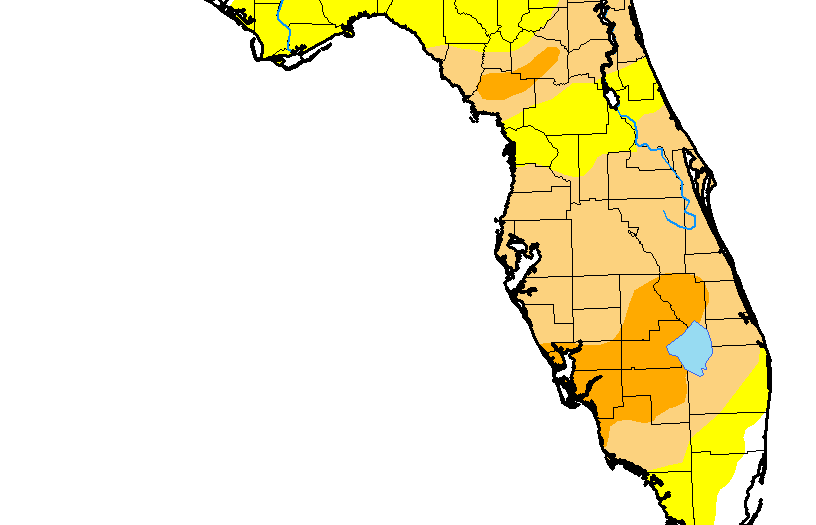 The map above shows the drought conditions throughout the state of Florida. Yellow indicates abnormally dry areas, beige indicates a moderate drought and orange indicates a severe drought. The U.S. Drought Monitor is jointly produced by the National Drought Mitigation Center at the University of Nebraska-Lincoln, the United States Department of Agriculture, and the National Oceanic and Atmospheric Administration. (Map courtesy of NDMC-UNL)

With over 90 percent of the state of Florida considered to be in a drought, the National Drought Mitigation Center classified the situation Thursday as “severe” in nine counties, including Alachua.

According to State Climatologist David Zierden, this is more of a short term drought, and rainfall has been lower since early October.

“This is the dry season for peninsular Florida and we expect a drying out during this time of year, but this year we’ve been much drier than normal,” Zierden said. “In fact, Gainesville right now is running second driest on record since October 1.”

This causes concern because a drought in a college town such as Gainesville could have many negative effects on students.

Droughts can have negative consequences on a student’s limited budget because prices for water or food could increase, said Fergus Keatinge, a University of Florida geography instructor over email.

“We could also see an increase in health issues related to dehydration and extreme heat,” Keatinge added.

The St. Johns River Water Management District website has mandatory lawn watering restrictions that specify days homeowners in the district may water their lawns, however, they are not in place due to the drought.

Restrictions include watering only when needed, but not between 10 a.m. and 4 p.m., and watering for no more than one hour per zone.

Currently, Alachua County has no drought restrictions in place.

This isn’t the first time Alachua County has experienced such grave drought conditions. An extended drought was worse in 2011 and 2012 in severity, extent and how much of the state it covered, according to Zierden.

The current drought is not as severe as the one Floridians may recall in 2012, but it is the most notable one since, said University of Florida chief meteorologist Jeff Huffman.

“We are in a very similar situation to what occurred in Alachua County in 2012,” said Christine Mundy, chief of the Bureau of Water Resource Information at the St. Johns River Water Management District.

The 12-month rainfall deficit for the end of February in 2012 for Alachua County was at 16.3 inches, according to Mundy.

A drought could mean a higher vulnerability for wildfires as well, especially with the peak wildfire season coming up in May.

Florida Forest Service reports show that since January 1, wildfires have impacted about 60,000 acres of land.

The dry season for peninsular Florida usually occurs in April and May – which lines up with wildfire season – with the rainiest season beginning in early June.

“[May] is a pivotal month because the use of water, whether through human use or plant use, is growing at a time when the rainfall is normally very low,” Mundy said. “I think that partly explains why wildfires are particularly troublesome during that time.”

The dry season for this year started a couple months earlier than it usually does.

“Alachua County, and most of Northern Florida, have been gripped in abnormally dry conditions for the majority of February and March,” Keatinge said. “This could very easily lead to us being placed on the water shortage order list.”

According to the official forecast from the National Oceanic and Atmospheric Administration’s Climate Prediction Center, above or below normal rainfall levels are projected with “equal chances” over the next 90 days.