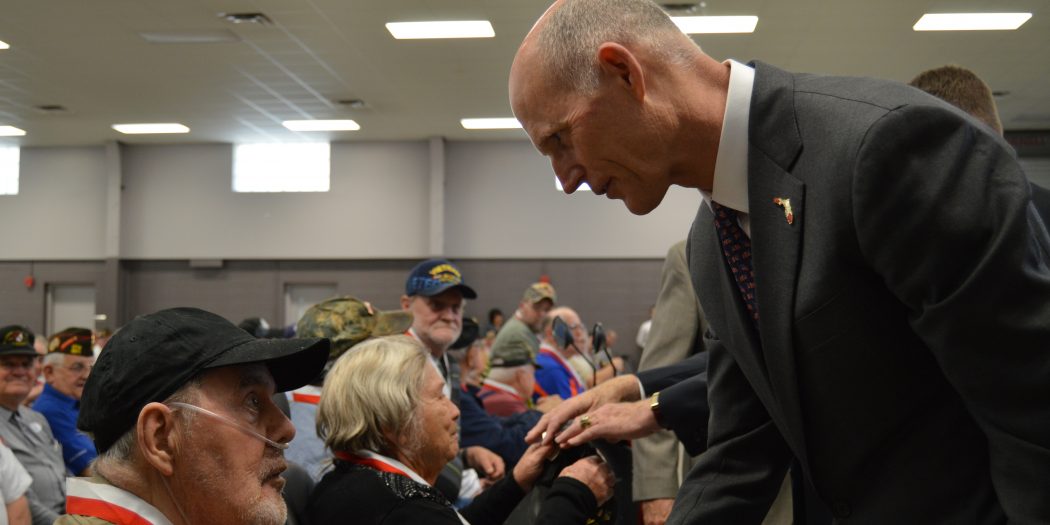 Gov. Rick Scott talks to Army veteran Sam Wynn, 82, after placing a Governor's Service Medal around his neck. He was one of 238 veterans honored during the event on Monday. (Melissa Gomez/WUFT News)

Kenny Merriken likes to say he’s alive today because of the grace of God.

On Monday, as he accepted the Governor’s Service Medal from Florida Gov. Rick Scott, he thought about the four years he served during the Vietnam War and the support he received when he came home from serving four years in the Navy. At 68, Merriken has lost the ability to walk, but with the help of the Department of Veterans Affairs and its rehabilitation facility in Lake City, he said he was able to make it out to Live Oak, where he and 238 other veterans received the medal for their service.

It was a Bible verse that kept him going, even through a time when he thought he wouldn’t come home from the war. Philippians Chapter 4, Verse 13 reads: “I can do all things through Christ who strengthens me.”

“The grace of God allowed me to be here,” Merriken said after Scott had placed the medal around his neck. “I owe my life to the Department of Veterans Affairs.”

About 300 veterans and their family members attended the ceremony hosted by the Governor’s Office and the Department of Veterans Affairs, held at the National Guard base in Live Oak. Steve Murray, communications director of the department, said about 10,400 medals have been given to veterans in 35 cities since 2013.

The turnout of the event had surprised them, he said, adding that despite the 275 chairs put out, some people were left standing.

“We just couldn’t believe the wonderful turnout,” he said.

As some veterans lined up to receive a medal from Scott, Art Berrigan stood among them, cradling a photo of his father, who served in the Navy, and his platoon. He shook Scott’s hand, telling him he was there to accept the medal on behalf of his father.

Edward Berrigan died in 1969 from cancer, so Art had called the governor’s office, in hopes of being able to receive a medal to honor his father’s service.

On Monday, with tears in his eyes, the 68-year-old Live Oak resident said being able to accept it for his father meant a lot.

“He loved the Navy,” he said. “That’s all he ever talked about, how great the Navy was to him.”

Art Berrigan said he tried to enlist, but was denied because of a stomach ulcer. Instead, he joined the Sons of The American Legion and continues to honor his father’s service.

Scott, who served in the Navy, said the award was a way to show his thanks to those who served.

“I want them to know that they’re appreciated,” he said.

For Merriken, being surrounded by veterans from World War II to the Vietnam War and receiving the award was humbling.

He remembers coming home after from overseas to a big white banner in the window of his home.

“Welcome home,” it read. His heart pounded. After losing a friend in the war, and nearly losing his own life, he said he almost lost all hope of living.

But by the grace of God, he said he was alive to see today.

“Whenever I see a Vietnam veteran, I say ‘welcome home, I’m glad you came back in a seat and not in a box,’” he said.

Melissa is a reporter for WUFT News. She can be contacted by calling 239-207-1626 or emailing melissagomez004@gmail.com
@@MelissaGomez004
Previous Protesters Rally 1 Month After Sabal Trail Shooter’s Death
Next March 28, 2017: Morning News in 90