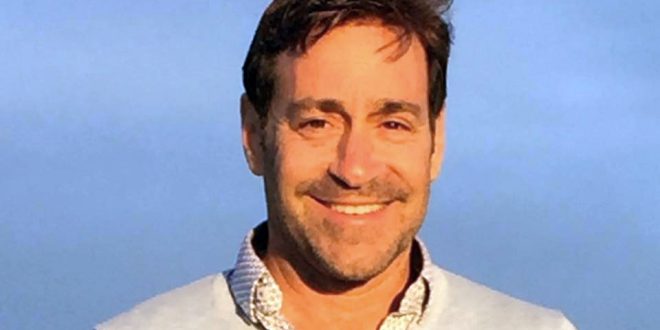 Scott Fried, 53, was diagnosed with HIV at 24 years old, and he has transformed his fear of dying into a love of life, centered on helping others overcome their fears. He has spoken to students across the country — including to some at the University of Florida on Monday — regarding sexual health, intimacy and self-acceptance. (Photo courtesy Scott Fried)

He had felt fearful before, over things like large dogs or finding hair in his ears.

But this fear was different. It was the kind that starts in the fingertips and travels to the toes.

A life-or-death kind of fear.

For on that June day in New York, Fried was diagnosed HIV-positive.

In the years since, Fried has watched 133 of his friends succumb to the disease, waiting for the day it would also inevitably consume him.

But 29 years later, Fried is no longer afraid and has chosen to embrace life and help others overcome their fears.

He and his HIV support group were also the inspiration behind the Pulitzer Prize- and Tony Award-winning musical “Rent.”

Fried, who spoke at the University of Florida on Monday to kick off Pride Awareness Month, talked with WUFT News by phone prior to his visit and then briefly in person during.

WUFT: Why did you choose to start talking to young adults about sexual health and empowerment?

Fried: I began for two reasons: one, because I didn’t want to be forgotten, and I thought I was going to die from AIDS, and two, because I had stumbled into this rich world that was offering me an opportunity to learn from people as they were learning about life upon their dying.

There is something in the act of letting go of your life, knowing that you’re going to die, that emboldens you and makes you bigger. I wanted to share the answers we were learning together. I was arriving into the story of their life at the end, and there was this rich conclusion, full of lessons of courage and dignity and facing fears and so much forgiveness and understanding and compassion.

What HIV stigmas have you faced in society, and how are you combating them?

We’re talking 1987-1988. What I discovered was a time in the world that was frightening and scary, and at the same time, there was this surplus of love and overflowing of compassion from everyone I surrounded myself with because we knew we were dying.

Do you think HIV stigma is decreasing with the growth in knowledge of the disease?

I wish I could say that, but it’s not. I think that it may be disappearing in the more overt circles, where people understand you can shake people’s hands, have sex with someone who is HIV-positive, and you can hire people with HIV. We understand that in 2017, but the place where stigma lies is much more covert. It’s much more underground. It’s the underbelly of the virus, and that’s where the stigma lies, where it is safe to stigmatize: on the internet and on social media apps.

There is still stigma, and it’s in the shadows of social media, where you don’t have to show your face.

What is the central message you hope to relay to others?

I want to empower students to understand the different ways they can change the world, and one of those ways is in having pride in who you are. That pride doesn’t necessarily have to do with LGBTQ particularly, but in whatever it is and whoever it is you are: the gold and the shadow, the dark and the light, the secrets and the victories.

All of it is necessary to make a difference in the world. Ultimately, the message has a lot to do with vulnerability and authenticity. Our greatest power in life is in understanding the intersection between vulnerability and authenticity. The goal of an elegant life is to be able to stand in the center of your sorrows and your joys and be authentic and be vulnerable, and that’s your power.

How can people empower themselves now and be vulnerable and authentic in their own lives?

It comes down to being enough and knowing you are enough exactly as you are with the words in your pockets, and the mistakes that you make, and the secrets that you keep. A life of self-improvement starts with self-acceptance. Even if you don’t want to be that person, it’s the person you were meant to be.

This is pride awareness. Pride starts with acceptance and inclusivity, not just of everyone around us, but of ourselves — accepting ourselves for who we are.

How do you reach self-acceptance and inclusivity?

Be able to bow your head to who you are and know that in the darkest moment, you’re still enough, and there must be a place for you at someone’s table. In your life, there are people who will open their arms to you and receive you in spite of your contradictions.

A big impediment to accepting yourself and becoming the person you are meant to be is fear. How do you overcome it?

Actually, be who you are, regardless of how it looks because what is missing in this world is you. That’s a lifetime of work right there. It doesn’t happen in one semester, but you can start now.

Katie is a reporter at WUFT News who can be contacted by email at kmellinger13@ufl.edu.
@@kmellinger13
Previous Orlando Prosecutor Won’t Seek Death Penalty For Those Charged With Murder
Next Police: 3 Carrying Meth Arrested In Theft At Construction Site