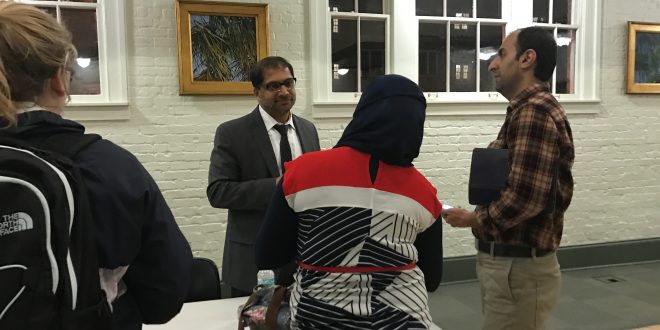 Khurrm Wahid (in suit), a founding member of Emerge USA, talks with attendees of Tuesday night's forum at the University of Florida that centered on President Donald Trump's new travel ban. Wahid said he expects the Trump administration to implement the executive order in the coming days. (Carly Breit/WUFT News)

Guita Banan sat in the second row at Emerge USA’s town-hall meeting Tuesday, listening to the discussion about the possibility of another executive order from President Donald Trump that would ban people from her country, Iran, from coming to the United States.

“I know people whose parents already made plans for coming here that had to cancel it,” the 29-year-old University of Florida physics doctoral student said after the meeting. “I know people who had job offers from the U.S., and they had to say no because they thought they wouldn’t be able to get a VISA.”

Banan was one of about 40 students and residents who came to the panel-style town hall on UF’s campus in Gainesville.

She asked the panel of experts — which included two UF professors and a South Florida lawyer who co-founded Emerge USA, a national organization with the goal of bringing Muslim-Americans into civic engagement — how the proposed travel ban, Trump’s second, would differ from the first, which was shot down by a federal appeals court earlier this month.

Khurrum Wahid, the lawyer, said the upcoming executive order will have basically the same content as the first, but the administration will probably change a few things to make it lawful. He expects it to go into action in the coming days.

The changes, Wahid said, will likely include: giving advanced notice of the ban (the first was enacted immediately), excluding green card holders (the first disallowed them from the seven majority-Muslim countries listed in the ban), and allowing people into the country if they are in transit, by plane or otherwise, when the ban goes into effect (the first made them return upon landing).

The administration will also likely add a non-Muslim country to the list of banned countries — Iran, Iraq, Libya, Somalia, Sudan, Syria and Yemen — so it can argue that it is not a Muslim ban.

“My money’s on North Korea,” he said.

Not unlike the first travel ban, Wahid said he expects to see protests and people organizing if they believe the ban does not pass the test of constitutionality.

“We’re seeing people coming together from all genders, all walks of life, all different identities and saying that this is not the America we want,” he said. “We want a different America.”

Another panelist, Gwendolyn Zoharah Simmons, a UF assistant professor of religion, said the travel ban promotes Islamophobia but isn’t the only action from the administration that does so.

Talks about changing the name of the government program “Countering Violent Extremism” to “Countering Islamic Extremism” could detriment the public perception of Muslim-Americans.

“The CIE, if it were to become the focus of this program, certainly stigmatizes and criminalizes Muslims across the country,” she said.

After the meeting, she told WUFT News that those concerned can take action locally to effect change. Several activist groups in Gainesville already have, she said.

Pre-printed letters to U.S. Rep. Ted Yoho, R-Gainesville, who expressed his support of the first travel ban, lined the meeting’s check-in table at Ustler Hall. They all had the same form text, which said in part: “I urge you to push back on this measure and protect the rights of citizens, green-card holders and potential immigrants alike. I hope that you will consider my position when you represent me in congress.”

The three panelists said meeting participants should take action if they disagree with the travel bans by signing one of the letters, which would be sent to Yoho later this week.

Messages left for Yoho and his media-relations team at his two Florida offices and on his cell phone weren’t immediately returned Wednesday.

Carly Breit is a reporter at WUFT News. She can be reached at 954-892-2308 or carlybreit@gmail.com.
@@The_Breit_Side
Previous Gator Baseball Falls Apart In Ninth, Suffers First Loss
Next Police Remove Protesters From Inside Sabal Trail Pipeline