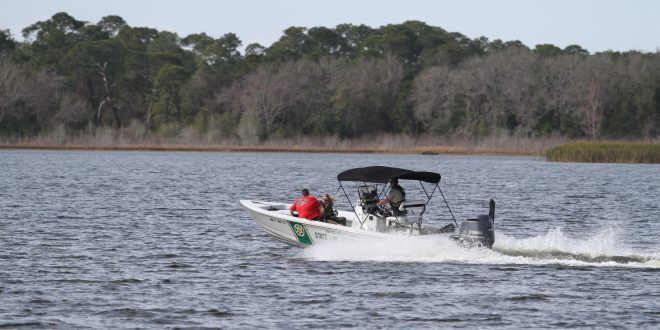 Authories search today for a man who went missing after an early-morning boating accident on Lake Grandin in Interlachen. (Eric Heubusch/WUFT News)

By Eric Heubusch and Teal Garth

More than 24 hours after a fishing boat capsized in Lake Grandin, the body of Kenneth Edward McCann Jr. has been recovered near the location he was last seen after the accident.

The ongoing investigation of the boating accident is being conducted by the Florida Fish and Wildlife Conservation Commission.

Despite a day-long search, the Putnam County Sheriff’s Office couldn’t locate a man who went missing in Lake Grandin in Interlachen after his boat capsized this morning.

The office received a call about 5:30 a.m. that someone was yelling for help in an area near the lake, Cpt. Hansel Woods said. When deputies arrived, they determined that the cries for help were coming from the water, he said.

A nearby boater helped the deputies in their search, and they found a 33-year-old man clinging to a capsized boat and helped him out of the water. The man told the deputies that another person from the boat, believed to be his father-in-law, was still missing in the water, Woods said.

Deputies then launched into a search, which included a dive team, but hadn’t found the missing man as of 5 p.m. today. But the search will continue until the person is found, he said.

“Sometime after sunrise, we determined that it’s a small enough area that our search moved from a search-and-rescue basically to a search and recovery phase,” Woods said.

The sheriff’s office called in additional resources from the Clay County Sheriff’s Office to aid the divers, who worked in rotations because the water was cold, he said.

“It seems like a nice, warm day, but the water temperature is pretty cold,” Woods said. “So they can’t stay down for very long periods of time.”

Deputies are unsure what caused the boat to capsize or if there were life vests onboard, he said.

Ashley Padgett, who lives close to the lake’s public boat ramp, said a deputy knocked on her door this morning asking if her family owns a boat. After telling the deputy they didn’t, Padgett went outside to look around.

“You could hear the guy hollering,” Padgett said. “He was hollering for someone to help him. His father-in-law was drowning.”

Wayne Gingerich, who also lives near the lake, said that although the boat ramp is supposed to be used only during daylight hours, people often launch their boats before the sun comes up.

“I used to [boat before dawn] when I was a lot younger,” he said.

Eric Heubusch is a reporter at WUFT News in Gainesville, Florida. He is a senior at the University of Florida majoring in journalism.
@ericheubusch
Previous Pulse Gunman’s Widow Pleads Not Guilty To Aiding Husband
Next Jan. 18, 2017: Afternoon News In 90