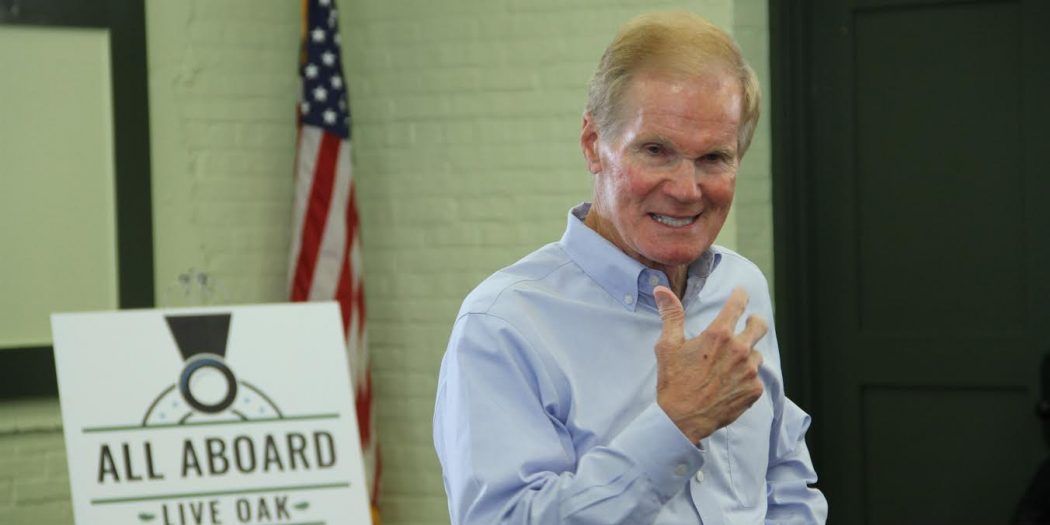 Sen. Bill Nelson D-FL talks about growing up in Florida and his experience as an astronaut during his visit to Live Oak on Friday morning. Nelson has promised his support for the city's efforts to become a train stop for Amtrak. (WUFT News/Jordanne Laurito)

On Friday morning, Sen. Bill Nelson D-FL spoke at an All Aboard Live Oak meeting to show his support for the city’s efforts in becoming a train stop on Amtrak’s Sunset Limited Line route.

“It’s a part of your heritage,” he said, referring to the origin of the city, named for the large live oak tree which stood beside its train depot built in 1909.

When Hurricane Katrina made landfall in 2005, it destroyed much of the Sunset Limited Line, and the service was halted indefinitely from New Orleans to Jacksonville.

Three years later, Congress passed the Passenger Rail Investment and Improvement Act (PRIIA), allowing Amtrak and the Southern Rail Commission (SRC) to resume this route. Several stops have been reopened, but so far, the Live Oak stop has not.

Nelson announced his intention of supporting Live Oak’s restoration as an Amtrak stop, and encouraged Live Oak representatives to come to Washington and testify during a hearing.

Additionally, he promised to get Amtrak representatives to come to Live Oak.

“The people want it, and we’re going to make that case,” Nelson said.

All Aboard Live Oak is hoping to present a petition with 2,000 signatures to Amtrak and the SRC. So far, they have about 800 online signatures, according to spokeswoman Brianna Barnebee.

“We haven’t even counted the paper signatures yet,” she said. “We have a huge stack of those, and it just keeps increasing.”

Live Oak councilman Keith Mixon applauded Senator Nelson’s ideas, and said the city is “very excited” to have his approval.

Mixon predicts the process will take about two years to complete.

Susan Lamb, who works at the nearby Spirit of the Suwannee Music Park, said that an Amtrak stop in Live Oak would facilitate travel for the thousands of music fans who visit the park every year.

This weekend, she estimates over 20,000 people in attendance of the “Hulaween” event at the Spirit of the Suwannee Music Park, named for the hula hoops people bring to dance with.

This is the fourth year the park has hosted this event, and Lamb believes it’s the biggest festival they have. The event includes over fifty bands performing live, as well as yoga, slacklining and mindful meditation.

“Every motel within forty miles of us is booked,” she said, “Plus, the grounds are covered with people.”

Lamb recalled Amtrak passing through Live Oak in February, when hundreds of people stood by the tracks, waving and hoping the inspection train would stop. It did not.

“It’s something our community wants. We’re a growing community, and we have the park,” she said. “The people that come to this, come from all over the United States and other countries.”

Jordanne is a reporter for WUFT News. She can be reached at news@wuft.org or 352-392-6397.
Previous What The One Mill Ballot Issue Means For Alachua County Students
Next FEMA Opens Disaster Recovery Center in Putnam County