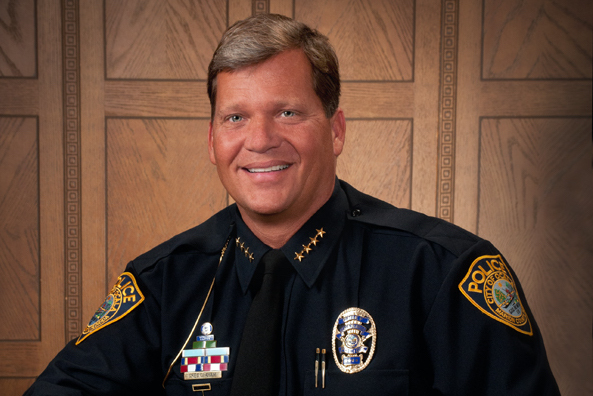 Attorney Bobi Frank, representing the accusers, addressed the council during its regular meeting. She requested they place Graham on administrative leave until the complaints against him are investigated.

According to Frank, Graham’s suspension is necessary “not to discipline [Graham] prematurely, but in order to maintain the integrity of the investigation.”

Frank said Graham’s “mere presence in the building is a constant, everyday reminder to the witnesses that are going to prove these allegations against Chief Graham, and it’s a re-victimization of the victims on a daily basis as well.”

The council’s resolution to begin the suspension process, proposed by Council President James Hilty Sr., passed by a 4-1 vote. Hilty said Graham’s suspension was necessary for “his own safety.”

“I’m trying to preserve the integrity of the investigation for both sides,” Hilty said. “I go way back with the chief on many different avenues. I’m not passing any judgment whatsoever.”

“I’m just trying to do what is right for the citizens of Marion County,” he said.

Guinn, who has spoken publicly about his support for Graham and said he does not intend to place him on suspension, said Tuesday he believes that the council was “intimidated” into complying with Frank’s request.

“I don’t know what neighborhood you guys grew up in,” Guinn said, “but I grew up with bullies like that. And it’s sad that you get intimidated like that, and made the decision you made.”

The council also voted 3-2 to hold a special meeting to determine if it will decide to place Graham on administrative leave with pay, and how long his suspension would be.

The meeting is scheduled for Friday at 11 a.m. Graham will be allowed to speak at the hearing.

“This is about getting the process out in the open,” councilman Matthew Wardell said. He voted to hold the meeting. “Right now, this community feels like it’s not.”

After the council meeting Tuesday night, Jimmy Gooding, an assistant attorney for the city of Ocala, confirmed that Graham is still currently an active city employee, pending the results of the council’s vote on Friday. He earned $217,100.88 in total compensation for 2015, according to city payroll records, as the city’s ninth-highest compensated employee.

“The special meeting is going to be whether to suspend the police chief, and if so, how long, or under what terms,” Gooding said.

The council also discussed Graham’s current contract with the city, which expires on October 20. According to Gooding, if the council votes to suspend Graham, any remaining time on his suspension would continue after his contract is renewed.

The city will be holding ethics hearings regarding the allegations against Graham on Wednesday at 7 a.m., 3 p.m. and 9 p.m. After Frank requested that the council prevent Guinn from attending the hearings, to prevent him from altering the outcome, he responded that he will still attend all three meetings.

“If you don’t want me to go,” Guinn said, “send somebody to arrest me.”

Over the course of the meeting, outbursts could be heard from the gallery, including a round of applause after the council approved the resolution to consider suspending Graham, and occasional yells of “suspend the mayor.”

Gregory Jenkins lives in Ocala and attended the meeting to speak about his utility bill. He said, given what he calls “severe” allegations against the chief, he believes that Graham should be suspended.

“I believe that under the circumstances, the police chief would have the moral responsibility to step aside and allow the investigation to be conducted transparently,” he said. “I think that doing so would put the community at ease…and that justice would be served.”

Alex is a reporter for WUFT News and can be contacted by calling 407-902-8783 or emailing asargent@ufl.edu.
@AlexHSargent
Previous As Fla.’s 4,000 Bears Stir, Officials Funding Projects For Reducing Human Interactions
Next How Do You Keep Dust Down On A County Road? Don’t Ask Gilchrist County’s Commissioners