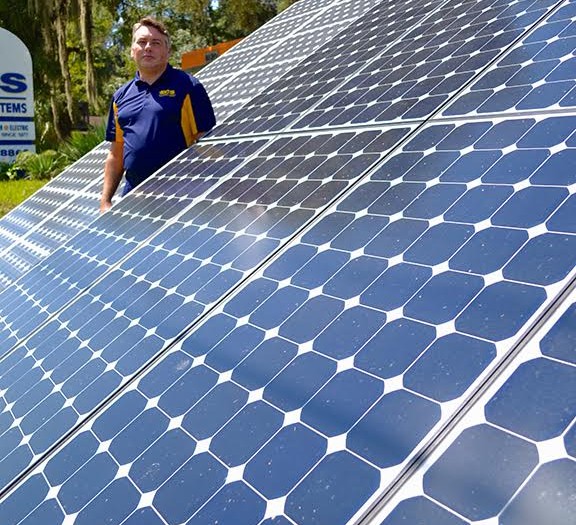 Brian Elsmore, COO of ECS Solar Energy Systems, stands between the grids of solar panels outside of his business. The panels supply solar energy to his building. (WUFT News/Danielle Veenstra)

Amendment 1, the Florida Solar Energy Subsidies and Personal Solar Use Initiative, is up for vote.

If the amendment receives enough votes to pass, it will give people the right to own and lease their solar equipment. Meaning solar users can sell their solar energy to their neighbors.

However, the second part of the amendment gives state and local government the authority to lay charges on solar power, according to Tim McLendon, a staff attorney at the Center for Governmental Responsibility.

The amendment gives the government the ability to control solar equipment and the costs that utilities pay to support solar users access to the grid and back-up power.

“It should have no effect on our net metering customers,” Meek said. “Everything will be the same going forward.”

According to the Solar Energy Industries Association, people generating solar power can use net metering or the feed in tariff as a way to control their electricity bills.

The feed in tariff agreement states that utility companies will buy all of the electricity that solar users produce. People who choose this option do not use any of the solar electricity they produce because it goes straight into the grid.

Brian Elsmore, co-owner of ECS Solar Energy systems, installs solar hot water and solar electric for Central Florida. He deals with the utility companies directly when trying to get his clients connected to the power grid.

“GRU makes me jump through all their hoops,” Elsmore said.

Gainesville’s Mayor Lauren Poe said the city is a national leader in solar energy and was the first to provide a feed in tariff.

He said he strongly supported Amendment 4, which was passed on Aug. 30 and dealt with tax exemptions for homes and businesses with solar power. But, he doesn’t support Amendment 1.

“It’s keeping their [the utilities] control over power, including the solar that the individual produces,” Mayor Poe said. “It benefits them, not the 17 million people in Florida.”

Supporters of Amendment 1 gathered a lot of money for its cause. Most of the $16 million came from utility companies like Florida Power and Light, Duke Energy and Tampa Electric Company.

She said Duke Energy is a strong supporter of solar power and believes in protecting the environment. Grant also said Duke wants to take a “balanced approach” to solar power so that it is fair to all customers.

“We know that we need a variety of sources to provide power 24/7,” Grant said. “We see solar as a growing part of that portfolio moving forward.”

Danielle is a reporter for WUFT News and can be contacted by calling 352-392-6397 or emailing news@wuft.org.
Previous Micanopy Provides Relief For Horseshoe Beach Residents Following Hermine
Next September 7, 2016: Afternoon News in 90