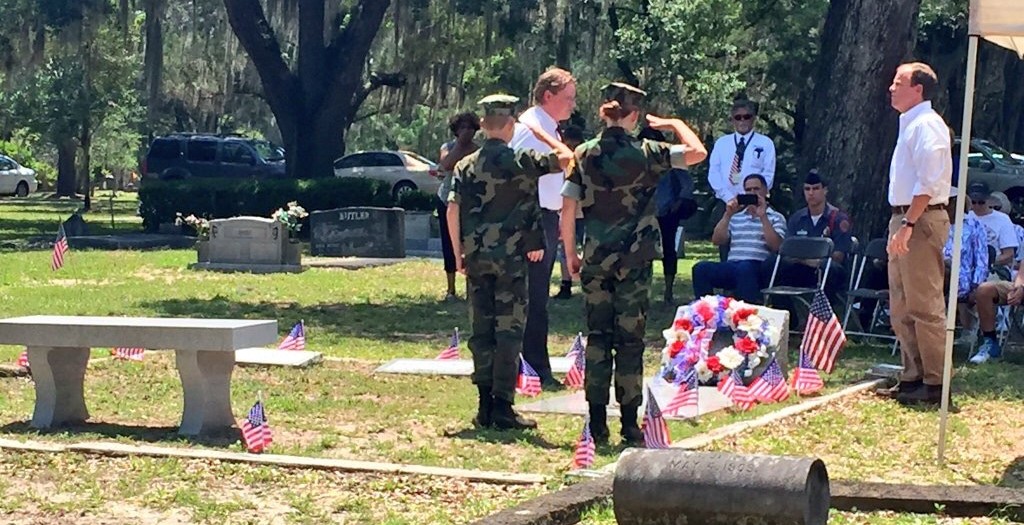 Members of the Milton Lewis Young Marines perform the flag folding ceremony at Evergreen Cemetery. They told of the significance of the 13 step process detailing the meaning to each of the folds.Milton Lewis' family members & members of the Milton Lewis Young Marines honor his name with a wreath-laying ceremony. For his valor and devotion during the Battle of Tulagi, Corporal Lewis was awarded the Navy Cross posthumously.

The sound of military taps filled the air at Evergreen Cemetery as the Milton Lewis Young Marines and cemetery staff honored Corporal Milton Lewis in the afternoon heat for their Memorial Day Ceremony.

Corporal Lewis was the first Alachua County resident to die in combat while serving in World War II. He was awarded the Navy Cross for his valor and devotion at the Battle of Tulagi.

The Young Marines, who are taught honor, courage and commitment, performed a flag-folding ceremony. A wreath-laying ceremony, honoring Corporal Lewis, concluded the event.

“…Heroes are not created, they’re born that way and then it’s revealed at the appropriate time what their true nature is…,” said Ken Reeves, Corporal Lewis’ great-nephew.

Hundreds of cars lined the parking lot of the Oaks Mall Thursday morning, waiting for …