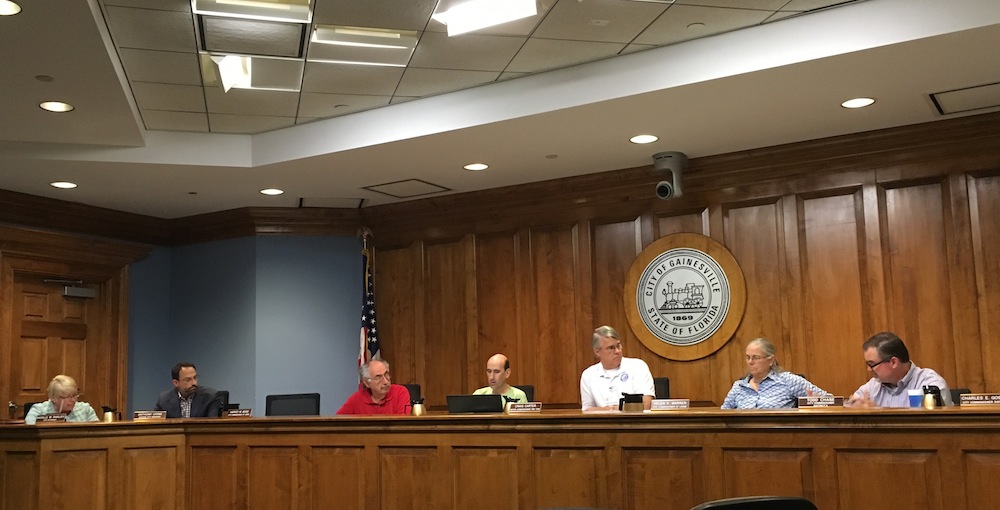 Gainesville city commissioners discuss what to do about Alachua County's lawsuit against the city over an old RTS facility. (Abigail Doupnik/WUFT News)

Alachua County filed a lawsuit April 22 against the city. The suit concerns a piece of land given to the city in the 1980s to host an RTS facility. The future of that facility has been in question since RTS administration moved to a new location in September.

The City Commission met in a special meeting Thursday to discuss their action on the conflict.

“The county has placed us in an adversarial position,” Shalley said. “We simply have not been given the opportunity to gather the facts.”

According to Shalley, the city notified the county of its interest in the property in December.

City commissioner Todd Chase said he learned of the county’s actions via the news, instead of through any actual communication between the two governments.

“I encourage them to please just drop this because it’s just unnecessary,” Chase said.

City commissioner Helen Warren was also taken aback at the quick escalation of the county’s actions.

“We’re one block away from the county building and to have this course of action … We need to do a little bit better than that,” Warren said.

The meeting ended with a motion to contact the county via letter, requesting that the county withdraw its lawsuit.

The city commission is also requesting that city and county staff meet informally to exchange information, then set up a joint city-county meeting before any further legal actions are made.

Abigail is a reporter for WUFT News and can be contacted by calling 352-392-6397 or emailing news@wuft.org.
Previous After Tree Fest, 40,000 Seedlings Destined For Little Orange Creek
Next Funding Troubles Has Gainesville Homeless Shelter Worried