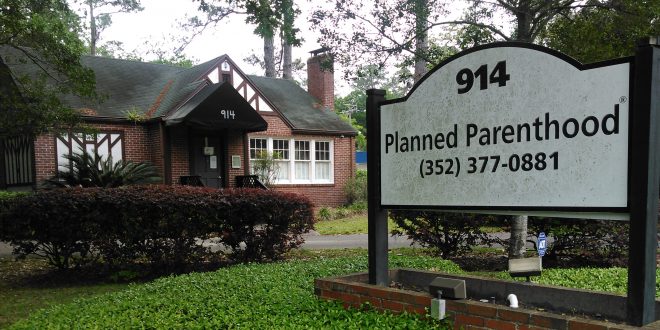 Planned Parenthood's Gainesville center on Northwest 13th Street on Thursday. The center will lose its $30,000 in funding from the Alachua County government because of Florida's new abortion law, House Bill 1411. (Claire Campbell/WUFT News)

A video of a woman yelling at Florida Gov. Rick Scott at a Gainesville Starbucks went viral earlier this month.

The woman condemned his decision to sign HB 1411, which has gotten some backlash for reducing public funding for organizations associated with abortion clinics.

Specifically, the law bans Medicaid funding for organizations that provide abortion services, and it also prevents local governments from funding such organizations.

The law, which passed on March 28, makes Florida the 12th state to defund Planned Parenthood, according to CNS News.

How impactful and far-reaching the bill will be remains somewhat unclear, and some women’s health care providers are unsure of how it will affect them.

The Florida Department of Health is also reviewing its options, department spokeswoman Mara Gambineri said. But regardless of the law, Gabineri doesn’t expect any effects to its family-planning services, which include post-partum checkups, pregnancy testing and pre-conception counseling but not abortion.

“Family planning is a core function of public health, and there will be no interruption in services,” she wrote in an email.

And though it does not offer abortion services, it will still lose about $30,000 in funding because of its attachment to the parent organization, which offers abortions elsewhere in Florida, Goodhue said.

The $30,000 comes from the Alachua County government and would be lost because of the law’s ban on local funding to organizations related to abortion.

The cost of services at the Planned Parenthood in Gainesville may go up because of the funding loss, but the organization is still reviewing the situation, Goodhue said.

Alachua County commissioners have been discussing possible options because the county “has taken a stand against wanting to end this funding,” Goodhue said.

“These are not the priorities that we want legislature to focus on,” she said, “yet it happens year after year. … This is just a pattern in Florida. This is nothing new.”

Katherine Gratto, executive director of the Women’s Resource and Medical Clinic in Gainesville, described herself as pro-life and said her clinic doesn’t offer abortions.

Nevertheless, it does present abortion as an option to women, and Gratto said that if a woman chooses to have an elective abortion, she isn’t treated any differently at the clinic.

“I don’t know that our government can regulate our personal choices,” she said.

Claire is a reporter for WUFT News and can be contacted by calling 352-392-6397 or emailing news@wuft.org.
@ufjoustudent
Previous Gainesville Mobile Market Taking Produce To Those In Need
Next Where Will Alachua County Place Its Historic Lion Statues?