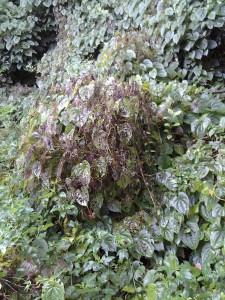 The invasive air potato vine has met its match with the introduction of the air potato leaf beetle. This beetle could control the aggressive plant.

A foreign friend is here to help agriculturalists, and it’s here to stay.

For farmers in Florida and beyond, the invasive air potato vine — named for its potato-shaped bulbils — has been a persistent annoyance to Floridians for nearly a century, but with the discovery of a dime-sized beetle from across the ocean, this may soon change.

The air potato leaf beetle, Lilioceris cheni, was found in 2002 feasting on the air potato vines and bulbils of the Katmandu Valley in Nepal.

After years of research, the United States Department of Agriculture determined the beetle is “extremely host specific” to the air potato leaf, Dioscorea bulbifera, and can be used to take control over the aggressive plant, which can grow eight inches a day.

About 300,000 beetles have been released in 42 counties across Florida in the past three summers throughout 1,000 parks, preserves, forests and conservation lands in the hopes of undoing the damage of the horticultural horror.

Because the air potato didn’t have any natural enemies in Florida after it was introduced in 1905, it was able to overtake native organisms and strangle competing vegetation.

“[The beetle] is the best solution,” Eric Rohrig, a biological scientist for the Methods Development and Biological Control in the Division of Plant Industry, wrote in an email. “Besides biocontrol, only two options exist.”

Those options — chemical and mechanical methods — can be difficult and costly.

Chemical treatments can be expensive because repeat sprays over several years are required to have any impact. Side effects include chemical damage to surrounding plants and leakage of the toxic pesticide into the aquifer.

Manually pulling the vine is time-consuming and expensive, Rohrig said. To completely rid the area of air potatoes, removal of the underground tubers is necessary and very difficult. This method still does not guarantee extermination.

Other than being physically invasive, the plant also invades Floridians’ checkbooks.

“In the case of the air potato, the average Floridian was paying for the control in public spaces and natural areas via property taxes, even if they did not have the weed on their property,” J. Stacy Strickland, the multi-extension director for Hernando and Sumter counties, wrote in an email.

The release of the air potato leaf beetle is getting results, but careful precautions were taken before its release.

“We go in search of natural enemies in the native range of the introduced invasive (species), and that is called classical biocontrol,” Strickland said.

USDA’s Agriculture Research Service Invasive Plant Research Laboratory imported the beetles and did tests in a government certified quarantine facility for approximately nine years until they were granted permission to release the beetles.

“Once the beetles were approved for release, USDA-ARS partnered with us to begin a statewide, mass rearing and release program,” Rohrig said. “This year, UF began to participate in beetle releases as well. All three of our agencies participate in various research on the beetles, the vines and the impact of releases.”

The University of Florida, the Florida Department of Agriculture Consumer Services’ Division of Plant Industry, the Fish and Wildlife Service, the USDA’s Animal and Plant Health Inspection Service Plant Protection and Quarantine sector and its Agricultural Research Service all provide funds for the beetle’s releases. The figures associated with these funds are generally not disclosed to the public.

These funds are used to pay salaries and buy supplies to support and transport the beetles for release. All of the connected agencies will continue releasing them as long as funding for the project continues and control of the vine is possible.

“Biocontrol is free, once it’s out there — continual, permanent and requires no labor other than the initial releases,” Rohrig said.

Although biocontrol is a slow process and can take several years or more to see the full effect, it still shows the most promise.

“Benefits (of the beetle) include reduced use of herbicide, which is good for the environment, and saves money spent by land managers and homeowners to control the vine and reduction in vine biomass, which reduces the negative impact the vines have on the environment by smothering native vegetation,” Rohrig said.

Kyle is a reporter who can be contacted by calling 352-392-6397 or emailing news@wuft.org.
Previous The Number Of Homeless Students Increased
Next Oct. 24, 2014: Afternoon News in 90