Pamela Calero envisions a future where she can enjoy a nighttime performance at the old City Auditorium then take a trolley downtown for dinner.

And her vision might soon be a reality, except the auditorium won’t be called that anymore. The Ocala Symphony Orchestra is renovating the 80-year-old building, giving it a new life and a new name — The Reilly Arts Center.

“What our goal is, is really to help connect Tuscawilla Park to our downtown square and just add to the cultural benefits of the community,” said Calero, the Ocala Symphony Orchestra’s executive director. “Our vision is, ‘memories are made.’”

The city-owned building has held a lot of memories as one of the longest-standing buildings in Ocala. Built in 1932 under Franklin D. Roosevelt’s “New Deal,” the auditorium, located at 836 NE Sanchez Ave., has housed acts like Buddy Holly and the Boston Pops, as well as high school proms in the 1950s and 60s. More recently, the auditorium sat vacant for a number of years.

The symphony, which currently plays out of the Ocala Breeders’ Sales Auditorium, first expressed interest in securing a location of its own about five years ago. After searching through available sites that fit its criteria, it settled on the City Auditorium just two years later.

To officially start the renovations on the performing arts center, the symphony has a fundraising goal of $2.6 million. But construction can begin in earnest when $2.3 million has been raised. So far, donors have contributed just over $2 million.

To raise interest, the group is offering tours of the facility and putting together a video about its renovation efforts. Minor construction is already underway. A team has removed the modern ceiling to reveal a 1930s original. And while there’s no set timeline, Calero said the symphony hopes the project will be completed by September of next year in time for the 2015-16 concert season.

If all goes according to plan, about 650 seats will have been added in the downstairs and upstairs areas by then.

Calero expects the renovation to be beneficial for symphony attendance, especially considering the auditorium’s location in the heart of Ocala. She said she also believes the new Reilly Arts Center, named after one of its largest donors, will benefit other cultural and community organizations as well as the area’s economy.

“I think it’s a great place and right now, especially with the economic boom we’re seeing happen in our downtown area, we’re hoping it will be an anchor point,” Calero said. “And we expect it will be.”

The city of Ocala extended the symphony a 30-year lease of the building, with rent at $1 per year. The symphony was expected to be self-sufficient in funding the construction.

The renovation effort is part of the larger “Reinvent Tuscawilla Park” project, according to city manager Matthew Brower. The project is a part of a regional effort to bring people to Ocala to enjoy what the city can offer, including performance arts.

“Although the project is very small in scope, its impact on our broader goal and strategic plan is enormous,” Brower said.

The arts center will still be available to rent out for events like birthdays, anniversaries and corporate meetings.

Aside from a fresh coat of paint, most of the renovations to the building affect the interior, which will still match the art deco theme of the exterior.  It is important to the symphony, and to the community, that the history of the building be preserved.

Calero said that the symphony has received great support from the community in regards to the renovations.

“People are tied to this building for different reasons,” Calero said. “They’re tied to it for historic reasons—maybe they experienced an event in their life that took place here. Some people are just really interested in having a place for the arts in our community and are excited to see this building used for that function.”

Historic Ocala Preservation Society member Suzanne Thomas said that she was looking forward to seeing the building be used again in a productive way.

Thomas said many locals have great memories of events, like graduations or proms, held at the auditorium.

“I’m just very excited about the fact that it will be utilized by the city for people to enjoy once again,” she said. “People who grew up here have a great fondness for it. It’s a great building.” 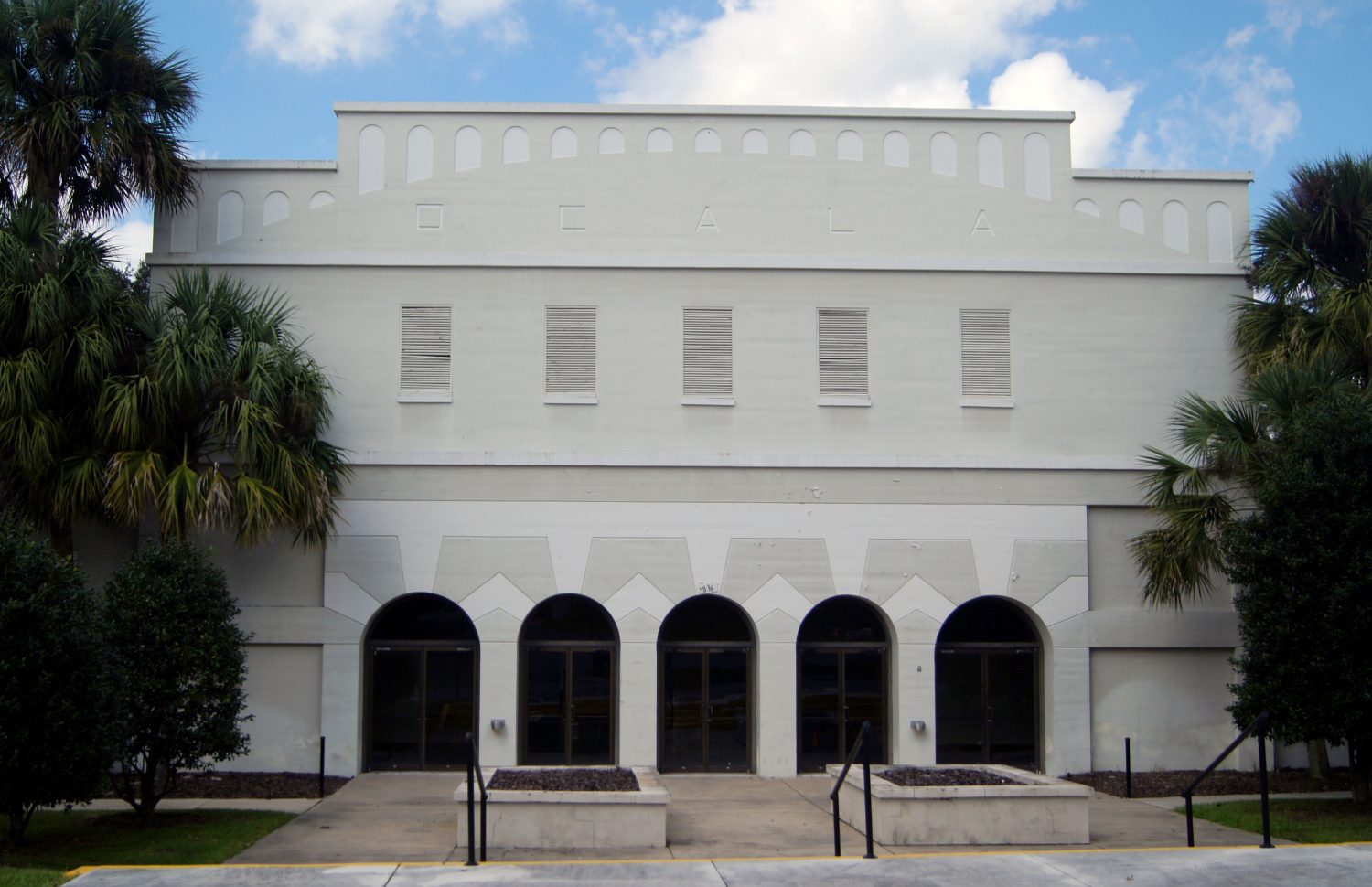 Built in the 1930s, the Ocala City Hall – now renamed the Reilly Arts Center – will soon see a complete interior renovation. The Ocala Symphony Orchestra is funding the makeover, which will cost approximately $2 million. 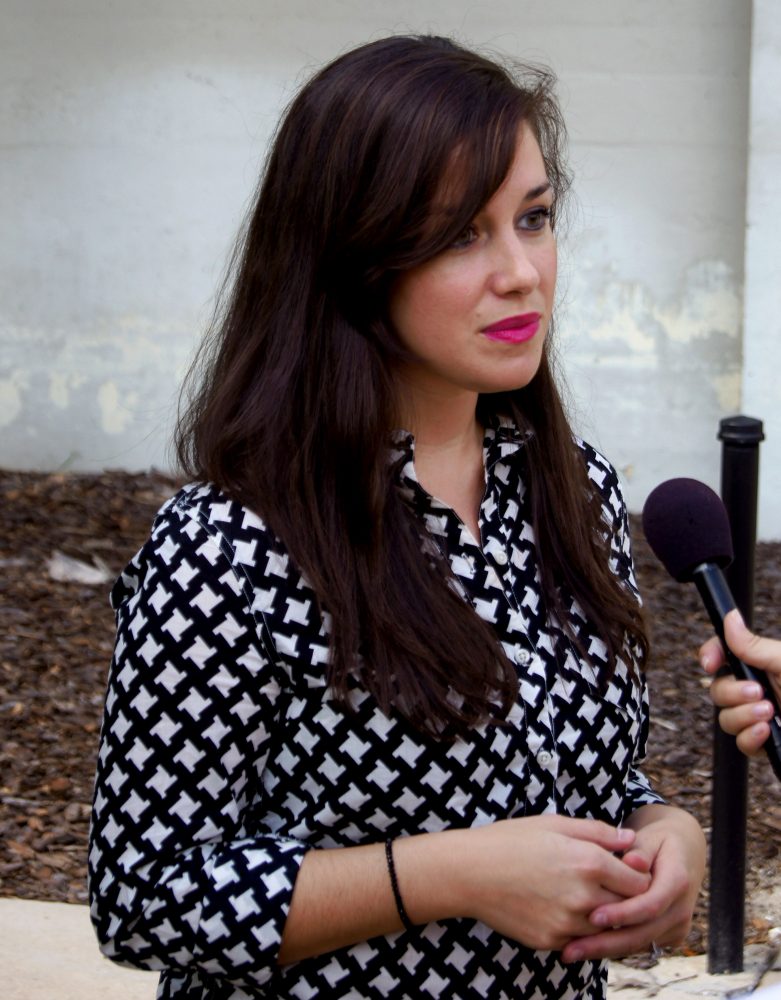 Executive Director for the Ocala Symphony Orchestra Pamela Calero, said she was looking forward to the forthcoming renovation. “That’s the fun thing about this building. Memories are being made, and we’re going to be a part of it.” 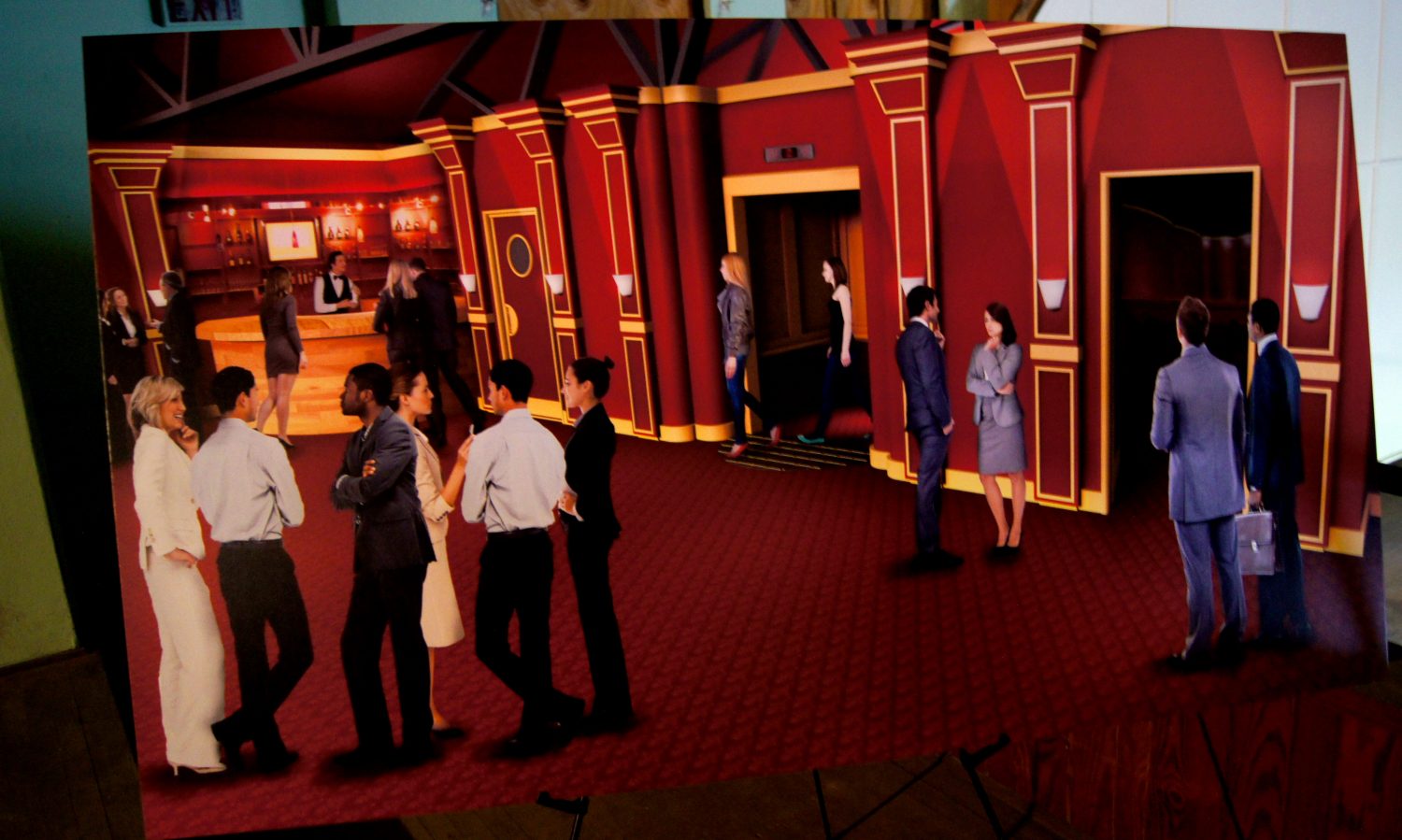 A rendition of what the final renovation will look like. In addition to a seating system that is projected to accommodate 650, Calero said, there are plans for a lounge complete with a fully stocked bar. 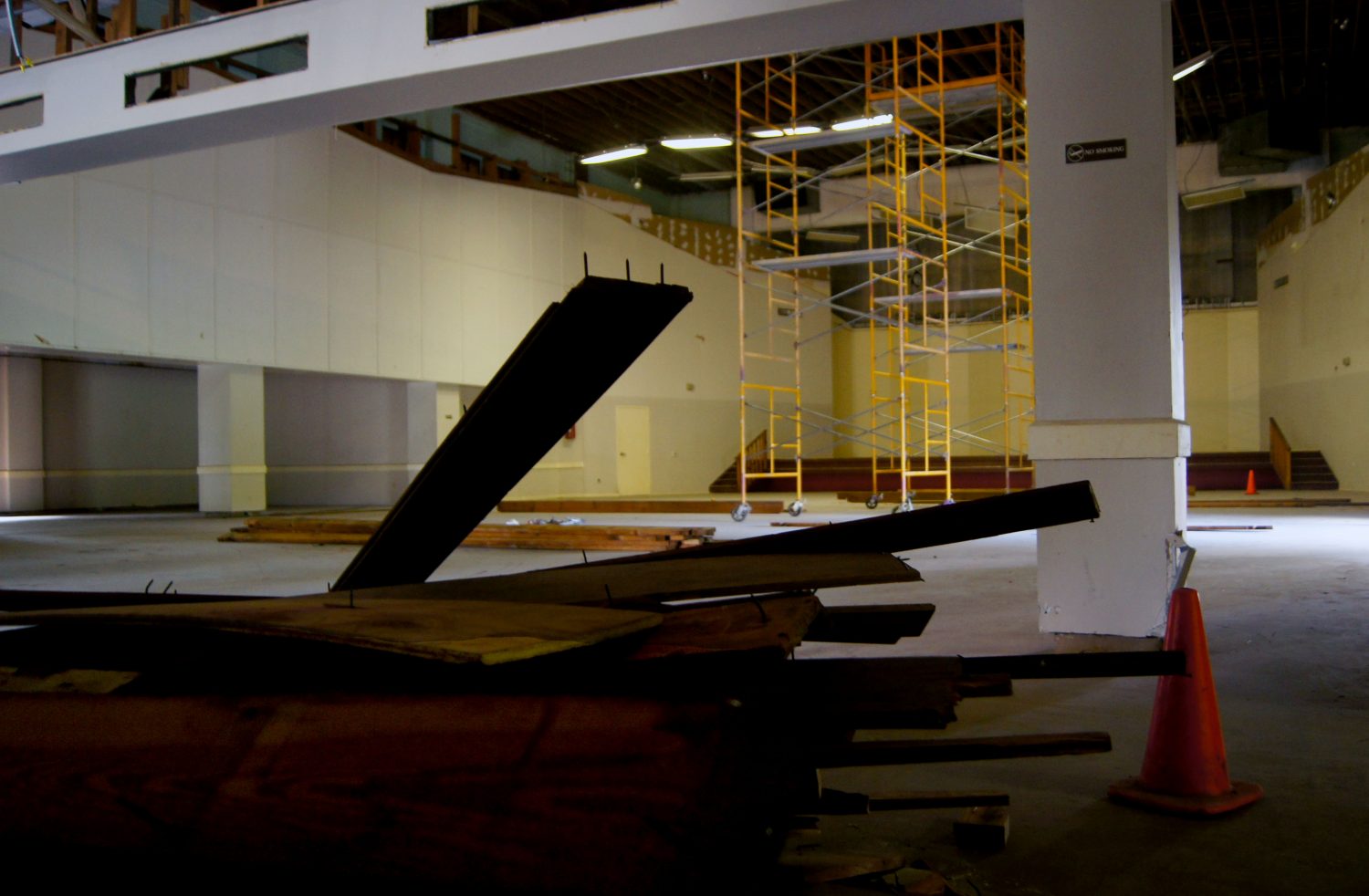 Though preliminary work has already begun on the Reilly Arts Center, Calero said full-scale construction will not break ground until September. 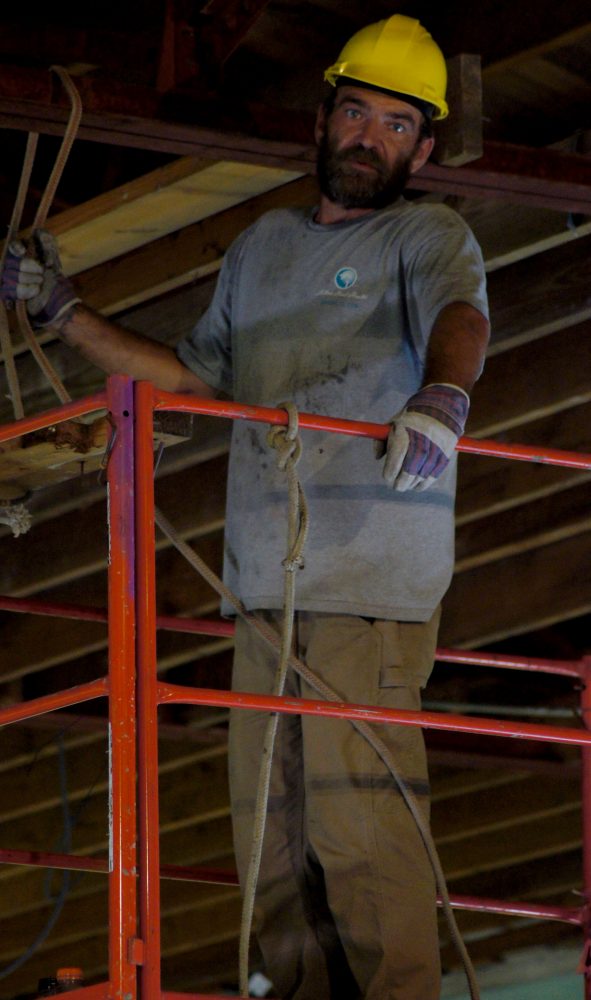 Perched from atop a towering scaffolding, Ted Allison, 40, uses ropes to ease down long wooden planks to the work crew waiting below. 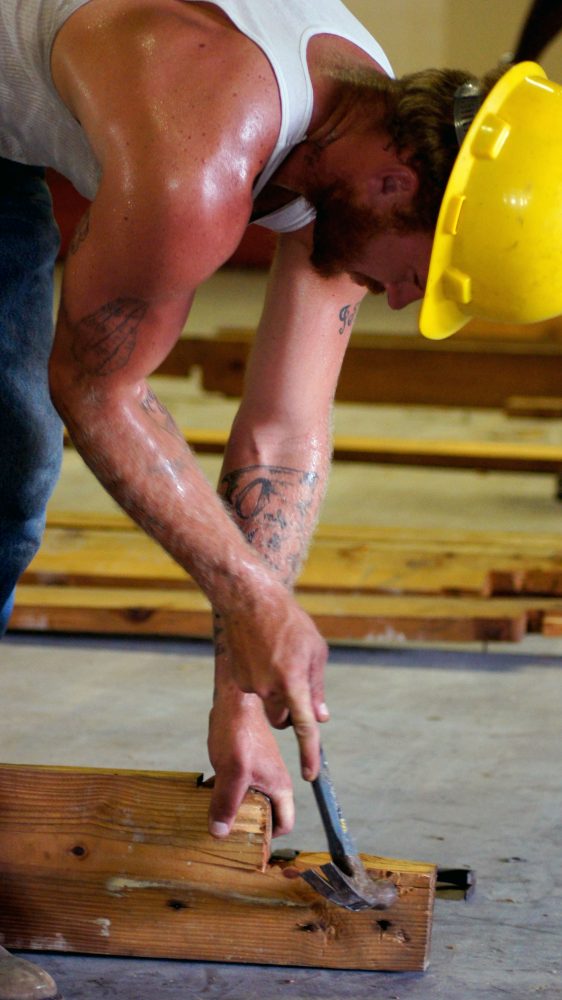 Once the wood is on the ground, Jeremy McCullough, 25, uses a crowbar and hammer to pry nails out of the planks. Afterward, the plank is thrown away.