When the Chicago district of the National Labor Relations Board ruled on March 26 that student-athletes at Northwestern University can be considered employees of the university and therefore unionize, debate sparked about the widespread implications of the decision.

Northwestern issued a statement with intent to appeal to the full NLRB in Washington, D.C. to address the potential of adopting the ruling at the national level. Terry Combs, Tampa’s district’s assistant to the regional director, said as a federal agency, judicial rule would take some time before any results become concrete, which could possibly take up to a year.

“Notwithstanding today’s decision, the SEC does not believe that full time students participating in intercollegiate athletics are employees of the universities they attend,” the email read.

“We will continue to actively pursue increased support for student-athletes by seeking to modify the NCAA governance process to permit changes that are fair to student-athletes and also consistent with what we believe are the appropriate principles of amateurism.”

Tyler Cardillo, a former member of the UF men’s track and field team, said he understands both sides of the ruling.

The 21-year-old UF biology junior said while the university does an excellent job of accommodating its athletes, balancing school with the demands of dedication 10 to 20 hours per week a sport is overwhelming.

“Being an athlete here was a lot,” he said. “It was something I chose to do, but it’s literally like a job.”

After his freshman year, Cardillo left the team to focus on schoolwork. He said he might have reconsidered his decision if compensation was available.

According to the NCAA, $2 billion in athletic scholarships are awarded annually to 126,000 student-athletes at Division I and II schools.

Marisa is a reporter who can be contacted by calling 352-392-6397 or emailing news@wuft.org.
Previous University of Florida Names Interim Law Dean
Next March 27, 2014: Afternoon News In 90 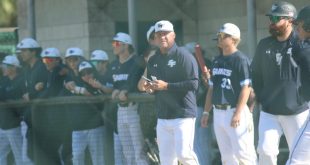