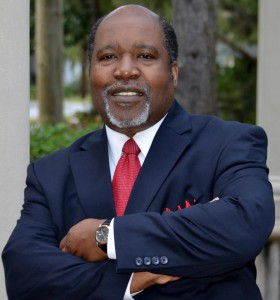 As the only candidate for Gainesville mayor who has lived in the city all his life, Scherwin Henry said he has a different perspective than the other five men running for the spot.

The stark contrast in prosperity he sees has inspired him to get involved in local politics.

On his campaign website, Henry writes that Gainesville is a “tale of two cities,” one that has experienced economic growth and a high quality of life and one that has not.

“We have families that are hurting, that are living in poverty,” he said, “and we need to really be aware as to how we will bring about opportunity for the families that aren’t living the quality of life that’s touted in Gainesville.”

Henry, 60, served two terms as District 1 City Commissioner from 2006 to 2012. In office, he supported development projects including expanding Butler Plaza, adding a Wal-Mart, providing housing in the Porters Community and Lincoln Park subdivision and building a library, a senior center and a new police station.

His mayoral campaign centers on improving local government’s relationship with residents, diversifying the city’s economy and making transportation easier for everyone.

One of his first priorities is increasing the city’s accountability and accessibility to residents. He said he wants to make sure residents feel welcome to speak during meetings and local officials hear and respond to their concerns.

“We as their representatives do care about what’s happening in their neighborhood,” he said.

To improve the local economy, Henry said, he wants to review city polices that hinder business development and expansion, work to diversify the city’s economic base and to recruit companies that pay employees a living wage.

“We really need to bring about a new way of thinking as far as recruiting companies that will bring jobs here for all sectors of employment,” he said.

Henry attended Santa Fe Community College and graduated from the University of Florida with a bachelor’s degree in food science. Now a senior biological scientist at UF’s Interdisciplinary Center for Biotechnology Research, he has worked in research positions at the university for the past 38 years.

Henry said he wants to expand the partnership between the city and UF, but to also make Gainesville more economically independent from the university.

Transportation is another issue important to Henry.

“If people who don’t have cars can’t travel to seek employment and gain employment, then they’re facing an uphill battle,” he said.

The city should make the bus system more accessible to all city residents, he said. He wants to revisit the transit tax that was voted down in November and focus on repairing roads.

As of March 1, Henry received about $9,100 in donations, putting him fourth among the six candidates in campaign contributions. He has spent about $4,700.

Alli is a reporter for WUFT News and can be contacted by calling 352-392-6397 or emailing news@wuft.org.
Previous Profile: Donald Shepherd Sr.
Next Sequester cuts to affect North Florida airports