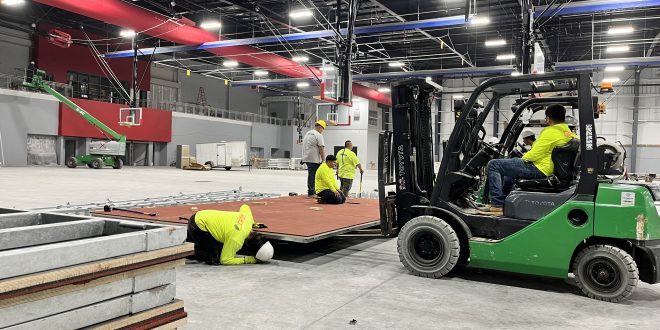 The Alachua County Sports and Events Center at Celebration Pointe will open on Jan. 13, 2023, for the Jimmy Carnes Indoor Track and Field Invitational.

The center will remain temporarily open through the track season for several tournaments and will close in mid-February to finish the facility’s multipurpose flooring. It will have a grand opening in spring.

The 2016 renovation of the Stephen C. O’Connell Center removed the only indoor track in Alachua County and the surrounding area.

Alachua County Communications Director Mark Sexton said the Sports and Events Center will provide a home for track and field events in the county.

The multipurpose facility will have an indoor track, baseball batting cages, 13 basketball courts, 18 volleyball courts and 21 pickleball courts. The space can host a variety of indoor sports such as cheer, gymnastics, karate and judo. Additionally, the 130,000-square-foot facility can be converted for trade shows and conventions.

“It will be located at Celebration Pointe, but we want the economic benefits to spill out into the entire community,” said Sexton.

The facility cost $38 million and was primarily funded by the county’s Tourist Development Tax ($30 million), which is paid by visitors to Alachua County. The remaining $8 million was paid by Viking Inc. ($5.7 million) and the state of Florida ($2.3 million).

“The good news for local residents is that their property and sales tax dollars are not what is building this facility,” said Sexton. “It’s being built by the people that come and enjoy Alachua County.”

The Sports and Events Center is expected to bring in $77 million per year and create over 1,100 jobs. It is expected to generate $12 million in hotel spending and draw business to surrounding restaurants and stores.

“Locating the center at Celebration Pointe was an obvious choice because of its proximity to I-75 and to restaurants, hotels and attractions,” he said.

Rudy Mraovich, general manager of the restaurant MidiCi, said he is excited about the Sports and Events Center.

“It is going to be a really positive thing,” said Mraovich. “I think it’ll be great for the area and Celebration Pointe. Anytime you can get more foot traffic up here, it’ll help everybody.”

The construction began in September 2021 and will be completely finished in May 2023. RAADSports was contracted to design and operate the Sports and Events Center.

The center hopes to attract regional, national and international athletes. It will be used as both a training and competition space, said President and CEO of RAADSports Richard Blalock.

“We anticipate having Olympians come in to train,” he said. “We want to be internationally known for the different activities we have.”