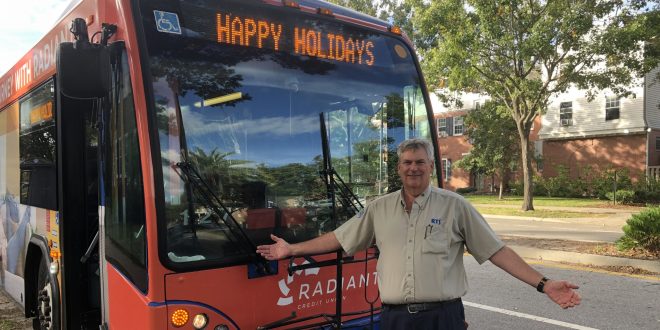 For one Gainesville bus driver, it’s the holiday season year-round.

January through December, Steven Sowders displays “happy holidays” on his bus header to celebrate a national holiday, big or small, every day.

Sowders has worked for the Gainesville Regional Transit System for nearly eight years. For most of that time, he has picked his favorite holiday daily, like National Pepperoni Pizza Day, and wishes passengers on route 127 happy holidays as they step off the bus. “I figured it was a good way to cheer people up,” Sowders said.

He got the idea by listening to the radio, where an announcer would occasionally shout out daily holidays.  It took him a while to remember to look up the holidays every day, but it has since become a habit.

“Happy Homemade Bread Day!” Sowders said Thursday as Andressa Freitas, a Gainesville resident and former University of Florida student, got off the bus.

“He is really friendly,” said Freitas.  “He always has this positive energy around him.”

In addition to cheering up riders, Sowders always tries to be kind to his passengers and make personal connections with them.

He has conversations with passengers like Veronica Nocera, a junior at UF, who has been riding the 127 for about a year. He has even received formal compliments from riders via comment cards drivers can pass out.

“I feel like he recognizes me,” said Nocera. “Maybe he doesn’t, but it feels nice to know that he might.”

Sowders even learns the holidays in sign language for a deaf passenger.

“She usually laughs at me when I tell her,” he said. Then, she gets off the bus and thanks him.

For some, however, the Sowders’ cheerful season’s greetings is not reason enough to take the bus.

Neha Dakshit, another UF student, noted that the bus stops for long periods of time at one bus stop.

“At that point, I just walk home,” she said.

Sowders does this in order to stay on schedule, he said on Apple Cider Day, which was Nov. 18.  It is a very common practice for bus drivers, as they are told it is better to run a little late than to be early and cause people to miss the bus.

Before starting with RTS, Sowders worked as a nurse on and off for 30 years. When he worked night shifts, he would say “good morning,” upon arriving in the afternoon, always making his coworkers laugh. Between nursing jobs, he drove a school bus.

He moved from Naples to Lake Butler with his family, and shortly after, he began driving for RTS.  He makes it a point to say “good morning” to everyone as they board his bus, no matter the time of day.

Emma is a reporter for WUFT News who can be reached by calling 352-392-6397 or emailing news@wuft.org.
Previous Artwalk Gainesville creates a monthly sanctuary for both expression and community
Next Charges against Jalen Kitna spotlight the problem of child pornography in Florida, nationally