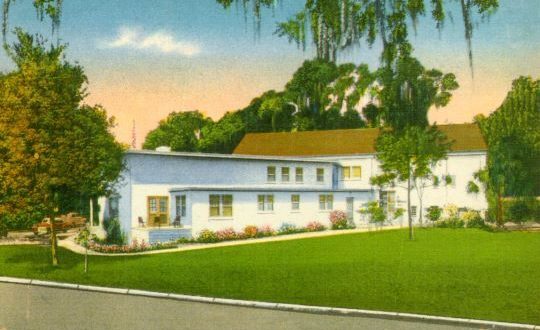 The historic Thelma A. Boltin Center was built in 1946 as part of FDR’s New Deal Initiative. "It definitely has historical significance as a building,” said Kathleen Pagan, the staff liaison for the Alachua County Historical Commission.

The historic Thelma A. Boltin Center, a once bustling entertainment space for Gainesville residents, now lies silent as the building slowly succumbs to the trials of time.

Located at 516 NE 2nd Ave. and built in 1943 as part of Franklin D. Roosevelt’s New Deal initiative, the community center has a rich history, but it’s falling apart. Delayed renovation plans, pandemic shutdowns and out-of-date construction techniques have the city at odds over the future of the center.

“A lot of effort has been put forth to try to figure out, you know, what should happen at this location, what is in the best interest for the city of Gainesville,” said Betsy Waite, the Wild Spaces and Public Places director for the city.

Originally used as an event space for the United Service Organizations and named after the center’s director Thelma A. Boltin, the center historically hosted entertainment events for service members of the U.S. Air Force. After the city purchased it in 1946, Rock and Roll Hall of Fame members such as Stephen Stills, Don Felder and Bernie Leadon performed at Friday night dances for the community.

“Tom Petty actually attended these dances while he was growing up,” said Kathleen Pagan, the staff liaison for the Alachua County Historical Commission. “It definitely has historical significance as a building.”

Historic buildings, however, require upkeep. Its last renovation was in 2000, and in 2019, the Gainesville City Commission approved plans for a comprehensive renovation of the center. Then, in March 2020, the building shuttered its doors as part of the pandemic shutdowns, pushing the timeline for the renovation plans back.

The building fell into further disrepair and in December 2020, when a portion of the roof above the auditorium collapsed.

The structural engineering firm hired to assess the viability of the building conducted an extensive investigation into the building’s integrity. Waite said the report, in addition to finding extensive termite damage, cited undersized footers and subpar building materials used in the original construction of the 1940’s building as “elements that kind of contributed to the failure of the building.”

Their final report, issued in November of 2021, left the city with two options: demolish the structure or do extensive renovation to keep it standing.

City residents disagree on the community center’s fate. Proponents of demolition argue that a renovation would be too costly and a new design could make the space more efficient and functional for residents while staying true to its historical roots.

“It doesn’t take away from its value, changing the building,” said Gainesville resident Ethan Cocky. “The area is still significant even though the building is different.”

Demolishing the building and establishing a new structure would cost an estimated $3 million, financed by money from the city’s portion of the Wild Spaces and Public Places tax revenue, a half-cent sales tax collected throughout Alachua County designated for improving existing public works and building new ones. The proposed plans by REG Architects would cost about $4.5 million to $6 million.

Some residents think the notion of historic preservation is worth the higher cost. Many sites in Gainesville have undergone historic renovations with success in the past and kept old structures preserved in a functional state.

“I think Gainesville has this really rich history that a lot of people don’t know about,” said Gainesville native Adriana Ruiz. “If we have the chance now to restore centers like these and take advantage to highlight these communities and the history, I definitely like that idea.”

As the center is listed on the national register of Historic Buildings, the Historical Preservation Board would have to grant a Certificate of Appropriateness (COA) for demolition.

The board will meet again on Tuesday, where, according to a press release distributed by the city, “The board will discuss whether to approve or deny the request for demolition and for permission to construct a new building.”

Elise is a reporter for WUFT News who can be reached by calling 352-392-6397 or emailing news@wuft.org.
Previous A new Newberry Christmas tradition transforms its downtown into a gingerbread village
Next Gainesville homeless campers fear arrest, lack legal alternative