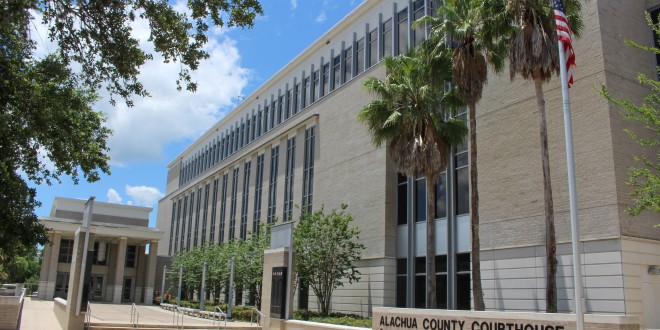 A Gainesville woman remains jailed Monday over allegations she doused gasoline on her girlfriend’s dog tied to a tree and set it on fire after they argued, court records showed. She sent a video of the dog burning out of spite to her girlfriend, police said.

Tequila Quashea Atkins, 37, of Ocala was arrested Saturday in lieu of a $50,000 bond on two felony charges of animal torture. The dog, who was seen whimpering and trying to flee while the gasoline burned, survived after a witness intervened and washed the gasoline off the dog and another who wasn’t set on fire. The dogs’ names are Duke and Buck.

Atkins fled the scene after the incident on Thursday but was arrested and jailed Saturday, court records show. The dogs were removed by animal services and treated by a local veterinarian, police spokesman David Chudzik said.

Police said Atkins had been living in a wooded area off East University Avenue near Northeast Waldo Road. She had been staying with her girlfriend, with whom she had been in a relationship for a year, in a tent and camper, according to court records.

After an argument, the girlfriend walked away from Atkins to keep the argument from escalating, leaving her dogs with Atkins, according to police.

Atkins poured gasoline on both dogs, set fire to Duke, burning the dog severely in the process, police said. While Duke was on fire, Atkins took a video of the incident that showed the dog in pain, police said, and sent the video to her girlfriend.

McCallister Walker, a bystander to the scene, said when he heard the commotion he intervened and put out the fire with water and a wet blanket. Walker said he has previously watched Duke and Buck for Atkins’ girlfriend.

Police at the scene watched the video and confirmed it was authentic, court records said.

Bryce is a reporter for WUFT News who can be reached by calling 352-392-6397 or emailing news@wuft.org.
Previous Gainesville commissioners vote to allow sex offenders to live closer to schools, day cares and parks
Next Longboarding and skateboarding competition challenges competitors at Boulware Springs Park

With the internet growing and expanding at a rapid pace, the exploitation of children on …