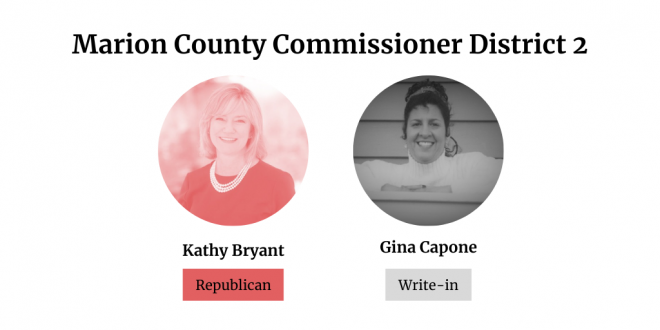 Write-in candidate Gina Capone is challenging incumbent Kathy Bryant in the Marion County Commission District 2 race. Here is what voters need to know about the candidates as they prepare for Election Day on Nov. 8.

Capone, 64, is a Virginia native who grew up in Annandale, Virginia, which is outside of Washington, D.C., and moved to Ocala in July 2021. She attended Northern Virginia Community College, Virginia Tech and Skidmore College for her undergraduate education and has a master’s degree in English from Salisbury University.

She has owned numerous businesses. She was a part owner of the Potomac Horse Center and owned a horse riding school called the Dressage Centre, which she closed in 1998. Capone started an informational business completing title work for real estate clients and currently works in this field.

Capone is also a writer who has three of her own publications – Ocala Florida News, Wellington Florida News and Gina Life News.

She is a non-affiliated voter and candidate and wants to change the way people vote, she said.

“I feel like there’s a political machine,” Capone said. “I’m not part of it because I don’t want to be.”

She is encouraging people to vote for the person with “a pure heart not by being a politician but by serving the people.”

She has a high school diploma, and after she graduated she started a career owning different small businesses. Bryant and her husband currently own Aire Supply, LLC in Ocala, which is a heating and air conditioning equipment distribution company.

“We were one of the hardest hit counties in the state of Florida in the Great Recession,” Bryant said. “When I ran in 2010, I ran on diversifying our economic base.”

She calls herself the “common sense conservation” because when she makes a decision she uses a common sense approach, and she is a Republican, she said.

“I look at the financial impacts of a decision and evaluate it meticulously,” she said.

Some of her accomplishments during her time as commissioner include investing in the creation of distribution centers in Ocala for companies like FedEx, which opened in 2016, and Chewy, which opened in 2014, and giving first responders a salary increase because of the decline of workers in the field.

While Capone has a long list of issues she wants to tackle as a commissioner, one of them is specifically aimed at Bryant.

She wants to establish term limits and referendums, she said. This will allow for the residents of the county to have more of a say in decisions made, Capone said.

But most of her issues revolve around development. She is passionate about conserving the land in the county, she said.

“People come through here because they love the trees, rivers, canoeing and lakes,” she said. “But they’re all filthy.”

If elected, Capone wants to limit new development within boundaries that don’t encroach onto land for farming and agriculture, she said.

Bill Heller, a resident of Ocala, said he used a mail-in ballot to vote for Capone because of her stance on development. Heller, 76, is on the county’s planning and zoning board. The current commissioners are overdeveloping the community and not taking care of the interest of the people, he said.

“I just think they’re out of touch,” he said. “I think money is influencing their decisions.”

Bryant said she is also focusing on urban growth being within boundaries, but growth is inevitable.

“It doesn’t have to destroy a community if it’s done in the right way,” Bryant said.

She acknowledged that improvements could be made, and the commission is focused on maintaining boundaries for development. The commission is committed to making sure there is not huge growth within the Ocala National Forest, she said.

“I think it is vitally important that we do maintain our farmland preservation area so that we’re able to maintain our identity,” Bryant said.

Bill White, the mayor of Dunnellon, said he hopes the candidate who is elected finds a balance between creating development and preserving natural resources.

Dunnellon is a small city with just over 2,000 people, so there is a small tax base. But, many people use the city’s resources like the police, roads and rivers, White said. He hopes the next commissioner can get more funds for the city through grants, he said.

“The roads and sewers are in really desperate need of attention,” he said. But the city has a limited amount of funds to spend as the area continues to grow.

If elected, Bryant wants to make sure taxpayer dollars are being used in a responsible way for the upkeep of roads, parks, libraries, transportation and other basic services residents expect to have, she said.

Ocala Mayor Kent Guinn said the main issue facing the city is dealing with development. Bryant has been dealing with a lot of growth with more people moving into the county and having to create new roads and more services for residents, he said.

There is a stark contrast between Capone’s and Bryant’s campaign fundraising.

Capone has donated most of the money she has raised herself in the form of in-kind contributions for things like gas, a constituent luncheon and a campaign finance dinner.

What to expect in this race

Kathy Bryant has a large, supportive following and is projected to win the election. A Republican has held the seat since 2006, according to the Supervisor of Elections website for Marion County.

Capone will face an uphill battle to gain votes. If residents want to vote for her, they will have to write in her name on the ballot for the vote to count.

Residents of the county can vote for any commissioner regardless of the  district they represent.

Alexa is a reporter for WUFT News who can be reached by calling 352-392-6397 or emailing news@wuft.org.
Previous UF Faculty Senate approves vote of no confidence in presidential selection process
Next The Point, Oct. 27, 2022: Alachua NAACP wants to pursue legal action for ‘deceptive’ political ads