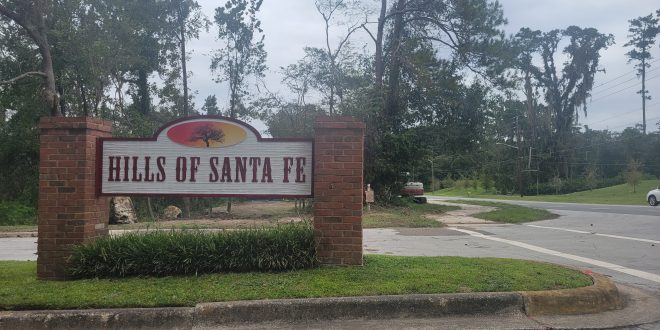 GAINESVILLE, Fla. – When Hurricane Ian was originally projected to make landfall around the Tampa Bay area and rampage up the center of Florida near Gainesville, the residents of Hills of Santa Fe held their breath.

In a community with a long history of severe flooding – one that is still recovering from its last major flood only a month prior – homeowners prepared for the worst.

“My family was in full panic mode,” said homeowner Jorge Arango, 34, who flew in from out of state just days before the storm to prepare.

Arango and his family know firsthand the risk of flooding after their house was inundated with three feet of water last year. He moved anything of value into the attic and piled sandbags around the windows and doors until the house resembled an army barracks. He and his family raised everything in the house three feet off the floor, he said.

And then the storm changed course, heading northeast near Orlando and out into the Atlantic Ocean. Making landfall as a Category 4 storm near Fort Myers and Cape Coral before heading northeast, Hurricane Ian largely spared Gainesville of extreme damage.

“It was nothing worse than an afternoon storm,” resident Paul Misleh, 71, said.

While the extent of Hurricane Ian’s impact on Gainesville was consistent rainfall Wednesday, the precipitation levels amounted to less than an inch of rain, according to the National Weather Service.

“We were surprised,” said homeowner Luisa Peña, 56. “There was fortunately no flooding or damage at all.”

On the Thursday after the storm, residents of Hills of Santa Fe went on afternoon strolls in the brisk air left behind by Hurricane Ian. The streets were littered with leaves and debris, and occasionally a felled tree branch. Residents began to return their lawn furniture outdoors. This was a best-case scenario for a neighborhood haunted by flooding.

Caputa, a former Hills of Santa Fe resident, lost her home during Hurricane Elsa last year. She now lives at Broadmoor, a mile south of her old neighborhood. She said she knows the plight that many Hills of Santa Fe homeowners have endured for decades as a result of flooding.

For years during heavy storms, Hills of Santa Fe has received the runoff from the higher elevated Ellis Park and is especially susceptible to flooding when that subdivision’s retention ponds overflow. Based on previous experiences, Hurricane Ian could have been disastrous, she said.

Before she lost her house, Caputa was a part of a local organization called the Flooding Action Committee. Its mission was to advocate for flood remediation projects in high-risk neighborhoods like Hills of Santa Fe and Robin Lane. The committee frequently met with the Alachua County Board of Commissioners, and it pleaded for aid after hurricanes Irma and Elsa decimated the low-lying communities of western Gainesville.

In 2021, the county installed stormwater pumps at Hills of Santa Fe. In late August this year, after a week of heavy rainfall and intense flooding, the neighborhood survived its first major test, though residents still reported property damage.

During the week before Hurricane Ian, the county erected a levee made of mud along Northwest 23rd Avenue and Northwest 98th Street to prevent water from overflowing retention ponds into Hills of Santa Fe and neighboring Meadowbrook.

“These are just stop-gap measures,” Caputa said, “but this commission is much more forward-thinking than the last.”

Caputa said that the pumps are a step in the right direction. But if the Hills of Santa Fe is going to endure more natural disasters in the future, more needs to be done. In the case of Hurricane Ian, because of the lack of rain, the pumps were hardly needed.

“It was not a good test of the steps the county has taken to resolve our issues,” said homeowner Jan Bragdon, 75.

Bragdon, who bought her house in 2007 and, like many of her neighbors, was not told she needed flood insurance, has seen more than one 100-year flood. For the moment, she hopes she doesn’t see another test of the county’s efforts.

Many residents like Bragdon said they are simply relieved to have evaded another catastrophe.

“Sure, I’m thankful we didn’t get flooded again,” Caputa said. “But what’s sad is that our good luck means that others in the storm’s path are hurting.”

Jack is a reporter for WUFT News who can be reached by calling 352-392-6397 or emailing news@wuft.org.
Previous Live updates from NPR News: Up to 21 people are dead in Florida as Hurricane Ian bears down on South Carolina
Next ‘Complicated and complex recovery’ lies ahead for Southwest Florida, FEMA administrator says