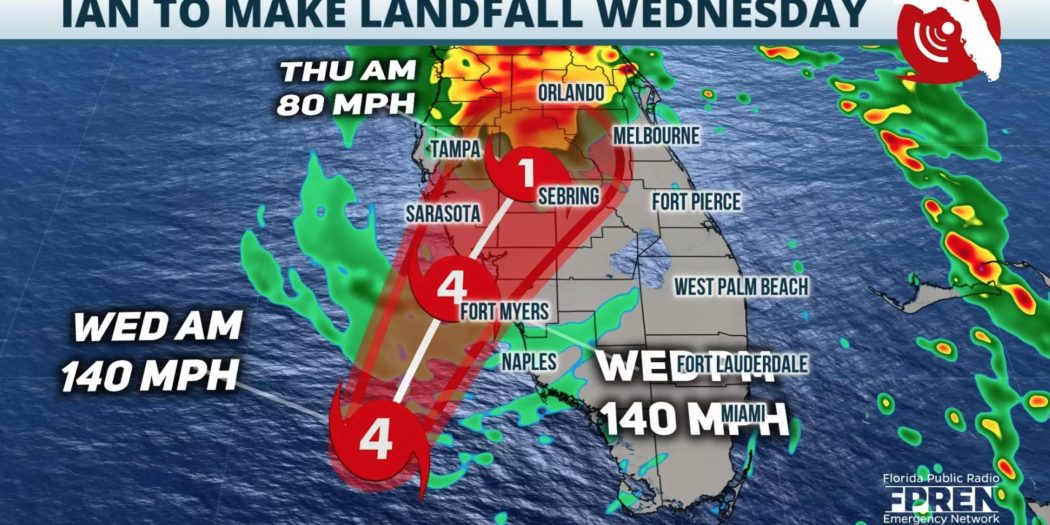 Ian is forecast to bring life-threatening storm surge, flooding rains, strong winds, and even the risk of tornadoes as it makes landfall along the Gulf Coast Wednesday.

The early morning update from the National Hurricane Center continues to show a very strong Hurricane Ian off the Gulf Coast of Florida, with a landfall expected to occur during the late morning or early afternoon hours Wednesday. Much of the Peninsula is under tropical alerts, with storm surge and flooding expected to make for dangerous conditions across the state through Wednesday and Thursday.

A significant storm surge threat exists across the state as Ian makes its way toward landfall. A Storm Surge Warning is in effect for Tampa Bay, the Lower Florida Keys from Big Pine Key to Key West, the Dry Tortugas, the mouth of the St. Mary’s River along the Flagler and Volusia County line, the St. John’s River, and the Suwannee River southward to Flamingo. These areas are most at risk to life-threatening inundation from rising water moving inland from the coastline. The storm surge is expected to peak at between 8 and 12 feet from the middle of Longboat Key to Bonita Beach, with areas south of Bonita Beach to Chokoloskee forecast to experience a 6 to 10 foot storm surge. While the storm surge risk has decreased somewhat across Tampa Bay from previous forecasts, an estimated 4 to 6 feet of inundation will cause areas of normally dry ground to be covered in salt-water flooding. Since the risk of storm surge is so prominent with Hurricane Ian, residents are encouraged to heed all evacuation orders that are issued.

Storm surge flooding is forecast to be exacerbated by flooding from heavy rainfall, with the Weather Prediction Center placing a high risk for flash flooding from Daytona Beach to Orlando and Tampa on Wednesday. The risk for flooding is forecast to expand by Thursday, likely including places like Jacksonville and Gainesville. Rainfall from Hurricane Ian is expected to be highest from Jacksonville to Orlando, extending southwestward toward Tampa and Fort Myers. Rainfall estimates in these areas of between 10 and 20 inches are expected, with locally higher amounts possible.

As with any landfalling tropical cyclone, the risk for tornadoes will be present through the day Wednesday. An “enhanced” risk for tornadoes is expected along the Space Coast Wednesday. This designation is a level 3 on a 1-to-5 severe weather scale and simply means that more numerous tornadoes are possible. A number of tornado warnings were issued across South Florida on Tuesday, and that is expected to be repeated farther north as Ian makes landfall and slowly pushes northeastward. Please be aware that tornado warnings during landfalling hurricanes do not typically have a lot of lead time. When a tornado warning is issued, residents are encouraged to seek shelter immediately in the lowest level of their home, placing as many walls between themselves and the outside as possible.

Hurricane Ian is a very large system, spanning hundreds of miles of real estate across the southeastern Gulf of Mexico. This event is forecast to be a long duration one, so residents are encouraged to exercise extreme caution when traveling in the days to come.

Previous World Equestrian Center provides free shelter to 3,000 horses ahead of Hurricane Ian
Next The Point, Sept. 28, 2022: What Floridians should expect as Hurricane Ian makes landfall