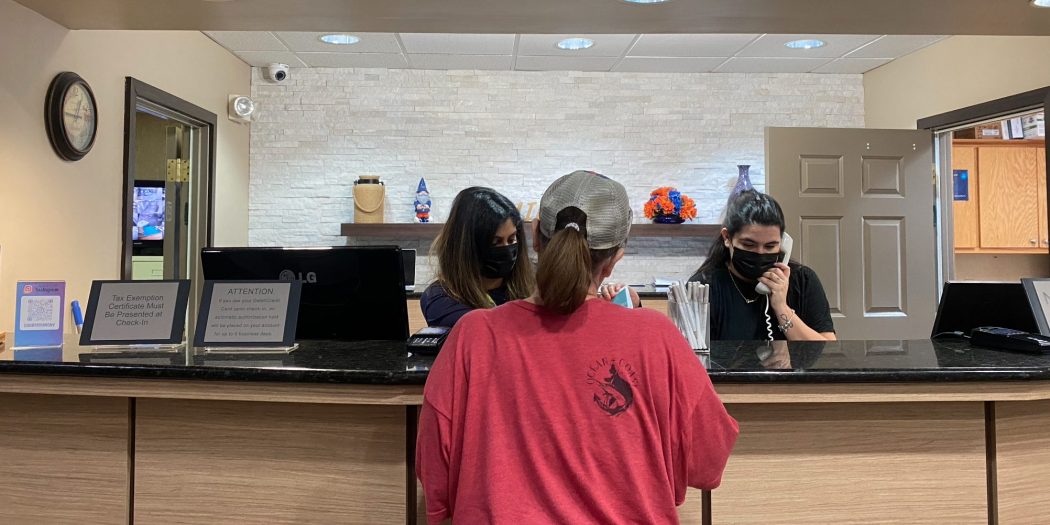 Anisha Patel and Frances Oliva check Regina Davis, 51, into her room at Country Inn and Suites. Davis evacuated her residence in Crystal River, which sits close to the water. (Averi Kremposky/WUFT News)

Weather forecasters are warning Florida residents that the hurricane looming eerily on the state’s west coast has the potential for a life-threatening storm surge, devastating wind damage and considerable flooding.

Many residents are not willing to stay home and see if those forecasts turn into reality.

And numerous evacuees are seeking refuge in Gainesville, a city that lies both inland and further away from Ian’s projected path.

Anisha Patel, the general manager at Country Inn and Suites near Celebration Pointe, is no rookie when it comes to hurricane season. During her 10 years at this property, Patel has dealt with multiple hurricanes.

The approaching storm is triggering high quantities of both cancelations and bookings according to Patel. Many hotels in the area were previously booked for Florida’s Saturday football game against Eastern Washington and the university’s conjoining family weekend. While the football game was rescheduled for Sunday at noon, the school has canceled family weekend.

Even with the cancelations, Patel said space at Country Inn and Suites was limited. A lot of the rooms were booked by power companies preparing their crews for the aftermath of the storm.

“Some of them have already booked for days in advance,” said Patel, explaining the crews are taking rooms close to where they will be deployed to handle post-storm damage.

In preparation for the loss of power, the hotel stocked up on items like granola bars, water bottles and other non-perishable items. In past storms, Patel spent more than three hours in line at McDonald’s getting food for her staff.

“This year our plan was to get maybe some frozen Lean Cuisines or something like that,” Patel said. “Again, more non-perishable foods and items so that nobody goes hungry and we can make it through and weather through the storm.”

Even though weekend cancelations have been creating vacancies for west coast evacuees, the high turnover rate is keeping hotel staff members overwhelmed.

Further west at Holiday Inn Express and Suites, Rich and Paula Mazur were lingering in the lobby while waiting for their 3 p.m. check-in time. They traveled to Gainesville from New Port Richey on Tuesday morning.

Mr. Mazur, a former volunteer fireman, recollected the days he spent in New Jersey completing back-to-back snowstorm rescues. In a time of unpredictability, the evacuation was symbolic of regaining some control.

“I’d rather get out of town when I can make the decisions than have someone come knock on the door and say ‘go to public school number 24,’” Mazur said.

The couple initially planned on riding out the storm in Ocala, but Mrs. Mazur said the availability of rooms was close to nothing. The next city they deemed safe was Gainesville.

Mrs. Mazur found an open room behind Archer, but not without some patience.

“I was on hold for a long time — 15 minutes — but I knew because people were trying to get out of town I would be waiting that long,” Mazur said. “It was no problem. I walked around and did laundry or whatever.”

Across Archer and near Interstate 75, the bustle at Springhill Suites was beginning to dissipate. The hotel’s sales manager, Heather Cronin, said it’s because they were starting to turn people away.

Similar to Country Inn and Suites, Cronin said their rooms were currently housing first responders, news crews and an abundance of evacuees from places like Tampa and Clearwater. Even though the hotel is full for the foreseeable future, she is hopeful that cancelations related to the football game will free space for other evacuees in coming days.

“At this point, we’re kinda like it’s slowing down a bit because we’re just having to tell people that we don’t have anything available,” Cronin said.

Even though the hotel is packed, the staff is experienced in handling the high volume of guests. According to Cronin, their rooms almost always sell out on game days. She also said that the staff has been properly trained in various safety protocols and is adequately prepared to handle the loss of power.

Averi is a reporter for WUFT News who can be reached by calling 352-392-6397 or emailing news@wuft.org.
Previous Man mauled by police K-9 pleads not guilty to felony charges related to traffic stop that turned violent
Next World Equestrian Center provides free shelter to 3,000 horses ahead of Hurricane Ian