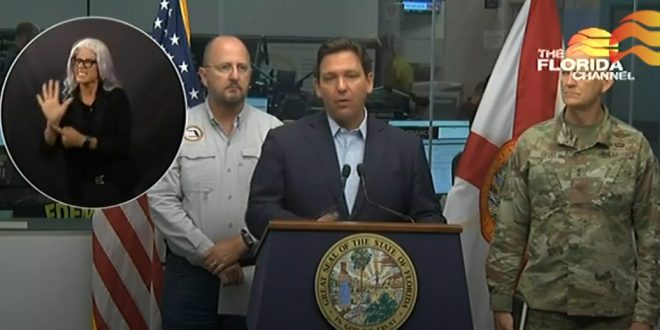 Gov. Ron DeSantis on Monday morning gave an update on the path of Hurricane Ian. (Courtesy of Florida Channel)

With Hurricane Ian churning toward the west coast of Florida, Gov. Ron DeSantis held a press conference on Monday morning in Tallahassee where he urged the public to stay calm and laid out the state’s efforts to assist the population.

As of 11 a.m. Monday, the storm’s location is roughly 375 miles south of Key West, moving northwest at a speed of around 13 mph, according to the National Hurricane Center. Maximum sustained winds for the storm are about 80 mph.

DeSantis urged the public not to panic buy fuel or water, and said the state has been in contact with major retailers like Publix and Walmart, which are constantly resupplying their shelves.

The storm is expected to become a Category 3 or greater hurricane as it strengthens in the Gulf of Mexico, forecasters said.

Currently, the diameter of the hurricane is around 500 miles. Hurricane Ian is expected to make landfall in Levy County, but DeSantis emphasized that, because of the hurricane’s size, the impacts of the storm would be much broader than its current projection, with places like Collier County in southwest Florida issuing voluntary evacuations for some coastal communities as it concerns potential storm surges.

Hillsborough County has issued a mandatory evacuation order that will be in effect at 2 p.m. Monday.

A tropical storm warning has been issued for the Lower Keys, according to the National Weather Service. DeSantis said storm surge watches have been implemented from Pinellas County all the way down to the Florida Keys. DeSantis said the watches are anticipated to become warnings later today.

Tropical storm watches have been implemented from Englewood south to Naples, with hurricane watches set for the Tampa Bay area.

DeSantis said Floridians should expect heavy rains, strong winds, flash flooding, storm surges and isolated tornado activity across the Gulf Coast. He said residents up and down the Gulf Coast should feel the effect of the hurricane 36 hours before it makes landfall.

DeSantis said the Florida Department of Transportation has suspended tolls at facilities and roads in the Tampa Bay area as well as roads and bridges in the Panhandle like Mid-Bay Bridge, Spence Parkway and Garcon Point Bridge. DeSantis said toll suspensions for other roads and bridges are being considered as the hurricane’s course is tracked.

Kevin Guthrie, the director for the Florida Division of Emergency Management, said ports along the east and west coasts of Florida are still open to allow in fuel and supplies, but said he was strongly anticipating the Port of Tampa to shut down as the storm neared.

Weight and size requirements have been lifted for vehicles that are transporting fuel, emergency equipment, services, supplies and agricultural commodities such as citrus, according to the transportation department.

DeSantis cautioned about the current uncertainty of the storm, noting the projection could shift in the coming days.

While DeSantis said the state has been in contact with major utility companies in Florida and that workers are on standby, he said people in affected areas should be prepared for an interruption of their power supply.

DeSantis issued a State of Emergency declaration for the entire state on Sunday, freeing up additional funds to help with the response and aftermath. DeSantis said Florida’s National Guard has activated 5,000 guardsmen from the state as well as 2,000 guardsmen from other states to assist with efforts to help the public before and after the storm has passed. Search-and-rescue teams specialized in working in urban areas as well as the United States Coast Guard have been mobilized in the effort, too.

Bryce is a reporter for WUFT News who can be reached by calling 352-392-6397 or emailing news@wuft.org.
Previous Hour-by-hour updates: Florida begins recovery after Hurricane Ian
Next A Gainesville community tethered by frustration stands resilient against repeated flooding