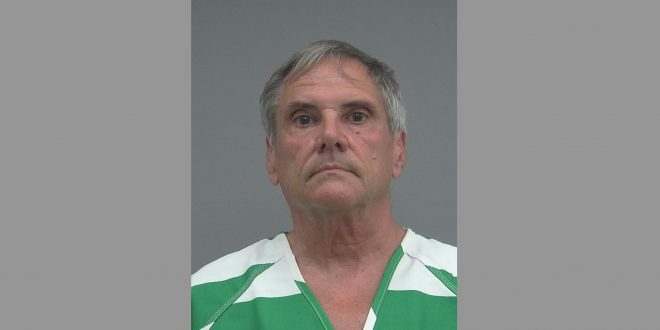 Police on Monday arrested Terry Lyle Martin-Back, 68, of Gainesville at his home outside the city limits on a felony intimidation complaint of sending a written threat to city commissioners. Gainesville Mayor Lauren Poe tweeted Tuesday about Martin-Back’s arrest, saying “how we communicate matters.” (Alachua County Jail)

A contractor and director at a real estate firm emailed city commissioners and said he hoped they would be assaulted over a controversial plan to allow construction of multifamily housing in residential neighborhoods, police said.

Police on Monday arrested Terry Lyle Martin-Back, 68, of Gainesville at his home outside the city limits on a felony intimidation complaint of sending a written threat to city commissioners. Gainesville Mayor Lauren Poe tweeted Tuesday about Martin-Back’s arrest, saying “how we communicate matters.”

“Our city is dynamic and will always be evolving and growing,” said Poe, a Democrat. “We can disagree on how to get there, but it is our responsibility to do so in a respectful and loving way.”

Court records cited police saying Martin-Back, also a Democrat, emailed city commissioners on Friday criticizing their support of inclusionary zoning. Under the plan, Gainesville would be the first city in Florida to allow construction of up to four residences on a single plot in residential neighborhoods as a way to make housing more available and suppress rental costs.

Critics of the plan objected that it would hurt property values for homeowners who bought in neighborhoods they believed would continue to be reserved for single-family homes, not duplexes or quad-plexes for transient renters. Public sentiment as expressed at city commission meetings has been overwhelmingly critical of the plan.

“I hope I’m first in line and my combat emotional stress kicks in, and I can take out all on your face,” Martin-Back wrote in his email, according to police. “I’m sick of you.”

“My hope after the election, when you are seen in public by the residents of Gainesville, they pull you out of whatever establishment you attend, and they beat your a** over your in-favor vote,” the email read, according to police.

Also on Friday, Martin-Back wrote on Facebook that he was going to lose control of his post-traumatic stress disorder, and if he sees the commissioners in public, he “won’t be able to control his actions,” according to the complaint. Martin-Back told police he was a combat Army veteran.

Reached by phone on Tuesday, Martin-Back said the statement about him hoping to be the person to “beat the commissioners a**” was not a threat.

“I am not threatening anybody, I’m just letting them know that the community is upset with what they have done or what they are going to be doing to our single-family zoning,” he said, adding that the zoning change would decrease the value of single-family homes.

“The information that was delivered from the commission was false,” Martin-Back said. “I only sent one email and only had one posting on my Facebook site.”

Poe wrote he and most commissioners knew Martin-Back. “I am empathetic of his mental health challenges caused by combat-related PTSD,” he wrote on Twitter. “I hope this ends with an opportunity for him to receive help.”

Martin-Back lives outside the city limits, so any such zoning plan by the commission would not affect his neighborhood. He told police the idea would affect his work as a general contractor for Exit Realty Producers of Gainesville, which still listed him as employed there on its website late Tuesday.

Martin-Back told police he realized that if he directly threatened commissioners, he could be charged with a felony, so he planned to “get in their face” after the next election.

“It’s really a threat to democracy,” he said.

Martin-Back was previously charged with aggravated assault 19 years ago, but he was not prosecuted, according to court records.

He posted a $75,000 bond and was released from the county jail, and the judge said he can not contact any of the city commissioners or own weapons or firearms, according to the court records.
___

Alexa is a reporter for WUFT News who can be reached by calling 352-392-6397 or emailing news@wuft.org.
Previous How increased demand for Florida housing impacts retirement communities
Next Florida blimp magnate pleads guilty to stealing nearly $8 million in US pandemic aid