Now, there’s a tool to help the public and decision-makers try and prevent that loss of life. Heat.gov launched July 26 as “one-stop hub” for timely, science-based information on health and heat. The site was launched as an effort by The National Integrated Heat Health Information System (NIHHIS), a collaboration between the Centers for Disease Control and Prevention (CDC), the National Oceanic and Atmospheric Administration (NOAA) and other domestic and international partners.

The launch comes as Florida experiences a record-breaking month of heat. Tampa takes the lead recording its hottest month on record ever, since recordkeeping began in 1890, averaging a high temperature of 93.4 degrees for July 2022. The city also recorded its hottest consecutive months, for June and July 2022. Orlando recorded broke its record for second-hottest month with July averaging a high of 94.5 degrees. Additionally, Vero Beach, Gainesville and Fort Myers all recorded their sixth-hottest months on record.

Though Florida is expected to be scorching during these months, the record-breaking heat has not been contained to our state. According to NOAA, June 2022 was the sixth-hottest month in recorded global history.

The newly launched tool will give users access to heat forecasts and heat advisories nationwide. There are a variety of heat mapping tools for both current and future weather.

The site also includes specified information for at-risk groups such as children, the elderly, athletes and first responders. And most importantly, the site is full of information on preparedness and response to extreme heat.

Melissa Feito is a multimedia producer for Florida Storms and the Florida Public Radio Emergency Network (FPREN). Reach her with questions, story ideas or feedback at mfeito2@ufl.edu.
Previous The Point, Aug. 2, 2022: Elopements from Florida nursing homes are rare, but extremely dangerous for those with dementia
Next The Point, Aug. 3, 2022: Site of Surfside condo collapse sold for $120 million 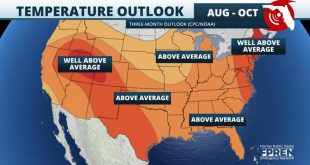