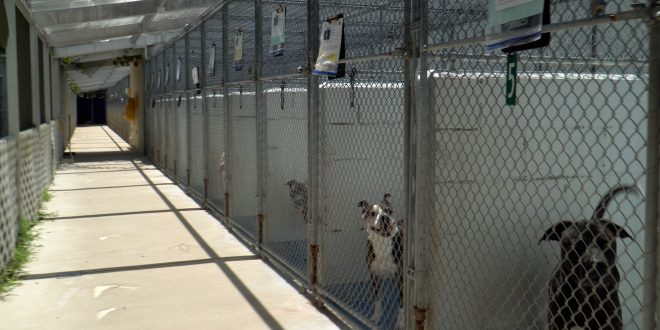 To alleviate overcrowding, the county instituted an emergency intake shutdown at the Animal Resources and Care shelter. (Mickenzie Hannon/WUFT News)

A three-month-old gray tabby cat named Dos sits in her kennel, waiting for someone to take her home. She hopes someone will foster her while she waits to undergo enucleation surgery to remove her eye. Dos is one of over 100 animals living at the overcrowded and understaffed Alachua County shelter.

The county in late June instituted an emergency intake shutdown at the shelter, located at 3400 NE 53rd Ave. The shelter is temporarily not accepting owner-surrenders or confiscations until the animal population aligns with the shelter’s capacity for care, the county shared in a press release.

It has announced ongoing free adoptions and an event on Friday and Saturday at the shelter to help alleviate the overcrowding.

Since January, the shelter has taken in a total of 1,291 animals with 276 animals entering the shelter in June. Of the total animal intake, 81% are strays, 11% are confiscated and about 4% are owner surrenders.

“We are trying hard to avoid having to use euthanasia as a way of reducing the population. We know that we don’t have to do that if we can get more pets out into the homes,” Deputy County Manager Carl Smart, who oversees the animal services department, said.

The county agreed to make improvements to the facility, including an exterior mural and covers to allow shade for dogs in outdoor kennels.

But Smart said they have outgrown that shelter, which was built in 1987 and cannot provide animals with proper care.

County Manager Michele Lieberman agreed. “It was built at a time when the policy was euthanasia,” she said at the meeting. “It was never built to house an animal more than a week.”

County Commissioner Ken Cornell said the commission is committed to building a new shelter, which would be two to three years away — time the shelter does not have.

Despite overcrowding, the shelter still accepted animals, which increased during spring and summer months due to the influx of animal births. Now, shelters are concerned with surrendered pets further increasing intake.

“Some people are having difficulty in taking care of basic needs in their home,” Smart said. “Part of those basic needs sometimes is providing food and care, sometimes veterinary care, for their pets.”

As a result, a lot of pet owners consider surrendering their pets because they cannot afford pet care or food, or they endure higher pet restrictions and additional fees when they seek affordable housing, said Nikki Healy, the acting Animal Resources and Care director.

“Housing has been an issue,” she said.

Cynda Crawford, a UF clinical associate professor in shelter medicine, serves as the director for Maddie’s Shelter Medicine Program that works with shelters to improve healthcare and welfare of animals. She suggested the county implement population management policies to balance between animals entering and leaving the shelter.

At the meeting, residents addressed issues of limited staff within the shelter, a problem the county said is occurring nationwide.

“It’s not just an Alachua County issue, it’s not just regional. It’s all over the state and the nation. A lot of animal shelters are having difficulty with overcrowding,” Smart said.

“We ran out volunteers. We’re going to end up running out staff,” she said.

In order to operate effectively, public commenters suggested an increase in staff, including kennel staff to walk and care for dogs, front desk staff and a communications director to answer and return phone calls.

Shelter staff urge residents to volunteer or foster an animal, as it helps socialize the animals and increase their comfortability around people.

Interested volunteers can apply online. After approval, volunteers attend a Zoom orientation and training at the shelter before they begin volunteering.

“They could come out to the shelter, even if it’s only for a couple hours, and walk the dogs, get them out of the crates, get them outside, let them exercise and have some fun,” Smart said.

Fostering allows animals to become accustomed to living in a home, Healy said.

“There are some great pets that are available at the shelter: dogs and cats that would make good pets in your home,” Smart said.

Mickinzie is a reporter for WUFT News who can be reached by calling 352-392-6397 or emailing news@wuft.org.
Previous The Point, July 20, 2022: Parkland school shooting trial continues as prosecutors seek death penalty
Next Gator athletes gain benefits for using their name, image and likeness 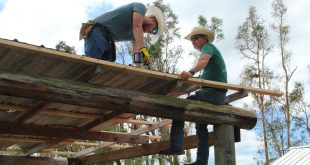