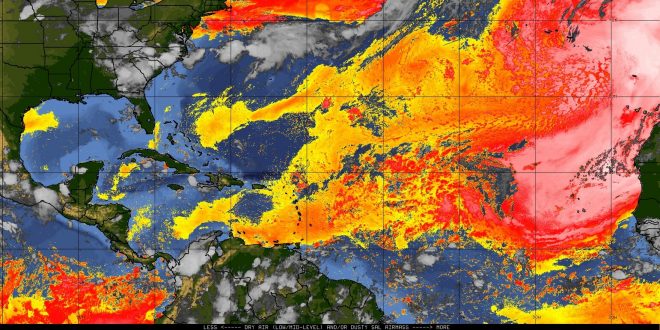 The Saharan Air Layer can easily be seen from space by looking at GOES-18 satellite imagery. Shades of yellow, orange and red indicate arid air coming from the Saharan Desert. (Courtesy of Cooperative Institute For Meteorological Satellite Studies, University Of Wisconsin-Madison)

More than a month has passed since the beginning of the Atlantic hurricane season and a hostile environment could briefly limit tropical development through mid-July.

The National Oceanic and Atmospheric Administration (NOAA) is forecasting its seventh consecutive above-average hurricane season this year in the Atlantic Basin. On average, the first-named system of the season is named by June 20th. Nearly two weeks ahead of schedule, Tropical Storm Alex developed just east of the Florida coast after dumping nearly a foot of rainfall on portions of South Florida as Potential Tropical Cyclone One. Nearly one month later on July 1st, Tropical Storm Bonnie developed in the southern Caribbean and made headlines for completing a rare crossover into the Pacific Basin. The third-named system of the season, Colin, became a tropical storm less than 24 hours later off the South Carolina coast. Based on the 1991 to 2020 climate period, Colin should have formed closer to early August and not early July. While the Atlantic may be off to a seemingly early start this year, it may not feel like it to some based on when the first-named system developed.

This year marks the first time since 2015 that a named tropical system did not form before the start of the Atlantic hurricane season. In fact, by early July 2021, hurricane watches were issued for the Nature Coast as Elsa eyed a Florida landfall. The record-shattering 2020 Atlantic hurricane season brought about the development of Tropical Storm Edouard during the 4th of July weekend. Over the next five days, the deceptively quiet tropical pattern is likely to continue. But why has activity in the Atlantic gone virtually silent?

In recent days, huge plumes of Saharan air have been ejected off the West African coast. The warm, arid environment of a Sahara Air Layer (SAL) is not a hospitable one for tropical development. Beginning in late June and lasting through mid-August, new surges of warm and dry air emerge from West Africa approximately every three to five days according to NOAA. Satellite technology allows meteorologists to detect the SAL and provides perspective as to how large these dry areas can be.

Some of the larger eruptions can span hundreds of miles across and be more than two miles deep. The SAL is typically found just above the more dense maritime layer near the ocean surface.

Dry air from the Saharan Desert will likely keep tropical activity at bay through mid-July, but it probably will not impact NOAA’s above-average forecast for the 2022 Atlantic hurricane season.

Starting in August, attention will turn to the area known as the Main Development Region. It is in this area of the tropical Atlantic where nearly 75 percent of all major hurricanes in the Atlantic develop. There is nearly 80 percent of the season remaining and the climatological peak of activity is still more than two months away.

Previous Prosecutor dismisses charge against Keyontae Johnson
Next The Point, July 8, 2022: Florida’s school grades were better than the state expected in 2021-22