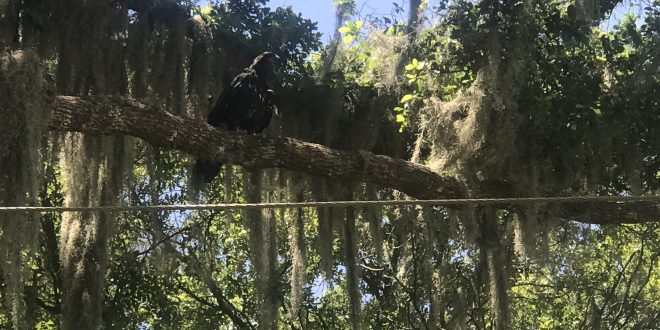 One of the released eagles perches on a tree branch on Thursday afternoon. (Elliot Tritto/WUFT News)

Mary Ellen Cross and Bubba and Ingrid Scales are volunteers for the Audubon EagleWatch Project. The watch is a part of the National Audubon Society Program, which trains volunteers to find bald eagles’ nests, collect the data and release eagles into the wild.

Cross has been a volunteer for five eagle nesting seasons and found out about the project in an advertisement in Gainesville. Because nesting seasons last from October to May, she said it’s essential for the project to prevent eagles from potential danger as they do fall out of the nest.

Bubba Scales said they have a lot of experience in releasing adult bald eagles, yet this is the first time they’ve gone to release young bald eagles.

Although neither was injured, they both fell out of their nests at a young age trying to fly and weren’t strong enough to care for themselves.

One bald eagle named Feisty Mike was found in late March near the Paynes Prairie Visitor Center. The other, unnamed, was found on the east side of Newnans Lake in late April. Both were then taken to the University of Florida College of Veterinary Medicine and then transferred to the Audubon Center for Birds of Prey in Maitland.

On Thursday, the volunteers drove nearly two hours in a minivan with the two eagles to meet with a licensed wildlife rehabilitator.

It was time to release them.

Once it was time for their release, the unnamed eagle’s hood came off sooner than expected, showing an eagerness to leave.

The second one — Feisty Mike — remained calm until Ingrid Scales was able to move away from the minivan, take off the blanket, and unfold the hood making him able to fly away.

Both eagles were safely released.

Elliot is a reporter for WUFT News who can be reached by calling 352-392-6397 or emailing news@wuft.org.
Previous The Point, May 13, 2022: Some delivery services are tightening their radius with fuel prices climbing again
Next Pace Center for Girls and a local artist unveiled a mural promoting safe driving