The only people being charged in these cases are the inmates who registered to vote while they were ineligible to do so, said Darry Lloyd, chief of investigations at the State Attorney’s Office for the Eighth Judicial Circuit.

“Nobody from the supervisor‘s office will be charged,” he said.

The number of those charged now stands at nine after four more indictments were revealed late Wednesday.

The results of the investigation reveal a flawed voter registration system in Florida, nearly two years after dueling court battles over how to implement a state constitutional amendment that allowed felons to vote legally without going through a complex process to have their rights restored. Felons, who prosecutors said were ineligible, registered to vote without being flagged by Tallahassee elections officials for years.

Three of the four men in the latest cases registered to vote from inside the county jail during registration drives organized by Alachua County’s Democratic elections supervisor, Kim A. Barton, in February and July 2020.

Two of the men indicted Wednesday said they were surprised to learn they had been charged. When interviewed by investigators, both men said they were told the target of the investigation was an employee with the Supervisor of Elections Office.

Daniel Dion Roberts, 48, of Hawthorne said someone visited him in jail identifying themselves as a voting official. He said he did exactly what the official told him to do and even helped him fill out the registration form.

“I had officers come and speak with me about something about them investigating the man that came to the jail,” he wrote from prison. “I haven’t heard about charges. Now I’m worried I don’t have a lawyer and can’t afford one. I’m in prison for three more years at least.”

“I was contacted by the Federal Department of Law Enforcement last year, [they said] they were investigating the supervisor of elections, not the people that actually voted,” he said.

Rivers said a man — who identified himself as a Supervisor of Elections office employee —  visited the Alachua County jail and made several announcements encouraging felons to register to vote.

“They actually helped us fill out the voter rights registration forms. They came in and recruited us to vote, and then you know, told us that we could vote and now they’re charging us for voting,” Rivers said.

Rivers said the man informed him he could still vote as felon, as long as he wasn’t accused of burglary or murder, and did not mention anything about restrictions for owing court fines.

Rivers said he had not voted in the three previous elections because he knew he was ineligible. But after speaking to the Supervisor of Elections representative, he believed that he was cleared and now blames the employee for his latest legal woes.

“He shouldn’t have been in there signing people up and telling them stuff if he didn’t know what he was talking about.”

Ongoing investigations have also focused on Duval, Gadsden, Lake and Leon counties. Although Lake County is reliably red, those others are among the few in Florida that lean heavily Democratic. Reliably blue, Alachua County – home to progressive Gainesville and the University of Florida – was among only 12 of Florida’s 67 counties that voted Democratic in that election.

All nine men charged this week completed their voter registrations in 2020, listing the Alachua County Jail as their home or mailing addresses. None were serving time in prison at the time of the election but all still owed fines from previous charges, according to court records.

Many of the voter registrations in question corresponded with visits to the jail on at least two occasions in 2020 by T.J. Pyche, the former director of communications and outreach for the county supervisor of elections. Pyche declined this week in a phone interview to discuss the case. He resigned from the agency in July, shortly after the state investigation began.

Pyche’s lawyer, Ron Kozlowski, said his client was not aware that any of the men charged this week were ineligible to vote.

Not all of those indicted blamed Pyche for their charges.

“I did vote and some people came to talk to me,” said Therris Lee Conney Jr., 33, of Gainesville, in an email from a Florida prison where he is serving a five-year sentence on unrelated drug and weapons convictions from October 2020, weeks after he registered to vote as a Democrat.

“About the guy who help us vote he did nothing wrong tho,” Conney wrote. He said he was unaware of the voter fraud charge levied against him this week until contacted by Fresh Take Florida, a news service operated by the University of Florida College of Journalism and Communications.

Conney said he believed he was legally eligible to vote.

Florida’s rules place the burden on felons who have finished serving their prison sentences to research whether they still owe any unpaid court fees that would make them ineligible to register as voters or cast ballots.

In one of those legal disputes, a federal judge in Tallahassee noted there is no centralized office tracking fines and fees across courts in Florida’s 67 counties. Amounts owed in older court cases – or in felony cases in other states – can be especially difficult to determine because court records might not be immediately available.

If felons can’t determine on their own, they can request an advisory opinion from the Florida Division of Elections, where government lawyers would investigate to look for unpaid debts and tell a potential voter whether they can legally register.

“It’s really difficult to know if you’ve paid these things off,” said Daniel Smith, the chairman of the political science department at the University of Florida who has testified in voting rights cases against the DeSantis administration. “The system is a disaster. People think in good faith they’re eligible and find out they’re not.”

Those charged late Wednesday include:

Carolina is a reporter for WUFT News who can be reached by calling 352-392-6397 or emailing news@wuft.org.
Previous ‘Better together’: Minority women-owned businesses flourish in Gainesville
Next The Point, April 1, 2022: Prosecutors say only inmates, not election workers, will be charged in jailhouse-related voter fraud cases 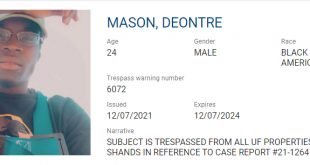