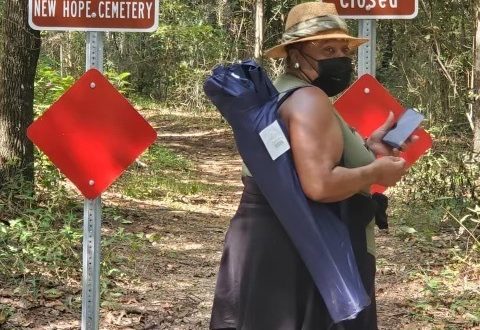 In this Oct. 1, 2021, photo provided by Gloria Jefferson Anderson, an activist working to preserve abandoned Black cemeteries, Ms. Anderson stands on the path leading to the woods at New Hope Cemetery in Tallahassee where generations of former slaves and tenant farmers were put to rest. Ms. Anderson is sharply criticizing Florida lawmakers for killing a proposal that would have helped identify, protect and restore burial grounds across the state. (Gloria Jefferson Anderson via Fresh Take Florida)

A leading advocate for abandoned Black cemeteries sharply criticized Florida lawmakers for killing a bill that would have helped identify, protect and restore burial grounds across the state.

“I want to know, many of these legislators, where are they from?” asked Gloria Jefferson Anderson, who is leading the cemetery restoration project in Tallahassee. “Can they identify where their ancestors are buried? Because if they couldn’t, they would understand what we’re trying to do here. We’re trying to find our ancestors and give them a decent memorial.”

The “Abandoned and Historic Cemeteries” bill, sponsored by Rep. Fentrice Driskell, D-Tampa,  passed unanimously in three House committee hearings. Both Republicans and Democrats supported it. But it was pronounced dead earlier this week without a full House vote. A companion bill in the Senate, sponsored by Sen. Janet Cruz, D-Tampa, never made any progress.

The lack of action on the legislation stunned supporters and the reasons for its demise were not clear. The 60-day legislative session, ahead of November’s elections, was marked by unusually divisive issues, with lawmakers passing only 285 individual bills out of 3,735 under consideration.

The House bill would have enacted some recommendations of a state task force that spent a year researching abandoned cemeteries and holding public hearings around the state. It would have created the Office of Historic Cemeteries within the Department of State to focus on restoration and research efforts for all abandoned cemeteries, not just those of African Americans. It also aimed to allocate $200,000 a year to staff the office with three full-time employees.

Cruz did not respond to an email seeking comment.

“The place where they said no to this bill, this used to be a plantation,” Anderson said in an interview. “Slaves built the Capitol!”

It is likely that slaves helped build the old Capitol building in 1845, according to historians, although there is little documentation available.

“Perhaps legislative review of Florida’s history needs to be taught to senators,” Anderson said. “Leon County had over 12,000 enslaved persons. They had to be buried somewhere on these plantations.”

Anderson, 74, recently traced her father’s side of the family back to New Hope Cemetery, an abandoned African-American burial site located behind Testerina Primitive Baptist Church in Tallahassee. She said that obtaining funding is crucial in the restoration effort so that slave descendants, like herself, can have closure.

For Driskell, her effort on the issue began in 2019 when Zion Cemetery was discovered in Tampa under some warehouses, a tow lot and public housing. Zion is just one of the Black burial grounds that have in recent years drawn the attention of researchers, academics, local officials, descendants and others.

Across the United States, hundreds of lost cemeteries have been rediscovered, some under parking lots and schools.

Cruz has said that, based on estimates by state archaeologists, there are nearly 3,000 abandoned African-American cemeteries in Florida that have yet to be identified.

Though the proposals failed, the Legislature approved $750,000 in the new budget to start an African-American Cemetery Education program in Tampa Bay, which includes Driskell and Cruz’s hometown.

The program is intended to “preserve local African American history and cemeteries through place-based educational programming, curricular material to be embedded in K-12 classrooms, teacher professional development, and community workshops,” according to the funding request.

“We’ve got to keep this moving,” Anderson said. “It was an honor for me to have found my father’s ancestors, and especially their burial ground. There was something mystical about that area… you could feel a spirit… almost them whispering to us, ‘Thank you, thank you for finding us.’”

This story was produced by Fresh Take Florida, a news service of the University of Florida College of Journalism and Communications. The reporter can be reached at agalo@ufl.edu.

Amy is a reporter for WUFT News who can be reached by calling 352-392-6397 or emailing news@wuft.org.
Previous University of Florida student accepts plea deal in sexual assault case
Next The Point, March 18, 2022: Following passage of record Florida budget, governor suggests vetoes are ahead

A traffic stop ended in a Gainesville Police K9 ripping out his eye. Terrell Bradley’s story is more than the police report

The voter registration and party affiliation change deadline for the primary is July 25.