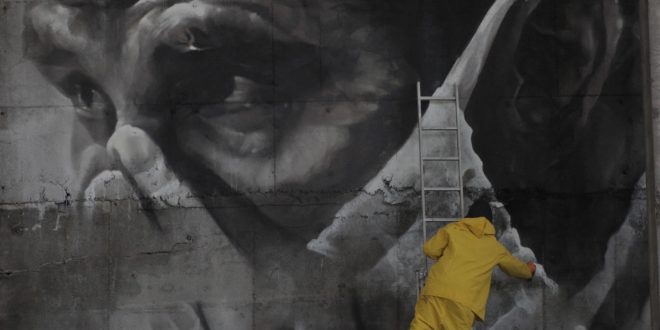 "A 2016 mural at the Chernobyl site commemorates 30 years since the nuclear accident. The mural was painted by Australian artist Guido van Helten as a part of the Art United Us project, curated by Iryna Kanishcheva and Geo Leros." (Photo by Geo Leros, courtesy of Iryna Kanishcheva)

‘The threat to the whole globe’: A Gainesville art curator from Ukraine reacts to attack on nuclear power plant

From an art curator in Gainesville to scientists along the U.S., people everywhere were still concerned about Russia capturing the Zaporizhian nuclear power plant in southeast Ukraine.

Shelling caused a fire to break out at the power plant on Friday, and although none of the reactors or essential components were damaged, the incident raised concerns worldwide.

The plant is the largest nuclear power plant in Europe and responsible for providing half of Ukraine’s nuclear energy and 20% of its electricity overall. As of Sunday morning, two of the six reactors at Zaporizhzhia were operating, and radiation levels were normal.

Iryna Kanishcheva is an art curator living in Gainesville but originally from Lviv, Ukraine. She is the founder of 352walls, a public art project managed in cooperation with city government, and has worked on many mural projects around Gainesville and elsewhere. She said she wasn’t familiar with the Zaporizhzhia plant, but she remembers the Chernobyl nuclear disaster happening when she was 5 years old.

“That caused a lot of deaths and disease and cancer and many other outcomes,” Kanishcheva said. “And now, when we, like literally, just got cleared from that radiation – almost – there is a threat to get another disaster, and it’s not a threat to Ukraine anymore. It’s the threat to the whole globe, you know, the whole planet.”

Ed Lyman, director of a nuclear safety project for the Union of Concerned Scientists, a U.S.-based nonprofit that advocates for scientific solutions to world issues, expressed “grave concern” in the hours after Russia captured the Zaporizhian plant.

Lyman particularly took issue with U.S. Secretary of Energy Jennifer Granholm’s assessment of the situation. The reactors “are protected by robust containment structures and reactors are being safely shut down,” Granholm said in a statement.

Lyman disagreed: “No nuclear plant has been designed to withstand the potential threat of a full-scale military attack, and the plants in Ukraine are no exception. It’s important for the U.S. as well as others in the international community to be frank about what the risks are.”

Damage to the facilities, whether to the reactors themselves or to critical support systems, such as electricity at the plant, could have serious consequences, Lyman said.

He said he does not believe that it’s in anyone’s interest for the plant to be damaged, calling the military operation so close to the facility “reckless.”

According to a statement on the State Nuclear Regulatory Inspectorate of Ukraine, the military operation could cause an event that “may exceed all previous accidents at nuclear power plants,” including the accidents at Chernobyl in 1986 and Fukushima Daiichi in 2011.

Physical damage to the reactors themselves is not necessary for a nuclear accident to occur. During the Fukushima accident in 2011, nuclear meltdowns happened because the cooling systems for the plant lost power, causing the reactors to overheat.

Russia also captured the Chernobyl plant the day of its invasion, Feb. 24, and there are concerns about the staff there as well. An update from Ukrainian inspectorate said the the staff who had been working that day have been there for at least 11 days without a shift change.

Lyman said it’s not possible for the operators to simply turn off the power to the reactors and walk away, as safely cooling down reactors can take several months.

“This could lead to fatigue, compounded by the stresses of working under duress, and that could lead to another dangerous situation with operator inattention or fatigue leading to mistakes,” he said. “How that problem is going to be solved remains to be seen.”

Kanishcheva said she had the opportunity to work on a mural at the Chernobyl site, depicting a doctor in shock from what he saw as a result of those events. She said that she wanted her art to raise awareness about the situation so that action would be taken.

Nicole is a reporter for WUFT News who can be reached by calling 352-392-6397 or emailing news@wuft.org.
Previous Gainesville artist sculpts the future while honoring the past
Next Gainesville city commissioners are split on how to tackle municipal broadband