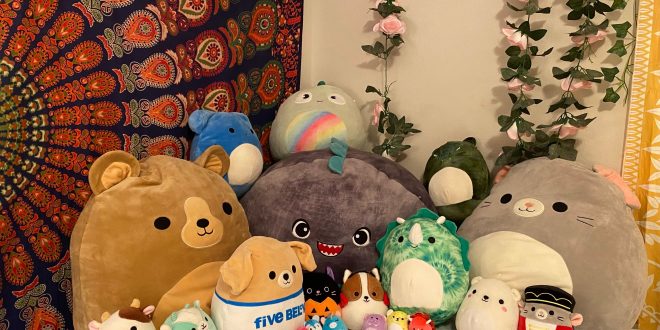 Squishmallow collector Abbey Ladwig-Conway joined a growing line of self-proclaimed “squish hunters” outside of Five Below on Halloween morning.

Ladwig-Conway heard the girl standing behind her say that she’s willing to push people and cut the line to get what she wanted — a 5-inch stuffed Halloween character.

Much like the Beanie Babies furor of the 1990s, the Squishmallow craze has been spreading across the country, including in Gainesville, and is expected to get worse over the holiday season.

“I was just standing with these girls hearing them plan this and I’m thinking, ‘It’s just not that deep,’” Ladwig-Conway said.

Once the store opened, the girls elbowed their way into the store. The crowd followed suit. People plowing by one another to get ahead in line.

This has become a normal scene for the Gainesville Squishmallows community, which is part of a national fad to collect the stuffed animals, trade them and show them off as prized possessions in groups online. The crowds that gather for Squishmallow releases include people from all ages, but the majority of collectors are teenagers and college-aged adults.

The Squishmallows sensation started in 2017, with the initial release of a line of eight oval-shaped stuffed animals that came in 8-inch, 12-inch and 16-inch sizes. Retail prices range from $5 to more than $100 for some of the larger ones. However, the resale value for these toys can go much higher.

Users on sites such as eBay, Mercari, Facebook Marketplace and others have began purchasing Squishmallows to resell them for marked-up prices online, causing upheaval and controversy in the collector community. These people are often removed from Squishmallow hunting Facebook groups. Resellers have also gained a reputation of being more aggressive at Squishmallow release events, like the one Ladwig-Conway attended at Five Below.

“It was kind of sad in my opinion,” Ladwig-Conway said. “I mean I get the appeal, but I never go to the length of pushing kids. At the end of the day, these are toys.”

Facebook groups have been made for collectors to buy, trade and sell parts of their collections; users also post to let others know when new Squishmallows are hitting the shelves.

The appeal has spread across the nation, including Gainesville, where vendors such as Walgreens, Target, Cracker Barrel, Dollar General and Five Below struggle to keep the prized toys on their shelves -- with some stores reporting stock being cleared out within 48 hours of its arrival.

The quick sellouts and reselling bear a remarkable resemblance to the popularity of TY Beanie Babies in the 1990s. Both brands produced plush toys that gained notoriety for having rare releases and a high resale value.

“Part of the reason I collect them is the fact that they’re so rare, and if you find one you say to yourself, ‘OK I might not ever see this again,’” Maria Flores said.

“They know what to do for the interests of people,” Flores said. “I would say the collections and collabs get our attention. I know they have a Nightmare Before Christmas collaboration, which I feel is aimed more for older people and the generation that were kids when that movie was popular.”

Lori Verderame, an antique appraiser with a doctorate in art history, has made a name for herself appraising collectibles, including Beanie Babies and Squishmallows.

“Both Squishmallows and Beanie Babies are made of great quality materials, and if they’re not, they’re not going to hold up and probably will not be collectible,” Verderame said.

Verderame said the quality of the toy, condition, and market interest are what she looks for when appraising plush toys, as they are the three most valuable assets of a collectible toy. The values are then based on sale records.

With so many different types of people taking interest in plush toys such as Beanie Babies and Squishmallows, the market is going to capitalize on rarity and collectability.

Originally, Squishmallows was marketed to children, but it has a large adult following.

Squishmallows have collaborated with brands to make a variety of collections, including Hello Kitty, Marvel, and Disney Princesses. Verderame said these toys often serve as a distraction from violent or troublesome times in the world. Beanie Babies were popular during and after several conflicts worldwide in the late 1980s and 1990s.

“I think Squishmallows are similar,” she said. “We have had a time of great divisiveness and division in the country, and so these toys that are collectible and lovable are something that comes back into the public interest during these times.”

With the pandemic and politics causing unrest recently, many, including collector Ladwig-Conway, took to Squishmallow collecting as a way to deal with the harsh world around them.

“I feel like a lot of people during quarantine kind of regressed to things that they enjoyed during their childhoods,” she said. “They’re really comforting items. They’re soft, they’re cute, they’re plush. In a situation where we are not in the best state of the world, I think adults are paying more for things that can comfort them.”

Josie is a reporter for WUFT News who can be reached by calling 352-392-6397 or emailing news@wuft.org.
Previous The charcuterie board business in north central Florida is raking in the cheddar
Next President Biden Outlines Plan To Address Surging COVID-19 Cases 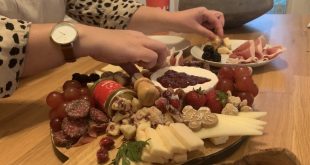 The hashtag “charcuterie” has 2.1 million posts on Instagram and 770 million views on TikTok. A Google search of charcuterie nets 75 million hits. Sales of pre-packed boards increased in 2020 by more than 40% over 2019, according to Michael Uetz, a principal of Midan Marketing.