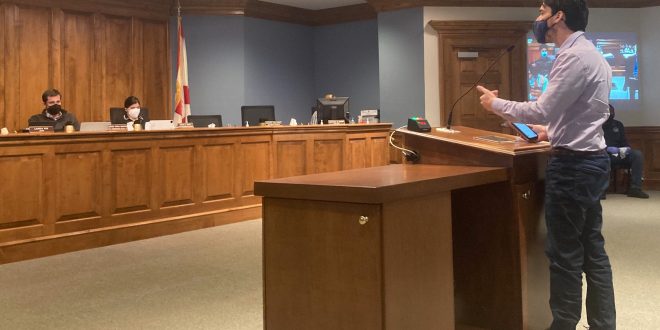 The Gainesville City Commission met Monday to decide how to spend what remains of $32 million in federal relief money, reviewing scores of proposals but approving just four projects costing a combined $4 million.

The commission also greenlit 10 proposals which need more planning before they can be approved, including installing broadband internet across Gainesville, a mobility hub in East Gainesville to decrease commutes and a program aimed at reducing gun violence.

If approved, these projects would spend more than $15 million in ARPA funds.

In May, the commission opened public involvement in the spending of the money to local nonprofit organizations. The federal funds need to be allocated by December 2024 and spent by December 2026. The city has already approved money for nonprofit grants, utility debt forgiveness, eviction assistance and low-income home weatherization.

After the meeting Monday, the city now has $18 million in federal dollars to spend.

Gainesville received the first half of its funds in July and is set to receive the rest in July 2022, Mayor Lauren Poe said.

“With the limited funds we have left between now and July 1, what do we do?” he asked the commission.

Commissioner Reina Saco was among those commissioners who said it would be wise to order more PPE for public employees now, as the city’s reserves are running low.

Jon DeCarmine, director of the GRACE Marketplace homeless resource center, said the city is in dire need of more affordable housing and safety nets to catch those slipping into homelessness.

“GRACE is hoping to use these funds to not only bolster the services that were already offering, but in a lot of ways, to prepare for the pending wave of people who may be evicted but have not yet,” DeCarmine said.

In September, city and Alachua County leaders moved forward on a 10,000-square-foot urgent care center in East Gainesville, in partnership with UF Health.

The city commission will contribute $2.3 million to the project using ARPA funds.

But Commissioner Desmon Duncan-Walker, one of the center’s biggest proponents, voted against pledging this money.

“I’d like to see UF partner with us a little bit differently,” she said.

Commissioner Adrian Hayes-Santos drove the push for installing broadband infrastructure around the city.

“Education has changed dramatically, healthcare, how we socialize has changed,” Hayes-Santos said. “And I think we have to address that, because it’s not something that’s going to go away.”

He said the project, totaling $9.6 million, would reach 10,000 low-income homes across the city.

“Every day that we continue to deliberate as to whether this is something we want to move forward on is another day that we are not actively going out and working with our community partners,” Eastman said.

The commission also decided that dispersing these funds posed too great a challenge for city staff. They directed city staff to search for an outside firm which would oversee “soliciting, vetting and recommending funds to nonprofits,” according to meeting documents.

That vendor would be responsible for helping the city provide $7 million to local charities.

Interim City Manager Cynthia Curry said she expects the partnership to be finalized by early January, and for the city to accept more proposals from the public soon after.

“My gut would be March 1, we will be rolling,” Curry said.

Public comment during the meeting focused on the cost of outsourcing this labor to a third party.

Poe pushed back against suggestions to manage these funds within the city.

“It’s a legitimate question whether we should handle this all internally or not,” he said.

Commissioner Harvey Ward agreed that the city doesn’t have the infrastructure to get this money to nonprofits and residents.

“I want this to be a process that, when done years from now, we look at look back on and say, ‘Every dime of that money was spent the way it was intended, and that changed and saved lives in the city of Gainesville,’” Ward said.

Discussion shifted to the city’s interest in bringing a grocery store to East Gainesville, where advocates and city leaders agree there is a food desert.

In June, the commission offered Fred Washington, a Jacksonville real estate developer, a $3.3 million loan extended over 10 years to open a Bravo Supermarket.

But Curry said one development partner has pulled out of the deal, and another is expected to follow.

“So that project right now is tentative and problematic,” she said.

Because of the uncertain state of the grocery store, the commision agreed to step away from it until a concrete plan emerges.

“At some point, if it doesn’t get better, we will go back and reevaluate whether that’s a thing that’s possible,” Ward said. “But I don’t think we’re at that point yet.”

Jack is a reporter for WUFT News who can be reached by calling 352-392-6397 or emailing news@wuft.org.
Previous Operation Santa Delivery event returns to Santa Fe College for the first time since 2019
Next Alachua County Commission opposes Clemons’ bid to reorganize, expand it